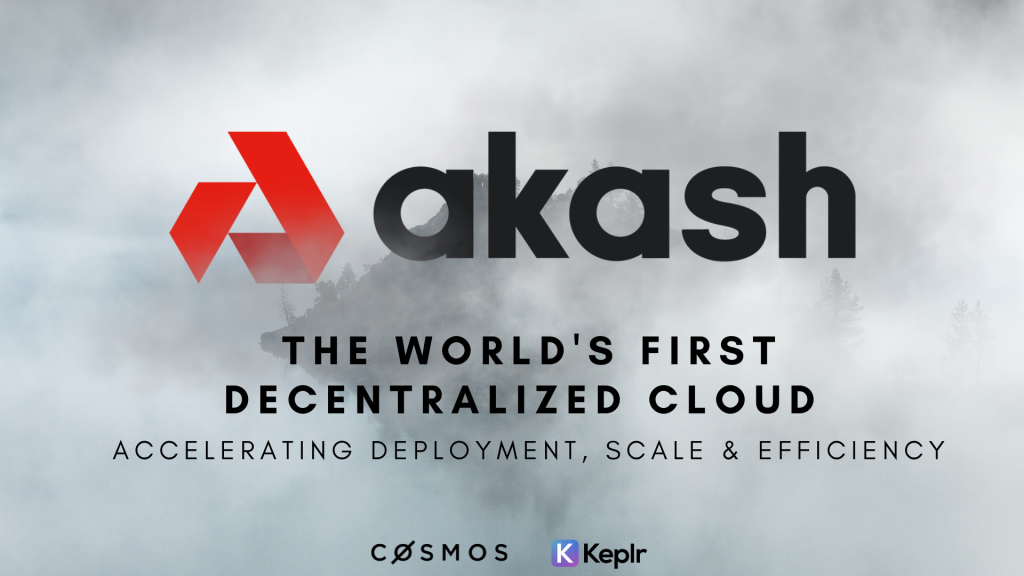 Akash Network is the world’s first decentralized and open-source cloud. Building the future of cloud computing, the network aims to accelerate deployment, scale and price performance for high-growth industries like blockchain and machine learning.

Powered by the AKT token, the network connects those who require computing resources with those who have capacity to lease them.

Akash works like a traditional cloud, the only difference is the computing that the network sources are not owned by a single entity but rather a distributed network of cloud computing data centres who provides them.

Akash Network envisions a world where cloud computing is permissionless and sovereign. This way, builders will have greater freedom in expanding human experiences.

Developers who leverage on the platform would be able to access cloud computing at up to 3x less than the cost of centralized cloud providers like AWS (Amazon Cloud Services), Google Cloud and Microsoft Azure.

It also utilize containerization, where it leverages on 85% of underutilized cloud capacity in 8.4 Million global data centres, enabling everyone to buy and sell cloud computing.

The team behind Akash Network

Apart from the other members in the team, Akash Network also have a pool of advisors from notable companies.

They have also received backing from multiple venture capital investors.

Traditionally, companies would buy a bunch of servers to enable their web pages to be used by the end users and act as an alternative form of data storage. These servers are the engine for the entire website to work.

It might not be practical for companies now to buy their own servers as the likelihood of them having strong expertise is low. Instead, they would out-source this function of their business to eg. AWS, Google Cloud so they could focus on their core product and pay a cheaper price for the service.

Cloud based services however can go down and crash applications. Most cloud deployment offer redundancy services (deploying application on multiple servers in case one crashes), but it might not be sufficient if the entire organization is targeted.

For this very reason, the birth of the multi-cloud protects the deployment of applications/websites on multiple cloud platforms.

Akash Network is built with inherent censorship resistant qualities allows anyone to offer their machines as servers on a network.

The infrastructure running the blockchain protocol is designed to be decentralized with 100 different validators who produce blocks — making it impossible for a single entity to shut down multiple chains.

An amazing feature of Akash is that it enables access to the multi-cloud all on one platform. Whereas conventional cloud platforms require you to use a different company to use the multi-cloud, you can deploy on entirely different and unrelated providers on Akashnet.

With its network being open sourced, permissionless, and sovereign, it offers access to the previously inaccessible raw power of the cloud computing we have today.

IBC has been developed as part of the greater Cosmos Network ecosystem by IBC contributors which include Tendermint (software for securely and consistently replicating an application on many machines).

In its simplest form, IBC is connecting different blockchains together.

IBC is a critical element to the Cosmos framework connecting sovereign blockchains. This creates tremendous value to the network, beyond the obvious ability to swap tokens and information.

Paired with the Tendermint BFT engine, Cosmos SDK, and other tools, developers can scale blockchains with speed, security and interoperability within or outside of the Cosmos network.

This kind of versatility can be a powerful incentive for new or existing blockchains to build with or connect to Cosmos via the IBC protocol thereby growing the value of the Cosmos network, in addition to its capability and utility.

Tapping on the IBC compatibility of Cosmos, there is no other place Akash Network could build on based on how their network functions.

With a total of 60,000 deployments, nine partnerships, seven new listings, and a handful of new product features 2021 was a big one for Akash Network.

Even though 2022 started with a bear market, it might have been one of the stronger months for Akash.

They saw consistent growth in their daily active deployments and powered dApps include decentralized exchanges of Osmosis, NFT gaming for strangeclan and OmniFlixNetwork in the media space.

ColdStack, a decentralized cloud aggregator offers a portal to access any decentralized storage network such as Filecoin, Crust, Sia, Arweave, Storj, among others.

With a shared vision for a decentralized web, ColdStack has announced plans to deploy on Akash in order to expand its node network capabilities and scale.

Find out more on the partnership below:

Kraken – Kraken announced they have listed $AKT. This is the first instance of a native Cosmos SDK (non-ERC20) token being listed on a major centralized exchange (CEX).

For more of the technical projects for developers/providers on Akash Network in their 2022 roadmap, check out their website here.

In my opinion, the utilization of cloud technology combined with blockchain technology will deliver endless possibilities within the crypto space.

They also bring huge potential to DeFi web apps where its back-end are: serverless, permissionless, trustless environments. Akash changes the game by offering an opportunity for decentralized cloud and decentralize finance to coexist beyond a form of storage.