All You Need To Know About Hedera $HBAR: Is It The Most Undervalued Token In 2022? 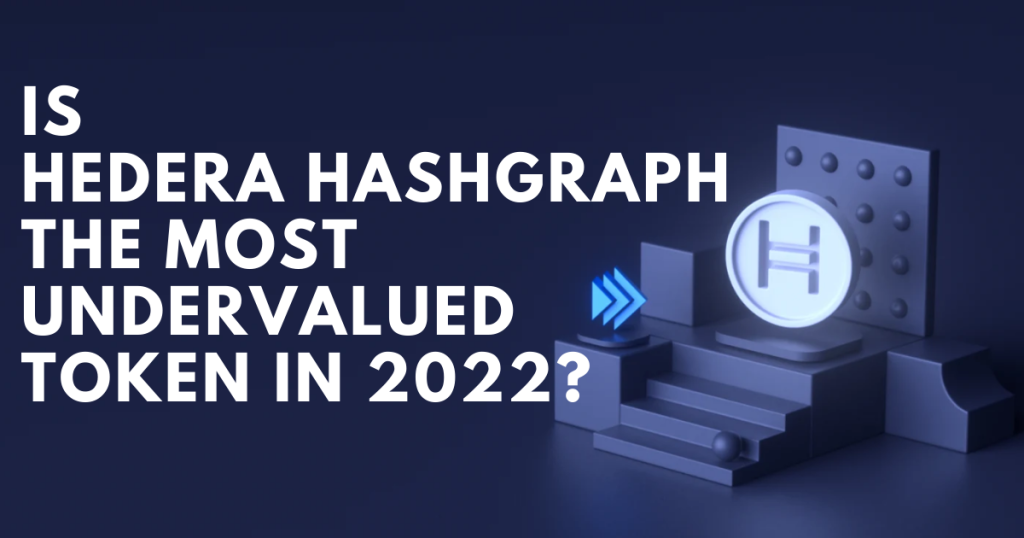 What is Hedera Hashgraph $HBAR?

Hedera Hashgraph is a cryptocurrency network seeking to serve as a platform on which individuals can transact and deploy applications.

The Hedera Technology is not a blockchain consensus mechanism. Instead, they build consensus in having a public ledger.

Hedera is the only public ledger that uses hashgraph consensus, a faster, more secure alternative to block chain consensus mechanisms.

However, it still retains properties of being a “trustless” system by storing a copy of its ledger on every node in its network like a blockchain.

On the 30 day chart, $HBAR is up 19.7% and 427% on the annual scale, underperforming compared to most of the other cryptocurrency projects.

How does HBAR work?

To ensure all the computers in its distributed network agree on its transaction history, Hedera Hashgraph uses the Hashgraph consensus mechanism, powered by two types of nodes.

Consensus nodes determine transaction ordering and history, while mirror nodes relay this information to other stakeholders throughout the network.

This differs from how most traditional blockchains achieve consensus, in which the state of the blockchain is determined by users who propose blocks to be added to the chain in a market competition open to anyone.

Hedera Hashgraph is governed by a body known as the Hedera Governing Council, which is charged with running the consensus nodes that determine transaction ordering.

As of 2020, a total of 39 members sit on the council, including Google, IBM and Boeing. The council’s role is to manage the software, voting on changes, ensuring funds are allocated correctly and safeguarding the network’s legal status in various jurisdictions.

The supply of HBAR tokens is fixed at 50 billion which was created when the network launched in 2018. Some HBAR tokens will be distributed through a process called “proxy staking,” in which any HBAR holder will be able to lock their cryptocurrency in special contracts, allocating those funds to one of the approved nodes on the network.

By staking HBAR with another node, users would gain the ability to earn a slice of the rewards and fees these computers receive from processing transactions on Hedera Hashgraph.

The Hedera network achieves 10,000 HBAR cryptocurrency transactions per second, in a single shard and on-ledger, without compromising on network security or stability.

Hashgraph consensus is incredibly lightweight, allowing for the cost per HBAR transaction to be very small, around US$0.0001.

In combination with high throughput, micropayments using a token on Hedera, or $HBAR, is a practical reality.

HBAR transactions achieve finality, on-ledger, within three to five seconds. Their aim is to bring confidence in payment settlements and offer modern digital experiences within your application.

HBARs are used as “fuel” to pay for network services. They are also used to incentivize nodes and contribute to computing resources to the network. End-users must pay a certain fee to use the network.

Hedera proceeds toward permissionless nodes. This allows HBARs to protect the network from cyberattacks through the network’s forthcoming proof-of-stake, coin-weighted consensus mechanism.

Around 46% of the network’s 50 billion HBARs had been allocated, with the remaining 54% held in the Hedera Treasury when HBAR first came into existence.

Hashgraph is a data information and consensus algorithm that adopts concepts such as gossip about gossip and virtual voting to achieve faster and secure transactions. It claims to overcome gaps in the blockchain system as they form a peer-to-peer platform that eliminates the need for complete transactional operations.

Known for its speed, this technology can handle thousands of transactions per second and verify over a million signatures per second. The worth and authenticity of this technology may very well take the title of ‘the new generation of blockchains’.

Gossip about gossip protocol sends information between nodes of the network. The nodes send data to random members in the network with the history of its previous transaction, resulting in the circulation of all the information amongst all members.

For a detailed explanation gossip about gossip protocol, Max Maher’s explains more here. Main differences between a blockchain and Hashgraph may also be found more in Amarpreet Singh’s article.

This has associated costs of bandwidth, compute, and storage, for which the node receives HBAR as compensation. Node operators can sell the HBAR they’ve earned for other cryptocurrencies or FIAT through an exchange.

Developers and end users can purchase HBAR from third-party companies and platforms if ever they choose to integrate into the Hedera ecosystem. They could also use HBAR for multiple utilities such as purchasing goods and services to payment of application transaction fees.

Those with HBAR can proxy stake (coming soon) them to a Hedera network node which will maintain the security and integrity of Hedera’s network operations. At the same time, earning the proxy staker a small share of transaction fees.

$HBAR offers organization an opportunity to embrace disruptive public distributive ledgers for payments in a secure and compliant manner. This would include settlement efficiency and creating liquidity for new and growing markets.

Hedera enables high-throughput, verifiable logging of business transactions, as well as decentralized identifiers that adhere to the W3C Decentralized Identifier (DID) standards, for any new or existing application. This ensures all participants are trusted and associated systems have a real-time view of transactions used for predictive analysis and detection of fraudulent activities.

Permissioned blockchains offer a means to control the logic and sharing of information within a set of known and authorized parties.

Popular blockchain frameworks, such as Corda, Hyperledger Fabric, and Quorum can connect to Hedera to achieve decentralized trust without exposing its contents. Using Hedera Consensus Service, for each update of the permissioned blockchain, a transaction hash is sent to the Hedera public ledger. This now immutable transaction hash ensures transaction information remains private while being fully auditable by authorized parties.

Credentials capture identity attributes, skills, and qualifications and so determine authorization to software and systems. Key moments in a credential’s lifecycle can be recorded using Hedera Consensus Service to add transparency and certainty for each stage.

Hedera aims to amplify trust around data compliance by providing a publicly auditable log of actions taken and to provide tools to consumers to audit their own data. This would simplify auditing while removing 3rd party intermediaries.

The Hedera Token Service enables the configuration, minting, and management of fungible and non-fungible tokens on Hedera with ease, without needing to deploy a smart contract. Custom tokens are as fast, fair, and secure as HBAR and cost less than USD$0.01 to transfer.

One thing to take note on the Hedera network is its closed source nature. This network is shielded from the public and controlled by big institutions with its financial backing. These institutions sits on the governing board of the Hedera Council to influence decisions, one example is their ability to influence the removal of smart contracts in its network.

They forefront the hashgraph technology which provides massive improvements as a layer 1 solution. The first player in the hashgraph space, their technology could be the next new wave in the cryptocurrency space. Accompanied by its function of being a 3rd generation public ledger, they certainty fall in the category of being undervalued.

However, Hedera positions itself mainly to support institutions and government bodies with their technology. Their roadmap toward corporate gravitas leaves them with a small community following within the cryptocurrency community which could be their biggest challenge in 2022.

In my opinion, HBAR is an undervalued token as a great layer-one solution, however it is evident the company has little wind under their sails from the crypto currency community. Perhaps the one most thing they they could built on in 2022 to see massive price action.