Was It A Necessary Evil? How The Balloonsville Rug Pull Made The Solana NFT Space Safer 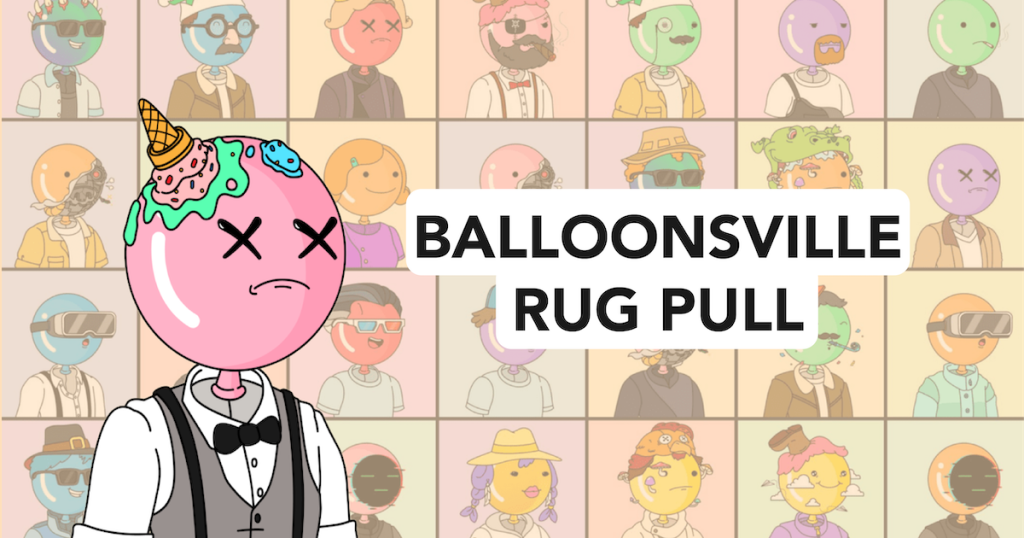 Over the past year, rug pulls have become an unwanted, yet permanent resident of the NFT space. This January alone, we saw two of the biggest rug pulls across Ethereum and Solana.

Frosties and Big Daddy Ape Club each robbed investors of around US$1.3 million worth of cryptocurrency. The project founders never followed through on their proposed roadmap and deleted their social media accounts as soon as the mint was completed.

One would imagine there’s nothing desirable about a rug pull. It’s no different to robbing a bank. Are there any exceptions to this case though? Could it be argued — perhaps, by people who’ve watched Money Heist — that sometimes, robbing a bank is justified?

The curious case of Balloonsville

In February 2022, a Solana NFT project called Balloonsville was primed for a spectacular launch. In just a month, it had built up a Twitter following of over 20,000. On top of that, their Discord group was so active that it was hard to even get a word in.

The premise of Balloonsville was to give power back to the community. Most of the revenue would be stored in a treasury, called the Balloonbank, and NFT holders would get to decide how it’d be spent in the future.

The project was set to make 5000 SOL — around US$450,000 at the time — from it’s initial mint. In the days leading up to the mint, it was featured on the homepage of Magic Eden, Solana’s biggest NFT marketplace and launchpad.

To no one’s surprise, Balloonsville sold out immediately. Not only that but the floor price multiplied by over 4x as more investors tried to buy-in through the secondary market. Over the next day and a half, Balloonsville reached a floor price as high as 4.8 SOL.

Then, the founders decided to pull the rug.

A rug pull unlike any other

Unlike typical rug pulls, where the projects’ website and social media pages go dark immediately, the Balloonsville founders decided to get one last word in.

They revealed that they were part of the same team which had rugged another Solana NFT project, Doodled Dragons, in January.

Doodled Dragons had promised buyers that all profits made from the project would be donated to charity. However, once the mint was completed, they revealed that they’d be keeping the funds for themselves instead.

With Balloonsville, although they were pulling the rug yet again, it was a different approach. The team wasn’t actually keeping any of the money for themselves.

In fact, they hadn’t even received it yet. Since they had used Magic Eden’s launchpad to mint the project, the funds were still with the NFT marketplace.

The Balloonsville founders berated Magic Eden for their lack of due diligence when allowing people to use their launchpad.

Apparently, Magic Eden had allowed Balloonsville to launch without requiring any identity proof from the founder or a proof-of-concept for their roadmap.

Many replied in support, stating that Magic Eden was only concerned with their share of mint revenue. They weren’t looking out for the best interests of their customers.

After facing immense backlash from a community, Magic Eden tweeted a day after the rug pull in an attempt to make amends.

The platform announced that all current holders, as well as minters who had sold below the mint cost of 1 SOL, would be able to claim a full reimbursement.

However, those who purchased for higher prices on the secondary market would not be entitled to claim an amount beyond 1 SOL.

Magic Eden also decided to ‘de-rug’ the projects and put up 5,000 SOL for a new team to fulfil Balloonsville’s proposed roadmap. The holders who didn’t wish to claim a reimbursement could instead trade-in for a Balloonsville 2.0 NFT instead.

As it stands, Balloonsville 2.0 is trading at a floor price of 6 SOL, and Magic Eden has been more than successful in bringing the project back to life.

Systematic changes to the marketplace

What’s more notable is how Balloonsville forced Magic Eden to take on more responsibility in protecting its consumers. While the idea of DYOR (do your own research) is always a given in the crypto and NFT space, it is in the best interests of NFT marketplaces to provide a safe trading environment.

In the week following the Balloonsville rug, Magic Eden halted its launchpad services. The platform has since reassessed the requirements for projects to be enlisted.

Furthermore, the platform holds the mint funds in an escrow account for up to 24 hours, after which they’re only transferred to the founders’ verified wallets on a centralised exchange.

There’s also a legal contract which must be signed by projects using Magic Eden’s launchpad services.

Was the Balloonsville rug justified?

It remains tough to believe that the Balloonsville founders carried out their plans with pure intentions. They might not have made money off of this mint, but they clearly had no issues stealing the Doodled Dragons funds.

If their only aim was to highlight Magic Eden’s security flaws, surely there were better channels to go through. Then again, there’s no guarantee that the platform would’ve taken standard complaints quite as seriously. As the adage goes, don’t fix it if it isn’t broken.

All things considered, the Balloonsville rug was a rare situation where just about everyone came out on top.

Those who minted the project either got reimbursed or have multiplied their investment through Balloonsville 2.0. Magic Eden have proven that they’re serious about customer security, and they remain the top marketplace for Solana NFTs. Finally, for the wider NFT community, this has served as a reminder that DYOR always applies — even when a project is backed by established brands or personalities.