From 0.08 To 769 ETH: Exploring The History And Rise Of The Bored Apes 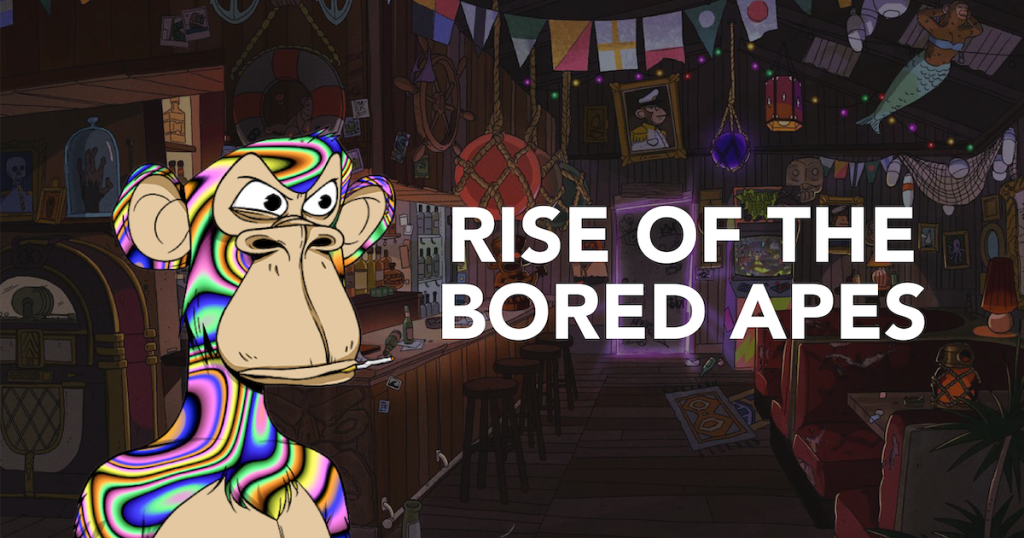 For fans of NFTs, the Bored Ape Yacht Club (BAYC) is a household name. Even for people with little interest in NFTs, this project must also still ring a bell.

It is currently the most expensive NFT collection in NFT marketplace OpenSea, with a floor price (minimum price) of 78 ETH (approximately USD205,000).

Celebrities like Jimmy Kimmel, Justin Bieber, and Stephen Curry are all proud owners of this NFT.

Let’s take a trip down memory lane, back to where it first started in early 2021.

But where did this project even come from?

The idea of Bored Ape Yacht Club came from a congregation place for bored billionaire “apes” (slang in Crypto twitter) to hang out, make memes and talk numbers.

The backstory of BAYC goes: “The year is 2031. BTC and ETH have taken over the world. Everyone who aped into crypto is rich beyond their wildest dreams. But now they are all bored and want to hang out with other like-minded apes. To do that, you need to go somewhere special.”

Interestingly enough, the 10,000 NFT collection was a flop during pre-launch. Only 650 of the BAYC NFTs were sold in the pre-launch drop.

It was only during the official launch that prominent individuals in the NFT space started taking notice, and began beating the BAYC drum.

These NFT ‘whales’ started buying BAYC by the hundreds, and accumulated over 1,000 of these NFTs. As they made their purchases known to their followers on Twitter, interest in the collection skyrocketed, and BAYC was sold out within 12 hours.

In the months after the launch, McNelis and Pranksy continued to raise awareness for the BAYC by selling their apes to prominent celebrities, such as DJ Steve Aoki and NBA Player Josh Hart.

As more celebrities got their hands on the BAYC, the project continued to grow in prominence as well.

But its popularity was not just a result of celebrity involvement.

The utilities and development of BAYC

Most successful NFT projects come with significant utility benefits, and BAYC is no exception.

Bored Ape owners received special privileges, such as access to an exclusive Discord server and ‘The Bathroom’, a digital area acting as a collaborative graffiti board.

When NBA superstar Stephen Curry bought a Bored Ape in August 2021, he even joined the BAYC Discord server for a quick chat.

The utilities did not stop there.

The kennels were given for free to holders of BAYCs as a special privilege for being a member of the club.

The Mutant Ape Yacht Club was also similarly successful, selling out within an hour after the launch, for a tidy sum of US$96 million.

At the same time, the team also randomly airdropped 10,000 “serums” for pre-existing Apes to “drink” and create zombified clones.

Besides these new collections, BAYC successfully built an incredible community around it. They organised meetups across New York, California, Hong Kong and the UK.

In fact, they have even organised a weekend of festivities for owners in New York, featuring an actual yacht party and a concert.

It was not long later that they started to blow up, and get into the sight of the public audiences and mainstream media.

It did not take long for BAYC to get mainstream attention, from art houses, pop and music industry and other big name celebrities.

In September 2021, Sotheby’s auctioned 101 BAYC NFTs for US$24.4 million. In the same month, Christie’s also sold four apes along with NFTs by CryptoPunks and Meebits for a combined total of US$12 million.

In October the same year, a virtual band named Kingship, with four BAYCs from the collection was launched. The band was signed by 10:22, a new sublabel of Universal Music.

More big-name celebrities started coming in the picture as well.

NBA superstar Steph Curry bought a Bored Ape in August 2021 for US$180,000 and uses it occasionally as his Twitter avatar, flaunting it to over 15 million followers.

Justin Bieber also posted a picture of a Bored Ape to his 220 million followers on Instagram in late January 2022, generating a huge buzz.

Perhaps one of the BAYC celebrity moments that went most viral was an interview segment between Paris Hilton and Jimmy Fallon during a Tonight Show interview.

The exchange of them hyping their BAYC ownership was stiff and awkward, yet generated huge media exposure for the apes.

Now that BAYC has reached a legendary status in the NFT space, what’s next for them?

In 2022, BAYC is also intending to drop its own $ape token, providing utility and governance to the club members.

In the world of fast moving NFT space, users are always looking for the next big thing. Whether BAYC can continue its success into 2022 and beyond remains to be seen.

But one thing’s for sure: It has proven to be a wild success and will be remembered as one of the best NFT projects till date.