How Climbing Mt. Everest Helped Covalent’s CEO Double Down On Himself 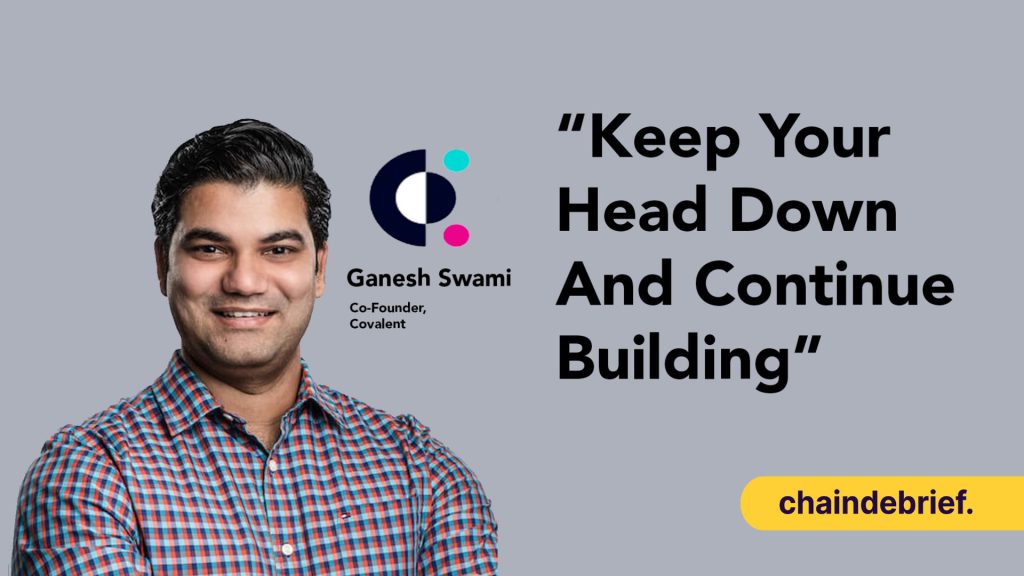 Ganesh Swami started his career as a physicist building cancer drugs, but pivoted to working in the database space.

“It’s all data, my entire career has been data-focused“

Seeing his friends starting companies and getting funding while the pharmaceutical industry went at a snail’s space made him feel that his “life was slipping away”.

However, that all changed when he attended a hackathon on a whim.

“I went to this database Hackathon and ended up building essentially a connector where you can pull blockchain transactions from excel, just for fun, and ended up winning“.

The Bear Market: A Time For Builders

Ganesh eventually founded Covalent based on his winning idea. Unfortunately for him, that coincided with the tail end of the bull run.

The end of 2017 was a rough period for crypto, with $BTC crashing approximately 50% in a few months.

“There was no way to raise funds or anything of that nature. To be frank, there was no gap in the market … and so it was quite a struggle during that first two years, and there were no customers, no revenue, no transactions, nothing at all.”

Despite this, he and fellow co-founder, Levi Aul, doubled down on the company. They took their own funds to bootstrap Covalent, refining the technology and waited out for the bull market.

Since then, Covalent has indexed more than 100 billion transactions over 40 blockchains, with over 30,000 price feeds.

When Investors Stopped Responding, He Put His Down Payment Into Covalent

In February 2020, Covalent received a term sheet for their first funding round.

However, $BTC dropped almost 40% on what has come to be known as “Black Thursday”.

“The investors stopped responding … everyone thought the world was finished“

Having bootstrapped the company using personal funds and with another bear market looming, he doubled down on Covalent once again.

While he had planned on buying a house, he instead took the down payment and put it into the company, giving it a few months worth of runway.

Having the reserve to operate, he managed to get deals with major companies such as ConsenSys, which allowed him to weather the storm.

“That was a bet I made on myself, my team, and my co-founder and the conviction we had in the space which could have gone the opposite way – then I would have been ashamed of my wife and had to tell her I lost the down payment“

4000 Projects: Still A Drop In The Bucket

Did you know that the next Samsung Televisions will leverage Covalent’s technology?

Covalent’s APIs power a myriad of systems within Web3.0, including Ledger devices, Defillama, and even Coingecko.

Furthermore, use cases such as DAO Tooling and Wallet-to-Wallet messaging have yet to be explored.

With infrastructure made for developers, Covalent has been the leader for APIs in every major trend.

Ganesh also notes “we have yet to see the GameFi explosion, [with] the number of double A and triple A studios coming to market is pretty impressive“, with Covalent likely an imperative tool to the industry.

Citing the User Experience issues with GameFi, he highlights that crypto adoption could drastically rise if “Web2.0 companies start to integrate these Web3.0 technologies” rather than the other way round.

“Right now, most use cases of crypto is just taking a traditional finance application and decentralizing it“

How A Mt. Everest Expedition Helped Him Focus On Covalent

Most successful start-ups achieve product-market fit in a few months.

As a serial entrepreneur, Ganesh found it worrying that Covalent had not achieved that, and became disillusioned with his own company.

“Some of my mentors told me to take some time off, so I took some time off to do Everest … and a lot of things went wrong on that trip“

But once he started the hike, a light bulb went off.

“I don’t know if something mentally changed in me or it was the lack of oxygen, but I had existential questions coming up in my mind“

Fortunately for him, the experience gave him motivation to work “8-10 hours, everyday, 7 days a week” for the next few months.

This led to a flow of ideation, which helped him close many early stage projects.

“I would highly recommend doing a big trek like this, it really pushes and it really tests yourself, it tests your commitment“

What’s Next For Covalent?

That quote rings true for both Ganesh and Covalent.

Ganesh has become a very active angel investor, with more than 40 companies under his portfolio.

As for Covalent, they actively host 5 hackathons a month for developers. As their main route through the businesses, he notes that “You can see the next million dollar companies coming from these hackathons“.

With their status as a public good and the positive impact they have on Web3.0, it is safe to say that Covalent will be here for the long term.

You can watch the full interview HERE.