Is GameFi Dead? What It Takes To Unlock The Next Wave Of Adoption 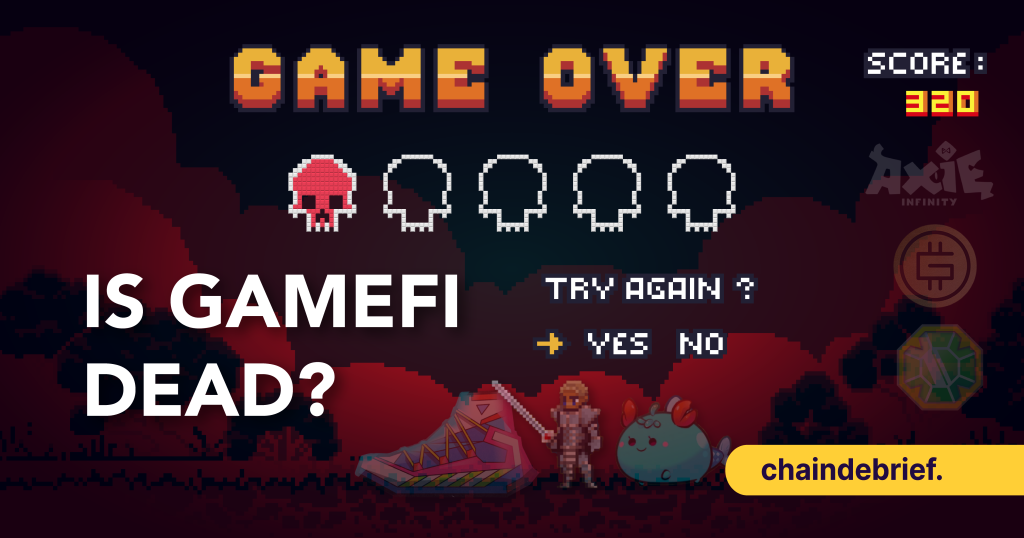 GameFi has been heralded as a critical player in driving wider crypto adoption, accounting for over half of all blockchain activity in the first quarter of 2022. Its unique blend of online gaming and digital finance services was attractive to a broad contingent of users.

Despite its initial burst of popularity, commentators are already heralding its demise, as active players of top Ethereum games have dropped by around 96% from their peak in November 2021.

Yet it’s too early to call it the end. GameFi is still in its infancy. While we are seeing its first dip, this is paving the way for its next iteration. To evolve into a more sustainable vehicle to drive crypto adoption and utility, there are three key weaknesses that GameFi must address: earning mechanisms, distribution mediums and content.

GameFi first surged in popularity as it offered an easy and accessible way for a diverse range of people to easily enter the crypto space.

However, the play-to-earn (P2E) model is inherently flawed. Games aren’t meant to be a primary source of income for the majority of the player base – they are designed to be fun, and built by programmers who have a passion for the game, not its profits. This kind of earn mechanic can attract players who aren’t actually passionate about the game.

Also Read: A 27-year-old left his Goldman Sachs job and became a crypto capitalist in the play-to-earn video game world

One of the key accelerants of GameFi has been systems of ‘guilds’ that bring together a community, enabling them to leverage their collective power and knowledge to drive adoption. However, this can incentivise a player base that is extractive, and looking to generate income or yield through playing games.

This isn’t the ideal audience: traditionally the best audience is the passionate players. These hardcore gamers are willing to spend both time and money on the game and build loyal relationships within certain gaming ecosystems.

While the community is an important component of the GameFi ecosystem, the current mechanisms of whitelisting NFT sales tend to disproportionately reward ‘grinders’ who are able to spend a lot of time in community events or platforms like Discord. Unless the game is already established, a high proportion of minters selected in the whitelist process have invested this time in order to sell the NFT for financial returns, rather than using it in the game ecosystem.

The most valuable player in the ecosystem is more elusive: the time-poor, wealthy young professional who has been playing first-person shooter (FPS) games with friends online for years, is willing to drop hundreds of dollars on skins, and who still remains on web2 channels.

Traditional marketing channels, where targeting can be optimised, are still the best way to reach gamers (eg. advertising FPS GameFi games to people who watch FPS streams on Twitch). With engaging and streamable games, e-sports is also a great community engagement and retention strategy for this player segment that has not yet been possible to be utilised in GameFi.

With a (re)introduction of enthusiasm and investment in the next GameFi wave, GameFi creators will have more capacity to innovate and iterate on their distribution strategies.

As utility and P2E took priority in the upswing of GameFi adoption, the first principles of fun games were somewhat cast aside. Games are an unpredictable and hits-driven business, as consistently creating quality content is more an art than a science

A good game is emotionally engaging. To create that engagement, it has to contain some (not necessarily all) of the following elements:

Building emotional engagement isn’t quick or easy, but serves to deepen the connections a player feels to the game, and encourages loyalty.

Game mechanics have also fallen to the wayside as GameFi creators focus on adoption. P2E games tend to prioritise simpler experiences that require less development, yet this simplicity can make it difficult to build spending opportunities, making it difficult for creators to turn a profit.

The over simplicity is also what has put off many serious gamers from the P2E space and garnered much criticism from this group about the space. Many such players have a high bar for quality before they are willing to spend time playing a game.

While a more complicated game takes longer to develop, it can pave a more sustainable path to build loyalty, generate revenue and raise the bar for the GameFi ecosystem.

GameFi remains the most compelling on-ramp to drive mass-market crypto adoption. Good products are a function of the people behind them and as more experienced game developers and designers take the leap into web3, we will see a resurgence of GameFi with products that look vastly different from the first iteration.

This Article is written by Chris Sirise is a Partner at Saison Capital, which has experience with tokenomics, fintech and media to help like-minded founders transition from web2 to 3.

Also Read: Why Do Gamers Hate NFTs? Are NFTs Out To Extort Gamers Or Liberate Them?