Juno: The Layer 1 Solution Building An Interoperable Future In The Cosmos Ecosystem 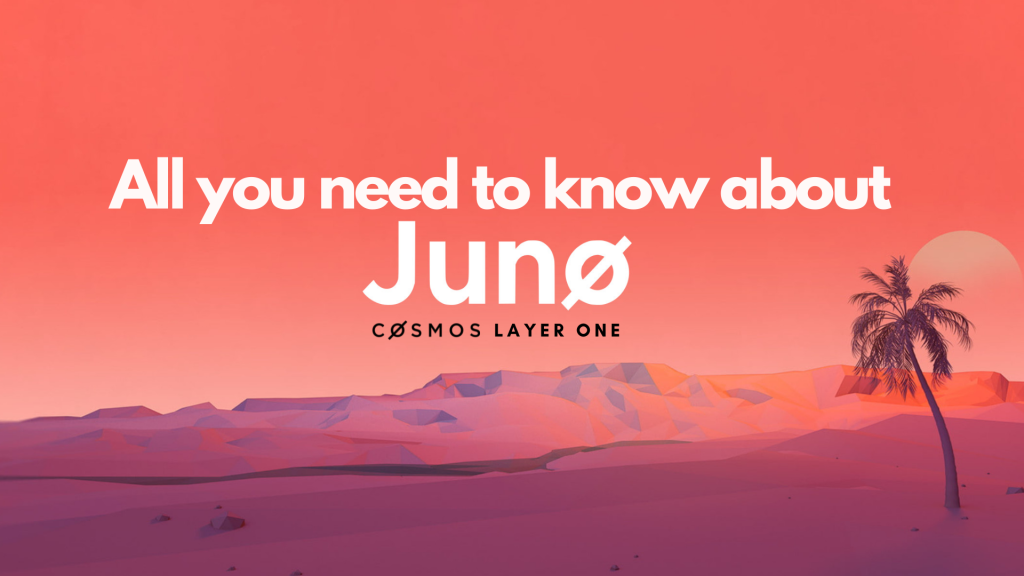 Juno is a sovereign public blockchain in the Cosmos ecosystem, which provides an environment for the deployment of interoperable smart contracts.

The network serves as a decentralized, permissionless and censorship-resistant avenue for developers to efficiently and securely launch smart contracts using proven frameworks, and compile them in various languages Rust & Go.

Battle tested contract modules such as CosmWasm, allow for decentralized applications (dapps) to be compiled on robust and secure multi-chain smart contracts.

CosmWasm enables smart contracts on the Cosmos SDK. This provides a safe, highly performant runtime for your contracts, and the ease of using mature tooling and test frameworks in well-established languages with large developer communities.

(Read More: Why I Am Investing In Cosmos In 2022, And Why An “ATOMic” Explosion Is Incoming)

Its token distribution is entirely fair without any private or seed investors/public sale. The token was given out via airdrops specifically via ATOM stakers.

It is a community run project which is truly decentralized, and has a DAO at the core of its network.

What is amazing about building on Cosmos’s SDK is how Juno utilizes IBC (Inter-blockchain). The graphic below shows 33 active chains using IBC on Cosmos to communicate with each other and Juno occupying 10% of the entire IBC traffic.

(IBC – Inter blockchain Communication (IBC) is a communicative protocol for one blockchain to communicate with another. Cosmos fixes the issue on interoperability to allow various blockchain economies to be able to transfer assets between one another.)

(Also Read: Polkadot vs. Cosmos: Who’s Winning The Race Towards The Multi-Chain Future?)

Juno is a community driven initiative — a ‘sister hub’ to in the Cosmos community, and was built to preserve the neutrality of the hub by offloading smart contract usage and congestion to a designated contract zone.

One of Juno’s core differences is that it is permission-less and censorship-resistant. Traditionally, when developers upload their dApps onto a network, they would have to get them approved by the validators. Only then, they are able to get their dApps onto the ecosystem.

Juno skips all of that — any developer can create any sort of dApp and put it up on the Juno Network. Developers need not wait for any approval to be part of the node. This may open up new projects which would not be delayed in the process.

However this might also come as a double-edged sword. The permission-less mechanic allows seamless and onboarding of dApps, might it may also dilute the quality of applications on its blockchain.

Also, it could be good for the ecosystem if there is a layer of security to allow validators and nodes to check and vet the different projects.

$JUNO is the native token of the network and carries use cases such as:

The Juno Network distributes a fixed amount of JUNO per block based on the rate of inflation and network block time.

There are currently 47 apps and contracts built on Juno. These include the native AMM DEX — Junoswap, DAO creator — DAODAO and an upcoming play to earn game — Strange Clan.

The native DEX of Juno, Junoswaps acts as a decentralized exchange for users to be able to swap, transfer and participate in liquidity pools.

Tokens you are able to swap and transfer are derived within the Cosmos ecosystem. Notable pairs are $ATOM, $OSMO and $SCRT.

(Read More: Osmosis: A Guide To Staking And Farming On This AMM Protocol For The Cosmos Ecosystem)

With 16 pools with pairs from the Cosmos SDK, Junoswap is still in its Beta stages and yet to launch with the rest of the pairs within the Cosmos ecosystem.

DAOAO is built on the Juno Network for users to be able to build and deploy IBC-native interchain DAOs. It has also mentioned about airdrops, crowdfunding tools, and the possibility of DAO games they are developing in the coming months.

Strange Clan is an adventure game with quests, social activities and competitive battles through farming and crafting of NFT goods and tokens.

It is built on Unreal Engine 4 which is the world’s most advance real time 3D creation tool for photorealistic visuals.

Staking is the process of locking up a digital asset non custodially to provide economic security to a public blockchain.

JUNO tokens have to be transferred to a Keplr wallet, staked on Omniflix and delegated to a validator.

When staking is complete, rewards will be generated immediately on a block-by-block basis, and stakers can claim their accumulated rewards at any time, via any supported wallet.

Due to its huge inflation in the beginning, JUNO stakers are currently receiving ~100% APR. Stakers will also have a chance to receive airdrops for new projects building on the Juno ecosystem.

In my opinion, once applications on the Juno ecosystems starts to roll out in full developmental swing, be expected to see a surge in price action of the token as the demand for the Juno token rises.

Compared to the other layer 1s, Juno is an underdog and the most undervalued, providing a stronger potential for an upside. I might even have to shift some of my ATOM bags into the Juno Network.

Read More: An Introduction To The Cosmos Ecosystem And Its ATOM Token