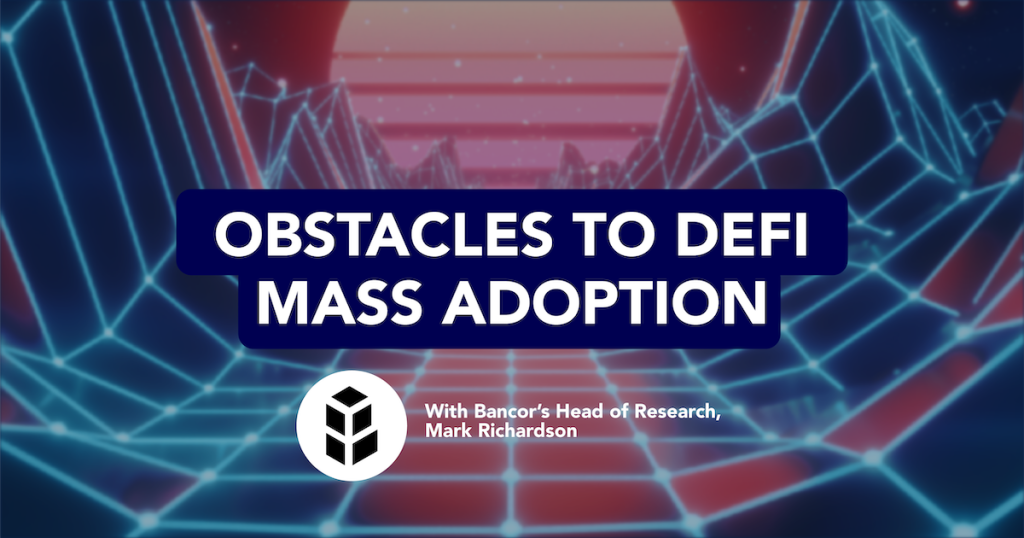 Avalanche Summit is a conference happening from 22-27 March 2022 for developers, researchers, and makers building on Avalanche.

The latest Avalanche platform updates will be shared during the event and developers have the chance to meet like-minded innovators creating next-generation applications for Web3.

DeFi is highly discussed in today’s world and it is no surprise we see obstacles in the way of mass DeFi adoption.

The speaker for this particular event was Mark Richardson, Head Of Research for Bancor.

In the early part of 2020, Mark was just developing the first strips of antigen test for Covid-19.

Although blockchain is different compared to what he studied, Mark is adamant that he is able to contribute deeply to the DeFi space, saying: “after discovering blockchain technology, it was immediately apparent that my skillset would be of the greatest use in service of DeFi.”

In his keynote session, Mark goes through what he views are the stumbling blocks for DeFi to grow and how he and Bancor is tampering them.

Bancor is built on Ethereum and is the first decentralized trading protocol, empowering traders, liquidity providers and developers to participate in an open financial marketplace with no barriers to entry.

No permission is required to use the open-source Bancor Protocol.

The first issue that Mark pointed was how protocols expect to be of utility to the general cryptocurrency audience, while at the same time throwing out an arduous mathematical equation.

According to Mark, the image above was an actual how-to guide from a product on the Ethereum blockchain, and he thus questioned whether “this is the recipe for mass adoption”.

An example of an overcomplicated protocol is the ve(3,3) model where in simple terms, everyone will win together when participating. The win-win model was first introduced by Olympus DAO.

The model requires users to lock their tokens which gives them voting rights, and in turn they receive veNFTs which can then be traded on the secondary market. One needs to understand the technical jargons in order to fully maximise the ve(3,3) model.

For an individual dabbling into DeFi, this would derail his progression in finding an alternative to TradFi. With more people being confused and unsure, this will hinder mass adoption over time.

2) The naive are getting less information than the educated

The second point that Mark mentioned was that a protocol becomes predatory if the naive are getting less information than the educated.

The above chart shows “What does my DeFi protocol do” on the Y-Axis and “Who is going to use it” on the X-Axis.

In this case, the educated are simply cannibalising the naive as the system distributes value from the low IQ individuals to the high IQ individuals. This will in turn cause amateurs to constantly lose out and lead to diminishing inflow of funds.

According to Mark, a protocol should incentivise all users equally — it doesn’t matter how educated or how well researched you are, interacting with the protocol should be as beneficial to you as to anyone else.

There is no need to prey on others or the less informed to make a profit.

How does Bancor solve these problem?

Bancor is releasing Version 3 in three different phases and the Bancor V3 Phase 1 Governance Proposal is already out.

Some of the upcoming major changes are set out to tackle the issues mentioned and make DeFi simple for all users alike.

Impermanent loss is a financial downside risk. If the user is able to solve the previously mentioned equation, he may be able to hedge his gains and come out on top.

But the issue is majority of us are not interested or even capable of solving the equation.

This is where Mark introduced Bancor v3 that “guarantees you do not have any downside exposure and the protocol ensures you against that problem” and he also mentioned that “you cannot lose money, it’s an up-only sort of protocol”.

Omnipool simplifies the process of earning yield on your BNT. There is no need to move your BNT between different pools in order to capture the highest rewards and fees anymore.

All trades can now occur in a single transaction unlike previously, trades are done in a double hop fashion where it requires transfers via BNT before getting the token of your choice.

Easy does it indeed!

Gone are the days where users have to manually re-add their rewards to the pool which cost them gas fees each time because Bancor v3 helps you compound your fees and liquidity mining rewards with no user action required.

Watch your stack grow without learning about the complications of the how-to.

In Bancor v3, third-party protocols can now also offer rewards on their pools, so depositors can benefit from dual-sided rewards, earning more BNT and more of the token they staked.

This keep things simple for a beginner as he does not have to go through the process of claiming rewards and swapping the rewards to the token of his choice. It is now simply, stake and earn.

While some of these solutions are not entirely new concepts, it is interesting to see Mark and Bancor’s approach in tackling “Obstacles to DeFi adoption”.

It is true that there are sophisticated protocols out there which you can reap huge rewards from should you know how to maximise the information provided.

These will generally trickle the flow of funds from the less educated to the more educated which I personally feel is logical as it eliminates free riders.

However, what we are trying to achieve here is mass adoption in the DeFi space. If users have to constantly dig for new data, only the more informed will earn decent yield and stay in the game. This, in my opinion, translates back to a mini Ponzi scheme.

With the new features, it is truly “set and forget”. This is akin to leaving money in your bank, but at much better rates and no one organisation who owns it all.

Furthermore, you do not have to worry about impermanent loss and downside risk (albeit a big claim from Mark, would love to see how that works out).

This undoubtedly sounds remarkable and pave the way for newbies to come into the DeFi space. The future of DeFi seems exciting and lucrative. Who knows, it may even surpass TradFi one day.