SBF Wrote A Pre Mortem About The Entire FTX Saga; We Find Out What He Said 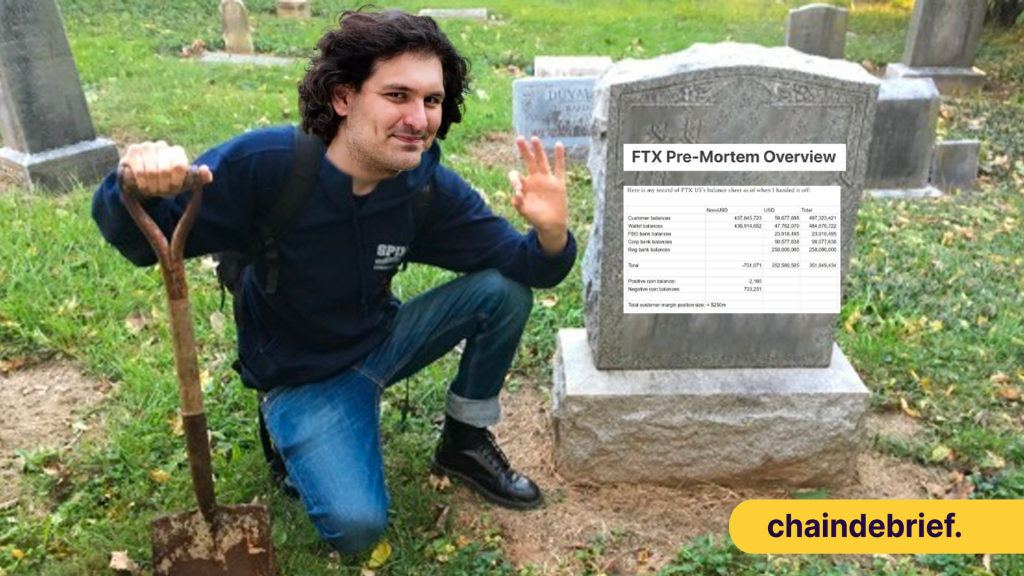 Fast forward to November 2022, FTX International became insolvent due to a combination of factors, including an overgrown balance sheet, inadequate hedging, and an extreme crash triggered by the CEO of Binance.

FTX International’s insolvency ripple effect on other companies is similar to how the failure of Three Arrows affected Voyager, Genesis, Celsius, BlockFi, Gemini, and others.

Also, read everything that broke crypto in 2022.

There was hope for recovery

However, despite the insolvency, according to SBF, there is still potential for substantial recovery as FTX US is fully solvent and should be able to return all customer funds.

According to the balance sheet SBF handed off, it has $350M net cash, an opportunity to do the FTX US users right.

Despite being insolvent, FTX International still had significant assets, around $8b of assets with varying liquidity, when the Chapter 11 team took it over.

Additionally, multiple potential funding offers, including signed LOIs (letters of intent), post the chapter 11 filing, that totalled over $4b.

SBF believes that if FTX International had been given a few more weeks, it could have used its illiquid assets and equity to raise enough financing to make customers substantially whole. However, he is concerned that those options may have been abandoned since FTX was pressured into filing for Chapter 11.

Even now, the founder believes that if FTX International were to reboot, there is a good chance that customers would be made substantially whole.

SBF was about to give his all, including any assets under his name. “I didn’t steal funds, and I certainly didn’t stash billions away” instead, dedicating nearly all his personal assets to customers.

Going into 2022, Alameda has roughly $100B NAV, $8B net borrow and tens of billions of dollars in liquidity. But just like a 100M hurdle race, getting back on your feet isn’t easy after falling on the first obstacle.

Alameda repeatedly failed to properly hedge its position until mid-summer, resulting in a series of significant market crashes.

These included a 30% crash in BTC, another 30% fall in BTC, a final blow of another 30% drop in BTC, and declining liquidity due to rising interest rates.

Additionally, Luna’s value dropped to zero, 3AC collapsed, the co-CEO of Alameda quit, Voyager failed, BlockFi was close to failing, Celsius failed, Genesis started shutting down, and Alameda’s borrow/lending liquidity decreased from around $20 billion in late 2021 to around $2 billion by late 2022.

Caught in a similar whirlpool, many significant assets such as Bitcoin, Ethereum, Tesla, and Facebook have experienced a decline of more than 60% in the past year. Coinbase and Robinhood have also dropped around 85% from their peaks in the previous year.

Also Read: Solana Is Down 95%, Is The World’s Fastest Blockchain Dead?

When markets went down, so did the value of assets. The assets of Alameda, which included a mix of alternative coins, crypto companies, public stocks, and venture investments, decreased by around 80% over the year, increasing its leverage gradually.

As the markets crashed, liquidity dried up in various markets such as borrow-lending markets, public markets, credit, private equity, venture, and many others. Alameda’s liquidity, which was in the tens of billions at the end of 2021, dropped to single-digit billions by the fall of 2022.

There seems to be a trend in the margin trading business: positions are being blown out. SBF then began to name drop margin platforms in which liquidations happened.

That was some context, which led me to bring up CZ’s tweet, arguably igniting the fall of FTX.

SBF claims there is more than meets the eye with CZ’s tweet; it follows an “effective months-long PR campaign against FTX–and the crash.” The market reaction to his tweet caused a slurry in prices to dump, and it all moved super quickly.

The hedges put in place were sufficiently large, but after the 3AC crash, they finally were. According to SBF, the November crash was an attack on Alameda assets, which fell roughly 50%. “As a result, the larger hedge that Alameda had finally put on that summer didn’t end up helping.  It would have for every previous crash that year–but not for this one.”

To add more wood to the fire, “Alameda became illiquid, FTX International did as well, because Alameda had a margin position open on FTX, and the run on the bank turned that illiquidity into insolvency.“

No funds were stolen; Alameda just lost money to a market crash which was not adequately hedged for.

SBF Closed off his pre-mortem, saying this write-up is only the first, and he has a lot more to say about why Alameda failed to hedge, what happened with FTX US and what led to the chapter 11 process and many more.

Also Read: A 2022 Review Of The Top 5 Coins And What We Can Expect In The Coming Year