Solidex Finance: All You Need To Know About The Yield Optimizer Built On Fantom 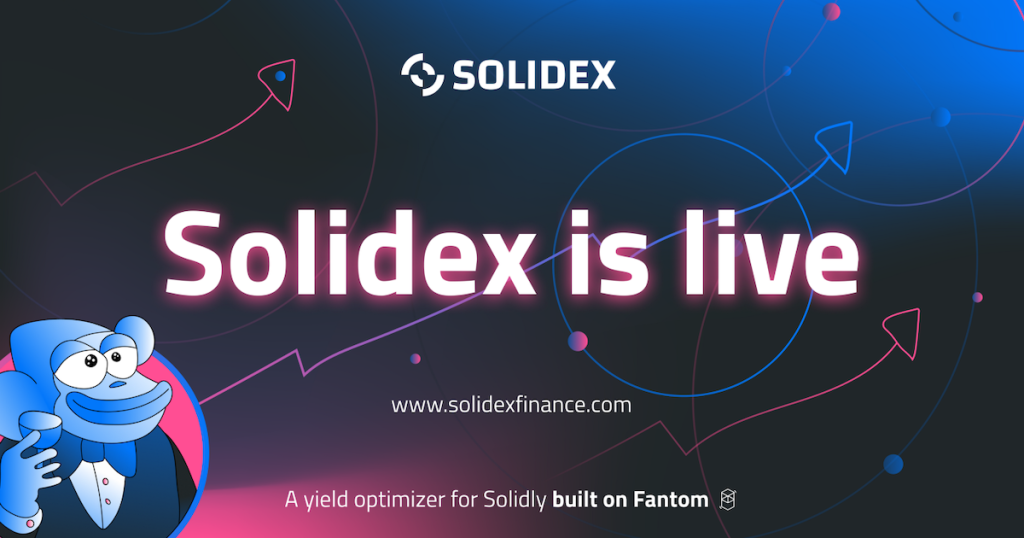 Solidex was launched on 24 February and Solidly emissions have begun. The project has been extensively tested and peer reviewed.

Here’s what you need to know about Solidex:

Solidex is the latest project built to utilize the NFTs from Andre’s latest project and liquidity providers will be able to earn trading fees and claim boosted SOLID without locking SOLID themselves.

Users generally have four options, they can:

Solidly is a Automatic Market Maker based on Uniswap v2. The main benefit is that unlike Uniswap v2, Solidly also provides low slippage trades between pegged assets like stable coins.

A very important fact to tact note of is that veSOLID decays overtime if its not extended. Once the lock expires however, you can withdraw SOLID. When the lock is created, the user will receive trading fees, voting power, and many more utility.

Another important concept is that the ve(3,3) model where locker receive a share of emission based on the circulating supply.

Ve stands for Vote Escrowed which is well known to have its peak in fall 2021 thanks to Olympus DAO, which is a token backed by a treasury of other tokens that attempt to find long-term stability through this mechanism.

In short, users can stake or sell OHM, and if all investors stake OHM, everyone benefits from the astronomical benefit of high yields. The major flag is that is everyone starts selling, this leads to a panic sale where everyone loses, which resulted in the downfall of a well know project, TIME.

In short, investors are caught in the dilemma with the outcomes of ve(3,3) and ve(-3,-3). With this knowledge, Solidly utilizes this ve(3,3) model with a modification.

The main idea is to prevent dilution of existing early lockers, for example, decreasing emissions linearly with a decreasing price. This creates a unique game theory as an increase in locking reduces SOLID given the liquidity providers in a week.

This makes it valuable to participate in locking early and prevents your lock your being diluted by SOLID emissions.

So how does this new Solidly not face the same downfall as TIME? Solidly adds a revolutionary twist of non-dilution protection (which solves the OHM betrayal loop), meaning once you lock your tokens, your share cannot be diluted. This increases buy pressure for farming coins, and creates a new type of ratchet DeFi flywheel.

How do emissions and boosting work?

Solidly mechanisms are quite similar to Curve Finance. In similar context, every week SOLID emissions are distributed started from 20,000,000 a week at a decay of 2% a week. In addition from week 167,  emission further decrease as the total supply eaches 1 billion SOLID.

veSOLID holders will have the power to dictate which pools receive SOLID emissions which is incredibly valuable as it decides which pools will net the most fees for themselves.

Just like curve again, veSOLID holders can also decide to boost their SOLID rewards. Based on the veSOLID owned by a user, they can receive nearly 2.5x more.

How does this apply to Solidex?

Solidex is meant to be a similar use case as to what Convex is to Curve. Built from humble beginnings and designed to harness the capabilities of Solidly, allowing users to receive boosted SOLID rewards without having to maintain their reward.

Partnering with some of the best teams, they commit their voting power to boostrap the protocol.

How does Solidex provide liquidity?

Solidex provides liquidity by bootstrapping liquidity with its SEX partners.

The first 15 projects that deposit their NFT with Solidex during the bootstrapping phase are able to gain liquid tokens (SOLIDsex) that they can distribute to their native token communities, removing the need to fractionalize the NFT into smaller pieces and create illiquid markets.

In addition, they earn a proportional share of the SEX protocol token in addition to SOLIDsex, and earn more frees from the Solid protocol.

Once Solidex launched, SEX partners are allocated SEX tokens based on the total veSOLID deposited during boostraping.

At launch, Solidex Partners will receive an initial SEX allocation immediately available without vesting. While the exact amount is dependent on the amount of SEX partners, it is about three months worth of SEX emission.

Farming in Solidex pools — Users can get insane APR right now on stables, with an APR of 23,000% on stables

It is currently the most popular pool, with over US$200 million in TVL. Users will accrue rewards in SEX and SOLID, and to participate, they will have to purchase the liquidity pool pair.

Users interested in farming other DeFi protocols can also do so, for example, BEETS/fBEETs or BOO/xBOO have pretty decent farming rates.

In addition, users also earn 1 SEX for every 4.2069 SOLID earned. There is however a 15% performance fee on SOLID earned, but not deposit or withdrawal fees.

Users are also able to earn via locking SOLID or SEX. By locking SOLID, users earn 10% of all SOLID farmed by the protocol, earn trading fees, and earn 3.5% of the SEX that gets minted.

Users can also lock SEX, the protocols main token, which currently has quite a few use cases. These include:

Do take note that the APR% is yet to be confirmed as the protocol is still relatively new.

Solidex is a leading protocol to optimize yield, voting power, and liquidity for Solidly. Users that wish to lock SOLID earn a larger share of trading fees and rewards, meaning they gain additional emissions by utilizing Solidex.

Every time SEX is minted, the allocation is as shown below:

Solidex also allows you to maximise your voting power and influence, as it ensure veSOLID is always max locked in order to maximize voting power. This Is controlled via the SEX token which can be locked up to 16 weeks for additional rewards.

In addition, Solidex has 0 withdrawal or deposit fees, and just has a small minimum performance fee distributed to SOLID and SEX lockers solely. There are zero investors, vcs, or advisors.

Solidex is an interesting ecosystem that could certainly prove to be successful if the Fantom ecosystem continues to develop. The fact that many decentralized protocols have decided to surrender their NFT to take part in this project speaks for itself.

As Solidex is still in great development, there is more information that will be released soon.

Also Read: WOO Network: An Introduction To The Next Generation Trading and Liquidity Providing Protocol