Nobody Is Too Big To Fail; The Fall Of Celsius And 3 Arrows Capital 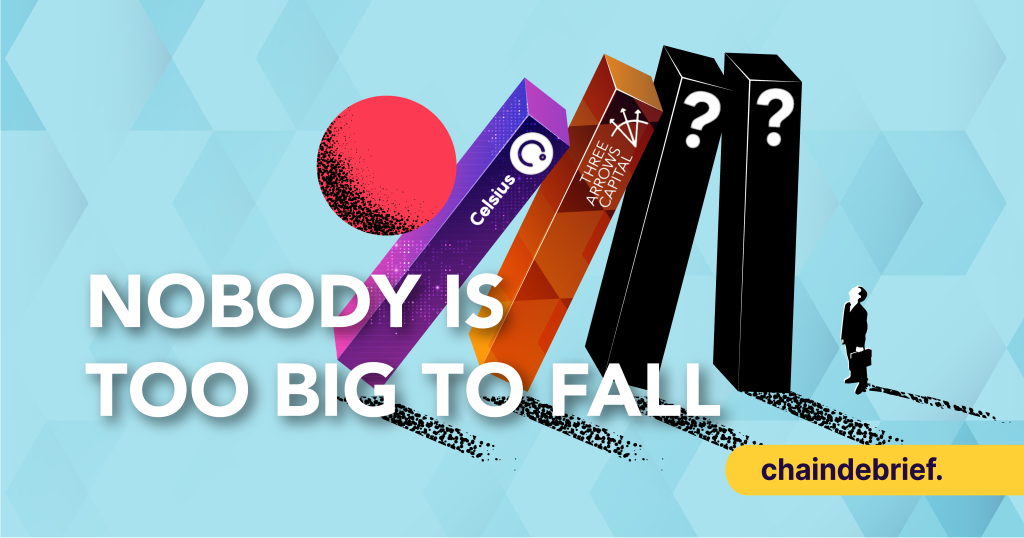 There is never a boring day in the crypto bear market. This week alone we had massive news from a bank run on Celsius, one of the largest centralized lending platforms in crypto. If that was not enough, 3 Arrows Capital, a well-respected and large crypto hedge fund, is also under the risk of insolvency.

So what exactly happened and how are they related? Let’s find out.

Celsius is a retail friendly crypto lending platform and one of the most popular platforms in the market. What they do is simple – they take your deposits, invest it in the crypto market, and participate in decentralized finance (DeFi) to earn yields for the user, while taking a small cut. During the bull run Celsius promised users safe and very high returns.

Founded by Su Zhu and Kyle Davis in 2012, they eventually grew to be one of the largest crypto players in the space, with investments stretching across multiple crypto sectors, from L1s like Avalanche, NEAR, Mina, to Ethereum L2s like Starkware and gaming projects such as Axie Infinity.

Su Zhu himself is quite a prominent figure in crypto, for he was well known in Crypto Twitter circles for being what is called a permabull. He was also one of the main advocates for the ‘supercycle’ thesis, which he discusses at length here:

His tweets are sometimes cryptic, sometimes funny, and sometimes accused as psyops (a.k.a tweets for him to pump and dump on his followers).

Both 3 Arrows and Celsius were big players in the space and enjoyed much successes in 2021’s bull run. But signs had already began to show, starting from the LUNA collapse and fall out.

It is worth noting that both Celsius and 3 Arrows were active investors and users of the Terra protocol. Celsius had invested funds in Anchor for 20% yield.

3 Arrows were also backers of LUNA and alongside other big funds like Jump, had invested close to 1B USD to secure UST’s peg in February.

Needless to say, that did not work out. Today, 3AC’s 10.9 million locked LUNA that was worth $559.6m is now worth less than a thousand dollars.

LUNA’s depeg and fear across the market raised the following questions: what’s next? Are stablecoin or asset pegs even safe?

The fall of this first piece in the domino started a ripple effect, which is simply quite devastating.

How stETH/ETH related to Celsius

For those that are not aware of stETH and ETH, the quick rundown is this:

The stETH/ETH peg controversy was also affecting Celsius, some of which was noted by early wallet investigators and the public.

It is rumoured that Celsius’s attractive yield on ETH was largely due to them providing yield via staking ETH on Lido Finance.

And post LUNA’s collapse and worries on peg, ETH and stETH’s became the natural target of fear and worries of “de-pegging”.

Amidst the downturn of the crypto markets, many investors sought to flee into safer havens. As such, users pulled funds out of Celsius, and we got a classic style bank run.

How? As users withdrew ETH from Celsius, they would have to sell off stETH back to ETH to pay back investors.

Eventually, their liabilities were far more than what their assets held.

It is also worth noting that Celsius THEMSELVES were also leveraged on various places such as MakerDAO and AAVE as well…. in fact, one of their collateral used was, yup, you guessed it, stETH.

A mix of fear, massive withdrawals from their platform, falling prices, risks of liquidations, and a whole lot of FUD in all social channels were the recipe for disaster. Their token, $CEL also plummeted hard due to this event.

Naturally, the domino effects were starting to become obvious and as the next piece of domino falls.

Celsius, in order to prevent the fall out, subsequently suspended withdrawals and froze user assets. To cut the story short, they managed to top up their collateral and pay off some of their debt in order to prevent an even worse death cascade of prices this week.

As of today, Celsius is still surviving, but worries of insolvency and how they will move forward is up in the air.

3 Arrows To The Knee

So what about 3 Arrows (3AC) themselves?

Su Zhu and Kyle, founders of 3AC, were initially very active on Twitter. However, they recently stopped posting any tweets since June 7 and June 9.

Su Zhu had also deleted any mentions of the coins they had invested in on his Twitter bio.

And here is his latest bio:

It is also worth noting that yes, 3AC wallets were also shown to be dumping stETH to ETH, eventually selling it off into other assets to pay off their loans on various DeFi protocols.

Rumours were also starting to spread that a “well known fund” had gone insolvent (Insolvent means the inability to be able to pay their debts owed).

After much rampant speculation going on, Zhu finally stated on recent official tweet, “We are in the process of communicating with relevant parties and fully committed to working this out.”

This finally confirmed the rumors. 3 Arrows had indeed fallen.

A look at OpenSea also showed that the fund has also transferred some of their NFT collection, acquired under Starry Night Capital, to other wallets.

After their announcement, another tweet from one of their partners, 8 Block Capital, also revealed that 3 Arrows had gone silent and had refused to answer any of their calls during the fiasco.

This partially caused widespread fear and a dump in the markets, as seen from BTC and ETH approaching ~20k and ~1k on exchanges respectively on the 15th of June.

A large wallet tagged by Nansen as 3 Arrows Capital also had ~200m worth of ETH that was on AAVE, a DeFi lending platform, which was about to be liquidated past a certain price point.

While this wallet was eventually confirmed as NOT 3AC’s, rumors of 3AC going insolvent and an on-chain liquidation hunt for a large fund about to blow up started spreading like wildfire.

Luckily for us, this liquidation eventually did not happen (yet?) and we remain safe… to this day.

In recent times we have started to see the blow-ups happen. Big players like Celsius and 3 Arrows who had billions in assets under management (AUM) have started to fall. Systemic risk is a huge problem in crypto and I believe that nothing is too big to fail.

In fact, even though the wallet that was almost liquidated was not 3AC, it raises the question: how many funds and whales are out there hurting right now?

Are whales and big funds really as smart as you think? Food for thought.

This whole fiasco also raises some key questions in crypto and DeFi as a whole.

Firstly, liquidations and DeFi protocols do work just as expected – a sign of a resilient system that does not require bailouts.

However, should liquidation prices be shown on-chain for everyone to see? It appears that as the market approaches a more PvP environment, sharks will target anyone that bleeds in these waters, no matter who they are or what they have accomplished in the past. Will a better system that is more private be designed eventually?

Secondly, how many users continue to place their funds into centralized ‘DeFi platforms’? Celsius is not DeFi. Any centralized party that offers safe and high returns, especially when on-chain yields are cratering should be a massive red flag.

Feel free to check out the Terms and Conditions regarding your favourite platforms. Questions on whether the CEX “can they pause your withdrawals any time” or “Are they liable for any losses?” are relevant questions to ask yourself before on-ramping your funds.

Not your keys, not your coins. It doesn’t matter how ‘safe’ they are or what some random strangers on a Telegram/Discord group tell you about their product. Make your own risk assessment and think for yourselves.

As always, surviving in the current environment is key, and hopefully this teaches us all a lesson on hubris today.

Also Read: Here’s How Finblox Lets You Keep Your Crypto Safe While Earning Up To 90% APY