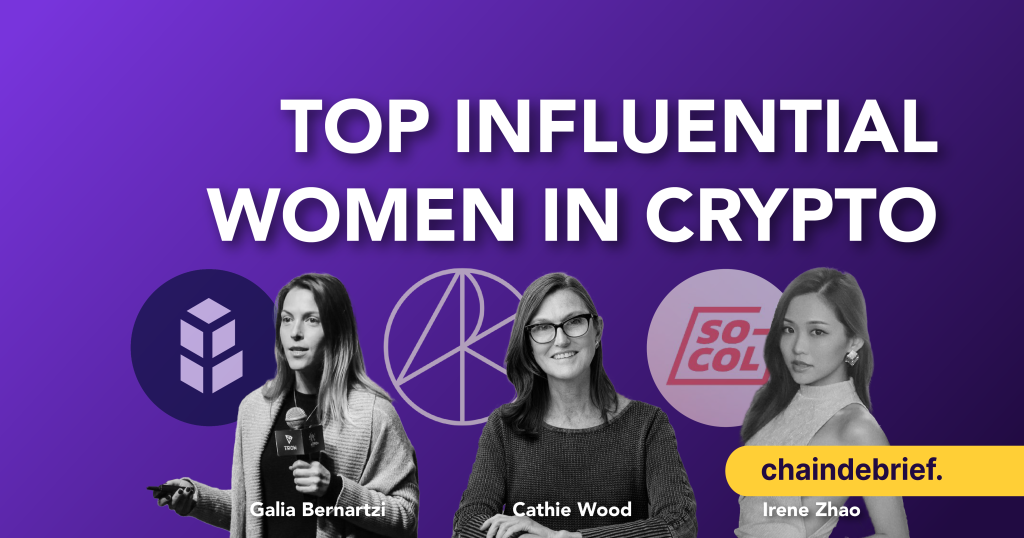 Experts say that women should start taking action to mark on the future of the crypto industry. If not, their absence now may diminish their influence and benefits in the long run.

According to a report, it’s revealed that only 4% to 6% are women working in the blockchain space, which include developers, investors, and casually interested individuals. But the good news is, there are already a number of powerful women who are working to shrink the gender gap in the web3 world.

Here’s how these five iron ladies are transforming the future of the crypto space:

Elizabeth Stark is a blockchain entrepreneur, educator and open-internet advocate. She is the cofounder and CEO of Lightning Labs, a network client that she founded in 2016 where they build layer 2 scalability technology for Bitcoin and other blockchains. She is also a fellow at Coin Center, which is the world’s most influential digital currency policy organization, and an advisor at Chia, a company building a new, easy-to-use blockchain protocol. Stark Is also an active member of the Bitcoin community.

In her early years, Elizabeth has played a significant role in the Internet freedom campaign that resulted in the defeat of Stop Online Piracy Act (SOPA/PIPA), which was supported by 18 million individuals worldwide. Through her career, she has assisted start-ups in a variety of areas, including decentralized technology and artificial intelligence.

Raised in Silicon Valley, Galia Benartzi has been building smart contracts since 2005 after she graduated college. Currently, Benartzi is a technology entrepreneur and co-founder of the Bancor Protocol, a blockchain-based decentralized exchange that allows users to trade cryptocurrency tokens and earn passive income on their cryptocurrency holdings by providing liquidity to the exchange. She is also the CEO, Founder at Particle Code, a cross-platform that develops automation for the porting process for software developers.

Meltem Demirors is one of the inspirations to look out for in the blockchain space. Demirors is the Chief Strategy Officer of CoinShares, a financial services firm in London and New York that focuses on alternative assets, starting with digital currencies. Meltem leads CoinShares’ venture strategy and is an active angel investor, having invested in over 150 companies in the digital currency ecosystem since 2015. Demirors also hosts a weekly podcast on Spotify and the annual Crypto Springs conference in Palm Springs.

Because of her strong passion in the future of finance, she writes about annual crypto trends and helps others to deepen their understanding of the cryptocurrency ecosystem, new blockchain-based business models, and more.

To know more about Demirors, check out her own website here.

Irene Zhao believes that NFTs could be the key to solving this issue. By creating her own NFT collection, Zhao set out to prove that online creators could get paid directly for their content. They would no longer have to push out content for free on social media platforms or rely on their audience reach to get sponsorship deals.

She is also the co-founder of SO-COL, a platform based which provides a new way for fans and creators to collaborate. They are bridging the gap between creators and fans as well as web2 and web3. Supercharging various social channels with NFT technology. Yet, empowering fans make for a more engaged community.

Cathie Wood is the CEO and Chief Investment Officer at ARK Invest. The company focus solely on disruptive innovation and offers investment solutions to investors seeking long-term growth in the public markets. Cathie focuses on thematic investing strategies since 1990, and is passionate about the efficient allocation of capital to its highest and best use.

As Chief Investment Officer and Portfolio Manager, Cathie led the development of ARK’s philosophy and investment approach and has been a long time advocate of Bitcoin and blockchain based innovation. Cathie also ranked as Forbes #53 World’s Most Powerful Woman in 2021.

Caitlin Long is the chairman of WyoHackathon, a celebratory blockchain event for developers, entrepreneurs, and established companies. Long has been an advocate of blockchain and bitcoin since 2012. Before WyoHackathon, she was the co-founder of Wyoming Blockchain Coalition. Back in 2016, Caitlin has won the Women in Finance Award for Excellence in Blockchain 2016 by MarketsMedia, and is actively contributing crypto and blockchain articles in Forbes.

This list is not exhaustive and does not contain all other women out there that has shaped crypto to what it is today. Just like the women you read above who contributed to the crypto space, we need to take necessary steps in building the founding blocks in web3 for a better and brighter future.