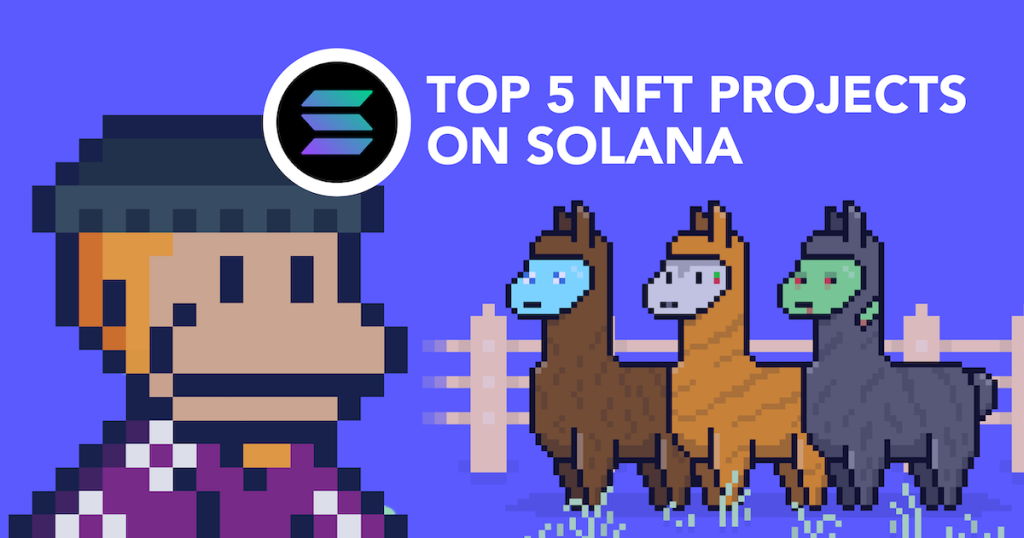 Non-fungible tokens (NFTs) have exploded in popularity in 2021. It has grown to a point that it can no longer be ignored.

From Visa spending US$150,000 on a CryptoPunk to Vignesh Sundaresan, a Singapore-based cryptocurrency investor, splashing US$69.3 million on Beeple’s ‘Everydays: The First 5000 Days’.

NFT sales have grown year after year, from just US$41 million in 2018 to US$2.5 billion in the first half of 2021. It has become a major entry point into mainstream blockchain adoption.

Projects featured are all Solana blue-chip NFTs with high market cap and are listed in no particular order.

Here are the top five NFT plays on Solana:

Degenerate Ape Academy was released in August 2021 and is the number one NFT collection listed on Solanart. The 10,000 apes that were available for mint were sold out in eight minutes.

The project is Solana’s first million-dollar collection. Degen Ape #7225, the 13th rarest in the collection, was purchased by MoonRock Capital for a whopping US$1.1 million.

Currently, a Decentralized Ape Organization Organization (DAOO) is set up where ape owner can make proposals and vote on them.

There are a total of 137 traits with seven different categories. The categories are head, body (clothing), mouth, fur/skin, teeth, eyewear, and background.

The traits are ranked from common (the lowest rank) to mythic (the highest rank). Each rank has a relative percentage chance of being minted.

With more features yet to be released, the Degenerate Ape Academy still has a lot of potential for growth.

Aurory is one the most highly anticipated play-to-earn NFT games on Solana. It is a Japanese RPG that features both PvE and PvP mode where players can use their NFTs to battle.

Aurory uses the same play-to-earn model used by Axie Infinity (AXS). Players battle to earn NFTs and $AURY tokens which can be used to buy items and improve their chances of success in the game.

It is backed by big notable investors from Solana to Alameda Research. The team also onboarded many new members with years of experience in developing AAA games.

Aurory’s successful IDO was the largest IDO on Solana. It raised over US$108 million of funds at a price of US$15.54 per token. The successful IDO helped raise funds for the game development and also showed that there is ample support from the community.

Early access is scheduled to be released this year.

Similar to Degenerate Ape Academy, SolPunks has different attribute that makes them unique. There are three different categories: the SolPunks types, attributes count, and the kind of attributes.

Currently, SolPunks is trading at a floor price of 4.47 SOL (~US$806) on Solanart. It is ranked top three in total volume traded at US$414,300, just behind Aurory and Degenerate Ape Academy.

The value proposition of SolPunks is that nobody minting it would know what SolPunks avatar they are getting until the purchase is complete. The total amount available for minting is capped at 10,000 avatars.

SolPunks put out a disclaimer on its website that “SolPunks is in no way affiliated with Larva Labs and/or CryptoPunks.”

Sollamas are a collection of 8,888 uniquely collectible llamas. Launched on August 2021, the llamas were sold out within minutes of the launch. The Melbourne-based team pocketed over US$2.5 Million from selling the llamas.

The launch of Sollamas did not go smoothly as expected, with some users reporting that they were receiving more llamas than they minted. While some did not receive a llama despite paying 4 SOL to mint it.

The developer decided to airdrop Gen 2 Llamas to those who minted and didn’t get their Llama. They also ran a buy-back program for those who did not want the Gen 2 Llama.

No two llamas will be the same as there are over 165 unique attributes across 17 different categories from backdrops to mouth accessories. Attributes are also ranked from unusual (lowest rank) to artifact (highest rank).

The developers are working on the next generation of Sollamas NFT, and llamas would be able to breed and produce new NFTs.

Ending the list is Solana Monkey Business (SMB), one of the OG projects on Solana. SMB is a collection of 5,000 uniquely generated monkeys.

This gives the NFT value, as SMB holders would be able to earn royalty and also vote on how to distribute the treasury and improve the project.

Solana Monkey #1355 is the rarest NFT in the collection and also the most expensive Solana NFT to date. It was sold at a record-breaking 13027 SOL (~US$2 million).

How to buy NFTs on Solanart

Solanart is the first and largest secondary market for Solana NFTs. It allows users to buy and sell NFTs seamlessly. Solanart supports a range of wallets from Phantom to Solfare.

Users must first connect their wallet to the website to transact. Prices of NFT are all listed in SOL.

After selecting the NFT, users will be presented with two options: “Buy Now” or “Make Offer”. Clicking the “buy” button would allow you to purchase the NFT immediately. After the transaction is confirmed, the NFT will appear in the user’s wallet.

Solana is undoubtedly the biggest threat to Ehereum’s dominance. With a high market cap and cheaper gas fees, Solana is poised to host more promising projects in the near future.

Also Read: Solanart: An Intro To Solana’s Leading NFT Marketplace And How To Get Started