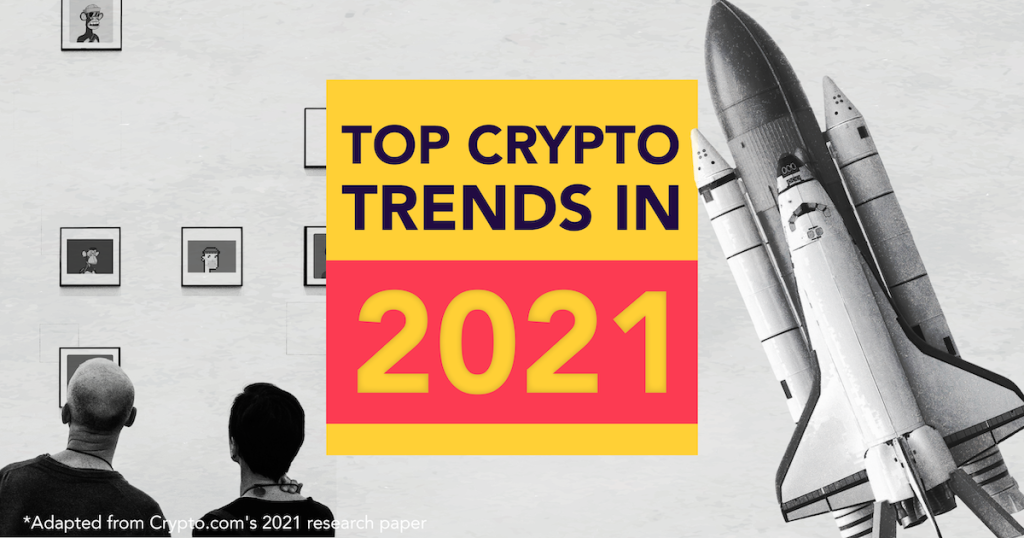 Undoubtedly, 2021 has been a great year for crypto. The cryptocurrency frenzy led to new all-time highs across the board, with Bitcoin hitting US$67,000 and Ethereum hitting US$4,800.

Before we usher in the new year, here is a recap of the big things that happened in 2021, according to a research report released by Crypto.com:

Of cause, we have to start the list with bBillionaire Elon Musk, CEO of SpaceX and Tesla. 2021 was a hell of a ride as cryptocurrencies price spiked or dips depending on Elon’s tweet.

Elon Musk is by far one of the most influential people in the crypto space. We can see a clear correlation between Elon Musk’s tweet and the movement of the crypto market. For instance, earlier this year Bitcoin spiked 14% after Elon added #Bitcoin to his Twitter bio.

On 4 February 2021, Elon Musk tweeted a string of tweets with reference to Dogecoin. It triggered a Dogecoin frenzy that sent the price flying over 50%. This phenomenon is widely known as the Elon effect.

Named the person of the year by Time Magazine, some might say Elon Musk has too much influence over the crypto market.

Prices of goods and services will be shown in Bitcoin and even taxes can be paid using the digital currency. Using digital currency also improves financial inclusion as approximately 70% of El Salvador does not have access to the banking system.

Following El Salvador, more nations would adopt cryptocurrencies as legal tender and it would be a step towards a crypto-inclusive future.

Needless to say, China has a huge impact on the crypto space. As the second-largest economy in the world, any small movement would cause a ripple effect affecting many.

China’s mining crackdown was an event that rocked the world. Previously, China was the go-to location for Bitcoin mining. It contributes more than 50% of the global hash rate. The crackdown forced many miners to relocate to North America and Central Asia.

The crackdown caused Bitcoin price to plunge below US$30,000 from around US$55,000 in early May. Prices started to bounce back while the global hash rate regained its strength.

China also launched its own national digital currency, the Central Bank Digital Currency (CBDC). It is reported that more than 140 Million people had opened a wallet for the digital yuan and US$9.7 Billion transactions were processed as of the end of October.

It is inevitable that the world would move from analogue to digital. China is currently at the forefront of CBDC and it is only a matter of time before other nations release their own digital currency.

Meme coins have been the talk of the town am I right? From the mighty Dogecoin ($DOGE) to its rival Shiba Inu coin ($SHIB).

Meme coins have been hoarding the spotlight with their life-altering gain since the start of the year. At the time of writing, both $DOGE and $SHIB are among the top 20 coins with a market cap of US$23 Million and US$19 Million respectively.

Without a doubt, $SHIB is the meme coin for 2021 as the coin has returned more than 49,000,000% on a year to date basis. This insane return is the main drive for investors to look for the next big meme coins.

We also have to talk about popular South Korean Squid Game inspired cryptocurrency, Squid Coin. Marketed as a play to earn cryptocurrency, the token price soared through the sky and users saw gains by thousands of per cent. The token peaked at a high of just over US$2,800 before plummeting to US$0.

This is known as a classic “rug pull” where the developers quickly cash out their token and effectively make the token worthless. The anonymous scammers made off with a whopping US$3.3 Million and left investors holding a bag of worthless tokens.

While Meme coins minted a number of millionaires in 2021, it is very volatile in nature and investors should only put in money that they are comfortable losing.

Non-Fungible Token or NFT made a splash in 2021, and became one of the hottest buzzwords of the year and it was even named “Word of the Year” by Collins Dictionary.

NFT is beyond just digital artwork. It can represent anything from digital land to music and films. The use cases for NFT is endless. The very concept of NFT addresses the human psychological need for authenticity and ownership.

The NFT market boomed in the latter part of 2021 with a stark increase in both sales and volume. The total sales volume pumped over 7000% since January and was over US$ 12 Billion as of 8 December. The craze is strong and is expected to last beyond 2021.

All in all, NFTs are still in the early phase and is expected to gain wider adoption in the near future.