What Are Soulbound Tokens? Will They Be Web3 Credentials Of The Future? 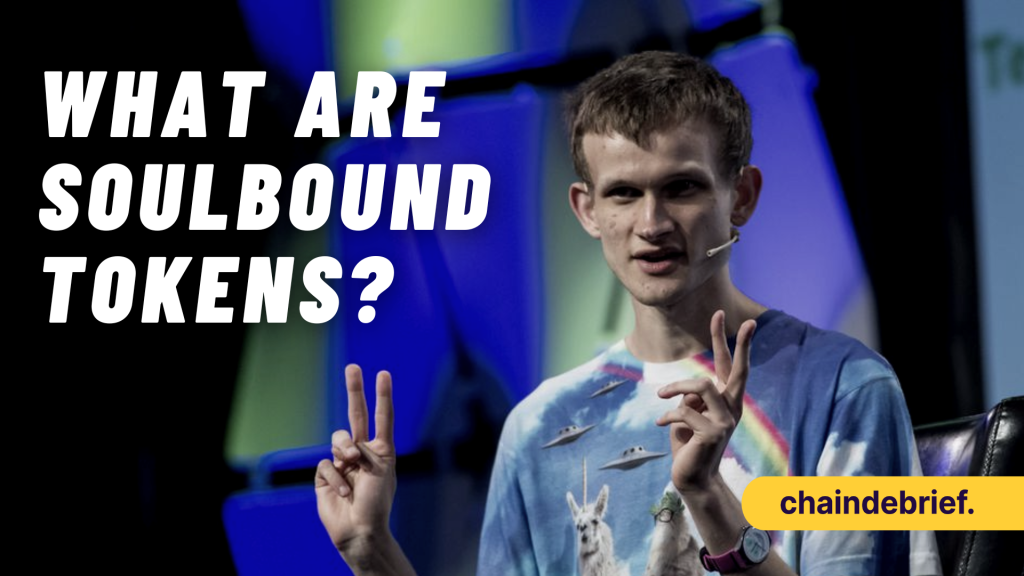 Vitalik Buterin, recently co-published a paper explaining the future of Ethereum and an idea called Soulbound tokens(SBTs). What exactly are these?

Soulbound tokens, or SBTs, are essentially non-fungible tokens (NFTs) with a special purpose. But hold on reader, these aren’t just meme pictures – SBTs could represent a future that could revolutionize DAOs and our social interactions in the future.

Firstly, SBTs cannot be traded and transferred and are tied to a fixed “Soul wallet” forever.

So we have a non-tradeable/transferrable NFT. That might be a mouthful and many would think that goes against the whole purpose of an NFT. So what are the potential use-cases for it?

Firstly, suppose that someone can earn SBTs based on their off-chain credit history. This could be in the form of job records, educational qualifications, certificates etc. Imagine a world of SBTs where all documentation you own is tied to you, this would mean none of these SBTs could be tampered with and falsified.

In other words, SBTs are a tokenized version of someone’s reputation or resume from the external world. The use cases and the implications are what the paper defines as “Decentralized Society”, or DeSoc. Since they are non-tradeable or transferrable, they are fixed to your wallet and more SBTs can be accumulated over time in your wallet.

This could mean something like birth records or educational certificates that users will own, allowing for a digital identity on-chain. Hashes of your own writings, artwork, etc can also be tied to your soul wallet or represented as an SBT.

Since we currently have services like the ENS Domains, this could just be the future development of how blockchain can interface with more real-world applications.

From my perspective, SBTs are basically a form of staking your “reputation” or “trust level”. They are a form of a commodity of trust on-chain.

But wait, you might ask. Since SBTs are tied to one wallet, what happens if you lose your private keys and access to the wallet, hence losing all your SBTs?

The paper actually explains the following:

“Recall that SBTs represent memberships to different communities. Some of these communities—like employers, clubs, colleges, or churches might be more on-chain in nature, while others like participation in protocol governance or a DAO might be more on-chain. In a community recovery model, recovering a Soul’s private keys would require a member from a qualified majority of a (random subset of) Soul’s communities to consent.”

In the community recovery model, a user can have a group of guardians that have access to the private keys. This would likely be institutions or trusted individuals.

SoulBound tokens could tackle certain problems that face DAO governance today. The paper states that, for token protocols today, measuring decentralization by looking at on-chain wallets is inaccurate due to either

Even if these addresses could be tracked to unique entities, these individuals could be socially correlated groups that could end up colluding.

SBTs could tackle such a problem in the future. DAOs could limit voting or set higher requirements to those that are reasonably SBT-rich.

If there are Soul wallets tend to share a large number of SBTs, it indicates that they are highly correlated. SBTs could provide for more diversity, e.g. DAOs optimizing for voting user diversity among zip codes, or those that belong or have participated in another subset of special hobby DAOs.

DAOs could also utilize SBTs for issues such as deciding on airdrops for users. They could in theory,

“deter free-riders by first creating a norm around soul dropping (perhaps vesting SBTs) only to probable
sybil-resistant Souls who delivered liquidity and then withholding souldrops to Souls who shifted their
liquidity in a vampire attack to other protocols.”

The issue of airdrops and solving people that try to ‘game’ airdrops could be tackled with SBTs.

Also Read: Is Ethereum Set For The Next Chapter? Here’s How To Claim Your Optimism Airdrops

SBTs could be a method for institutions or entities to provide instant lines of credit.

Having access to a transparent financial system (in DeFi) sounds neat, but what about those that need the money but lack the collateral to take a loan?

In this case, they would be able to stake their reputation (as SBTs represent their on-chain credit), allowing them to finally access the funds they need without an intermediary. This would also increase DeFi’s use cases and bring about more total value locked over the coming years.

In fact, the loans themselves could be represented as an SBT – non-transferrable but revocable. These loan SBTs could even be “burnt” after the loan is repaid, or even better, replaced by another SBT that signifies “proof of repayment.”

As SBTs cannot be transferred, this means that users cannot transfer or even hide their outstanding loans as it is all on-chain.

Hypothetically, people could game undercollateralized DeFi protocols by taking loans, defaulting, and simply creating a fresh new wallet or a fake identity. With SBTs, however, a fresh “Soul” might lack the necessary SBTs and reputation to take a new loan.

Similar to providing educational certificates on-chain, you could own an SBT that gives you exclusive rights.

How about the right to access an exclusive networking event? Or as a VC, having a solid track record in the form of an SBT allows you to participate in a seed round etc.

Now, imagine a world where protocols get to ‘vet’ early investors prior to their funding round due to the presence of SBTs on-chain. A robust ecosystem of SBTs could set a new stage for how projects are funded in the crypto industry. After all, the system of trust and looking at which funds have a good track record already exists informally – why not represent it transparently on-chain?

This could also easily apply to DAO governance, where owning a specific SBT gives you the right to access or dictate certain actions/voting in the DAO.

These SBTs act as reward badges for participating in the DAO – it could even start from something small, such as acting as the community manager in a DAO’s Discord.

Sure, SBTs could prevent fraud and vectors of attack on governance on DAOs. Similarly, it could be a good solution to unlocking even more use cases in DeFi.

But, I for one do not welcome a dystopian future where SBTs are basically a form of social credit… which is now immutable and on-chain.

Imagine a world where you can freely transfer tokens to others (a permissionless system) but you cannot prevent someone from sending a Soulbound token to you. I’m sure that in certain cases, there would be SBTs that users do not wish to receive.

What if your Soul, was say, tainted by a bad record? What is to prevent bad actors from minting an SBT that they transfer to you? Rather than as a “altruistic” reputation system, there could easily be methods for users to attack others.

What if you were minted a “criminal branded” SBT for a crime that you did not commit? This SBT would not be transferrable and would remain and be tied to your Soul, forever.

While technological advancement is a good thing, perhaps we should be wary of the type of tools we are inventing.

The more that I think about this system, the more I am reminded of the following:

“The road to Hell is paved with good intentions.”

Also Read: Top 5 Crypto Tools That Will Turn You Into An On-Chain Wizard