What Happened To $LUNA? How It Crashed More Than 95% From Its All-Time High 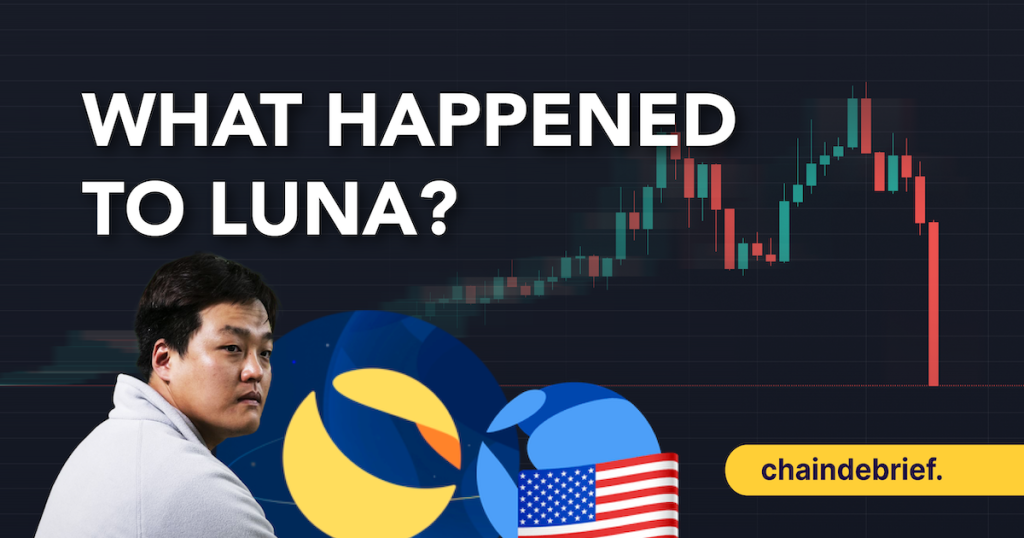 In the last 48 hours, we saw billions in value wiped from the cryptocurrency market. At the center of it was all was Terra’s $LUNA, and its algorithmic stablecoin, $UST. In one of the most disastrous days for crypto, many lost their entire life savings, and others may very well leave the space for good.

With $LUNA price falling more than 90% in a single day and $UST still struggling to repeg, it may be time to reconsider our outlook on just about everything.

Unlike stablecoins such as $USDT and $USDC, $UST is not backed by any physical assets. Instead, it maintains its peg via arbitrage.

The second part of Terra’s plan was introducing a use case for $UST, Anchor Protocol.

Touted as a savings bank, Anchor promises roughly 19% APY on stablecoins. They maintained this by artificially inflating lending rates through the foundation’s reserves.

At its peak, Anchor saw US$17 billion in deposits.

While similar algo-stables have failed in the past, many saw Anchor as a good reason $UST would not collapse. With such high TVL, they would eventually branch out their use cases and become “too big to fail”.

To add to the credibility of $UST, Do Kwon, the CEO of TerraForm Labs, publicly announced a US$10 billion Bitcoin buy. The idea was to diversify the backstop for $UST away from $LUNA while earning support from the wider cryptocurrency community.

Ironically, this may have been the downfall for Terra.

While unconfirmed, there was likely a concentrated attack on Terra. Heavy shorting led to the foundation’s $BTC being worth less, which they had to sell to protect the peg, compounding the effect.

As $UST’s peg became an uncertainty, TVL started to exit Anchor. Burning $UST for $LUNA and selling it on the open market led to the peg falling even further, causing the “death spiral”.

Furthermore, there was heavy leverage in the ecosystem, thanks to subsidized borrowing. Anchor also faced front-end issues, and many were unable to change their Loan-To-Value ratios to avoid liquidation.

The cherry on top was that everything happened on the day that Terra was moving funds in Curve, the top DEX for stablecoins. This meant thin liquidity, one of the worst conditions for a bank run.

All these combined meant one of the worst liquidation cascades in cryptocurrency history.

Terraform Labs is currently scrambling to salvage the situation. While rumors of a bailout were circulating, investor confidence may already be damaged beyond repair.

The current proposal to stabilize peg would accelerate the dilution of holders. At current prices, it also means giving up a large portion of the treasury, stunting future growth. This may still not be enough as the $UST market cap is currently about 10x of $LUNA’s, rendering it insolvent.

An exposé on Do having run a failed algorithmic stablecoin project previously has also emerged.

There are many negative implications of Terra’s failure.

Regulators will be sure to leverage this event, and U.S Treasury Secretary Janet Yellen already called for increased stablecoin legislation by year-end.

Other ecosystems are facing heavy price downtrends due to the heavy Bitcoin selling, parallel use cases, and $UST’s widespread use.

Institutions farming $UST may also have been affected. This may be the most alarming cause for concern and lead to worsening markets. While there is no news yet, a single institution becoming insolvent will cause further fear and panic.

The saddest reality is the billions in retail money lost. While $UST holders may have a glimmer of hope, most borrowers have been liquidated. Some may have lost their life savings or even more than they could afford to. Many will not come back to the space.

The market is quick to humble us. As it turns increasingly bearish, it may be wise to stay risk-off until better conditions arrive.

Also Read: LUNA Falls to a 9-Month Low of US$25: A Summary Of The Crash And UST Depeg