Project Strength: Which Blockchain Has The Highest Developer Count, And Why It Matters 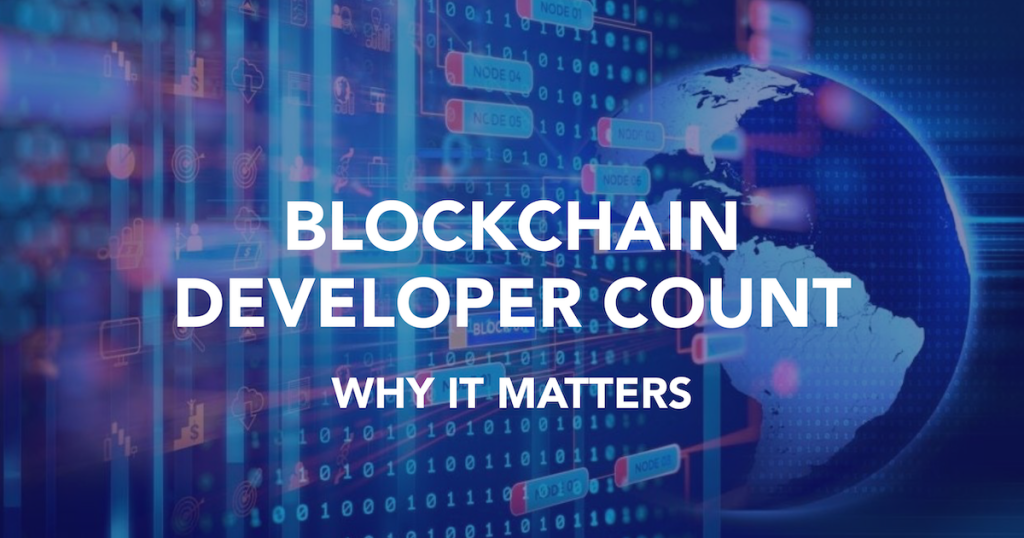 Say you want to invest in crypto and hold for the long-term. How do you decide which blockchain has the strongest growth potential?

Crypto analysts commonly use the total value locked (TVL) metric, which tracks how much capital is locked up in a project’s smart contracts.

Despite its widespread use however, TVL is highly imperfect. Given the speed at which projects emerge and collapse in DeFi, TVL becomes an unreliable proxy for the long-term success of a chain.

TVL becomes even more misleading when the use of liquidity mining incentives is widespread on every project, leading to the phenomenon of “mercenary liquidity” where capital flight occurs once incentives run out (for more on the problems of TVL, see here).

Fundamental metrics at minimum, should hold true beyond the short-term future.

One lesser-known metric to measure project strength has been to look at the number of developers flocking to the project.

While TVL gives us an indication about the number of users investing into the blockchain project, looking at developer contributions tells us something about the builders and brains behind the project. In short, TVL tells us about demand, while developer headcount tells us about supply.

If blockchain A had 10,000 more active developers in 2021 than blockchain B, you can be confident that big things are coming for blockchain A, even if its token price is currently low.

Because of the open-source nature of blockchains, code contributions and developer activity are publicly accessible. Thankfully, we don’t have to scrub a thousand pages of Github ourselves.

A recently published report by Electric Capital analyzed up to 500,000 unique code repositories (excluding copy pasting of code) and 160 million code commits across Web3 to study which blockchain had the highest number of active developer engagement.

Here are some of its significant findings:

The stiff competition between Layer-1 platforms means that blockchain companies need to compete not only for users but also for developers.

It’s no surprise that Ethereum leads the race on total developers, with a total of 2,980 developers in 2020, and 3,920 in 2021. Ethereum also attracts the largest percentage of all developers entering Web3.

Polkadot’s lead is largely due to its use of Substrate (built on the Rust programming language), which gives developers the advantage of speed to quickly build a customized blockchain for their own specific use-case without having to set up their validator network.

Upgrading chains on Polkadot is also much faster due to its backward compatibility that does not require developers to fork.

Now that we’ve compared absolute sizes, let’s talk about which chain has the fastest growth.

Among medium-sized ecosystems with 300-1000 developers, the highest developer growth belonged to Solana at a significant growth of 5x, while Near saw a 4x growth, a sign of promising things to come for both these chains.

Despite its burst in market capitalization in 2021, Binance Smart Chain saw a slightly lower growth of developers.

Bitcoin’s lower growth however, comes without surprise due to its lack of smart contract capabilities and longtime presence.

These findings are affirmed in a recent Messari Research Article, which finds the highest growth in the same ecosystems.

How about smaller chains in the category of 51-300 developers? Terra takes the lead with a 4x growth of developers, followed by Internet Computer, Fantom, Harmony, Avalanche, Algorand, Chainlink, Hedera and Moonriver in respective order.

Terra’s exponential 2021 growth in market cap and TVL despite its lower developer headcount suggests that Terra is achieving “more with less”. Incoming Terra developers are likely to continue increasing in 2022.

Note that this comparison may not be ideal since smaller up and coming chains are going to see a higher rate of growth until diminishing effects kick in.

Interestingly, despite Ethereum’s dominant presence in the smart contract Layer-1 wars, competitor chains have managed to latch on to its successes by introducing EVM compatibility and allowing Ethereum dapp developers to easily port their projects away.

This suggests that chains with the lack of EVM compatibility (such as Singapore-based Zilliqa) might serve as a setback.

How is Web3 doing as a whole? 2021 saw the largest growth of new developers at 34,391, recording its highest in history.

Increase in active developers tend to be correlated to a price increase of the network. This can mean that a growth in developers causes a higher network value in the future but it can also suggest that a valuable network attracts developers down the road. Correlation is not causation.

Note that much of these numbers undercount actual developer activity since it only includes open-source projects.

In summary, Ethereum, Polkadot, Cosmos and Solana emerge as the platforms with highest developers, a good sign of things to come for its DeFi ecosystems in 2022.

Also Read: Polkadot vs. Cosmos: Who’s Winning The Race Towards The Multi-Chain Future?