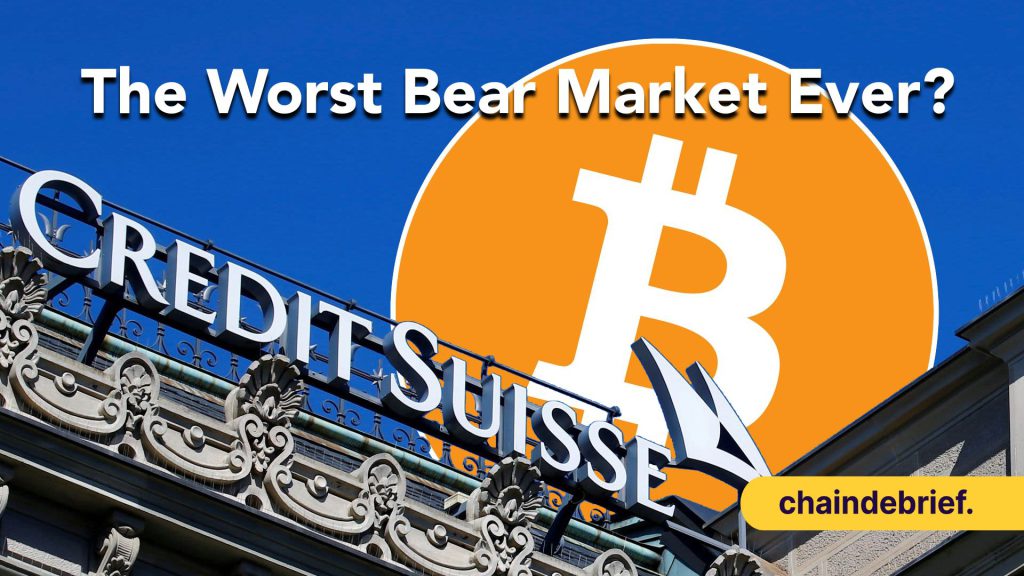 Founded in 1856, Credit Suisse has established itself as one of the most successful investment banks in the world. However, many investors and stakeholders have become wary of the considerable financial stress it is currently facing.

Due to a series of bad investments and poor risk management, rumors have been circulating about a possible “Lehman-style” collapse, which led to the 2008 Financial Crisis.

Since July, CEO Ulrich Koerner has been trying to restore the bank’s reputation and profitability, but his efforts have not managed to sufficiently reassure investors,

With a possible bank default on the horizon, a deeper analysis on how this can affect both crypto, and the wider economy, has to be considered.

Also Read: Are Regulators Crypto’s Biggest Challenge Or Could They Actually Help With Web3 Adoption?

Will Credit Suisse Be The Second Lehman Brothers?

To analyze the situation further, we need to dive deeper into Credit Default Swaps (CDS).

CDS premiums for Credit Suisse are a good indicator of what the market assumes will happen, as high premiums generally mean a higher probability of default.

Currently, the premiums are even higher than back in 2008 – when the world thought the global banking system would collapse.

Credit Suisse options are also pricing in an explosive equity movement over the next 3 months, with an implied volume of 61.

I know it’s not easy to remain focused amid the many stories you read in the media — in particular, given the many factually inaccurate statements being made. That said, I trust that you are not confusing our day-to-day stock price performance with the strong capital base and liquidity position of the bank.”

The Switzerland-based bank’s CEO has since come public to quell fears of a default, but his statement seems to have backfired.

It has come across eerily similar to a statement from Lehman Brothers, right before they went bankrupt.

While Credit Suisse has been around for more than a hundred years, a recent slew of bad risk management has led to its current state.

The Greensil Capital bankruptcy was a well-known debacle. The largest non-bank provider of supply chain finance at the time, Greensil Capital eventually went bankrupt, leaving $10bn in investments, including Credit Suisse’s, with nothing to show for.

Another was Archegos Capital, founded by the infamous Bill Hwang, which was financed in part by Credit Suisse, and eventually went bankrupt.

Credit Suisse has also had to deal with regulatory issues across multiple regions – including Switzerland, the United States, and the United Kingdom.

Facing The Facts: Is Credit Suisse At Risk of Defaulting?

As CDS are difficult to extrapolate, we can use bonds to paint a similar picture. Bonds are generally viewed as risk-off assets, and their price volatility reflects the trust holders have in the issuing body.

A less attractive bond may also have to be issued with higher yield, to offset the risk holders take in purchasing them.

2025 Credit Suisse bonds are currently giving out 6.4% yield. For reference, US 3Y bonds are being issued with approximately 4% yield, and Temasek 5Y bonds have 2.70% yield.

Credit Suisse also raised $1.5 billion through bonds this summer at an offering of 9.75%. Since having their bonds downgraded through several reputable credit agencies, however, yields are currently at 12.5%.

Credit Suisse has a CET1 ratio of 13.5% which is extremely high as compared to its peers.

CET1 is a measure of a bank’s solvency and capital strength,

For context, this is well within the banks own target and about the international requirement of 8%. In 2008, it was common to see sub 5% CET1 ratios.

Credit Suisse also has the best LCR ratio (191%) meaning it should never have any liquidity concerns in the short term.

LCR, or Liquidity Coverage Ratio, refers to the proportion of highly liquid assets held by financial institutions available to meet their short-term requirements.

Credit Suisse would need to burn through $44.2 billion in capital before anything would even happen to its customers.

UBS faced a similar situation during the Financial Crisis and got bailed out, and this is certainly not Credit Suisse today.

Rather than liquidity concerns, we may see the current move as an inconvenience for funding costs and for private banking, since there is a risk of outflows due to negative media headlines.

It is essential that executives inform the general public and investors that they are going to do a restricting at Credit Suisse, especially with falling share price and the soaring cost of insuring debt.

This is because of the emerging country China, where Credit Suisse saw a huge growth in Chinese clients and particularly in the Asia market as well.

Asian clients also did nearly 3x the volume as compared to Americans, leading to a bigger focus on Chinese clients.

Also Read: Shanghai Government Steps Into The Metaverse With A $52B Goal By 2025

Of course, the nice growth in profitability in Q2 was easily eaten up by the Lev Fin group due to horrible decisions in the derivates market leading to a $245 million blowup, leaving markets down by nearly 96%.

Furthermore, as mentioned by Alex Good, its worth pointing out that the equities group (from Prime Services) blew up Credit Suisse to the tune of $5.5 billion which is nearly half of the bank’s market cap servicing Bill Hwang.

In order to eat these losses, Credit Suisse will look to separate losses and let investors bid for this, likely at a steep discount.

Quite obviously, Credit Suisse has had a sleezy past with many cultural issues. Not to even mention legal problems of $1 billion in Q1 2022.

The war would also have a significant impact which would cause increased scrutiny to Credit Suisse’s operations. Furthermore, its important to note that with the recession Credit Suisse now has incredibly high exposure to Chinese Clients.

Due to collapsing inflows, the Chinese Government would want to crackdown on outflows to banks like Credit Suisse, and utilizing them isn’t quite a great idea, since this could anger both the Chinese and US regulators with an extremely sensitive Q3 time period of Xi’s 3rd term.

We could see further outflows from the private banking business given this situation.

Regulators have been watching and monitoring Credit Suisse, but looking at their capital and liquidity, it is highly unlikely we will see a similar situation to the 2008 Financial Crisis.

Sources at rival Wall Street firms have also affirmed this view with Credit Suisse able to absorb the upcoming losses.

The more important thing is that investors are way too jumpy and are causing widespread panic despite the healthy ratios.

What would happen if Credit Suisse Defaults?

If a bank defaults, it may try to borrow money from other solvent banks in order to pay its depositors.

This is known as a bank failure which occurs when a bank is unable to meet its obligations to its depositors or other creditors due to its insolvency.

Furthermore, if it cannot pay its depositors, a bank panic may occur where customers may look to do a bank run, further shrinking its liquid assets.

This is why when a bank fails, the FDIC will likely find another bank to take over (known as a bridge bank) so that customers will be able to continue using their accounts, debit cards, and banking tools.

But this is not without repercussions. Often, the FDIC may be too late to control the situation, with too many liabilities and too little assets. This would mean there would be no way to retrieve back their money.

In terms of macro aspects, this creates something very similar to what we saw with 3AC. Many companies and individuals will lose vast sums of investments to Credit Suisse, from which they may have borrowed money as well, resulting in them defaulting on their loans.

This would create a domino effect that would cause any bank or individual with too much exposure to Credit Suisse to have to declare bankruptcy.

While it is difficult to extrapolate what it means for crypto, with already low liquidity, this can’t be good as we would experience further outflows of capital alongside tightening of economies, pummeling prices even more.

This would just simply mean we would pummel into a deeper winter, and perhaps a one worse than 2018 since it is the first crypto bear market that has coincided with TradFi bear markets.

We should not fade the Credit Suisse panic. Its always good to monitor situations, as while they may not lead to the collapse of the banking system, the stock could certainly go the zero due to bond market liquidity issues.

Also Read: Is There Space For DeFi & Institutions To Coexist? Here’s What The Biggest Names In Crypto Said During Token2049