WL, PFP, Rug: Here Are The Top 15 NFT Slangs You Need To Know 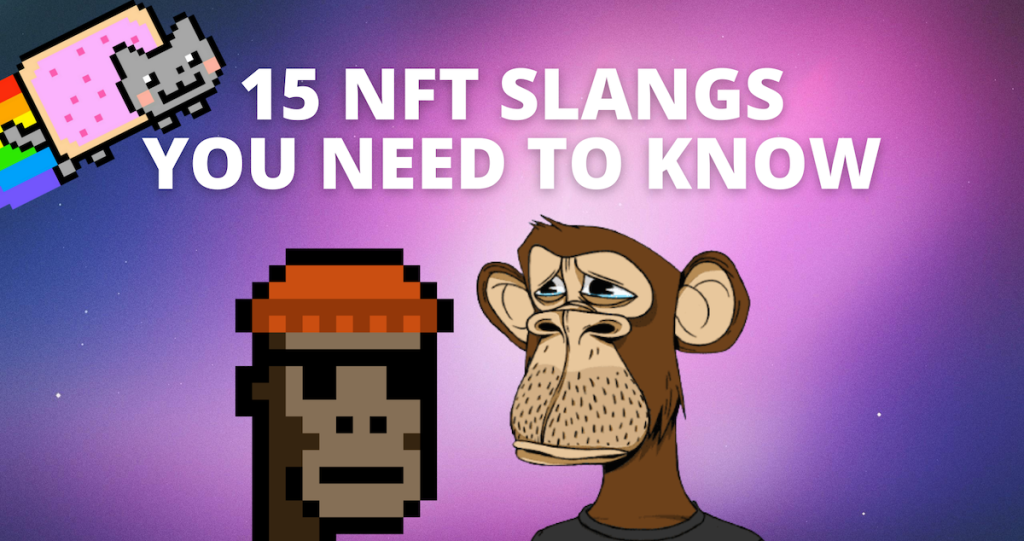 Have you seen acronyms and terms that have left you scratching your head in NFT Discord groups?

In this article, we break down the top 15 NFT slangs that you should know.

WL is short for whitelist. Generally, whitelisted members are able to mint the NFT during the presale period. The pre-sale can last for hours, or days, ahead of the public sale, and differs from project to project.

Whitelists are commonly granted to early community members and those who contributed to the project. Other individuals can get whitelisted from giveaways and raffles too.

Grinding is the act of actively participating or promoting a project to archive a goal. The goal is usually getting whitelisted for the project.

There are actually NFT whitelist grinders for hire to help individuals grind for whitelist. The grinders would actively promote the project on social media and interact with the community members to make them feel at home.

FP, floor or floor price is the lowest asking price for a collection on a secondary market.

Usually, the floor is filled with NFTs that have the lowest ranking traits. At the time of writing, the FP of Bored Ape Yacht Club (BAYC) is 98 ETH.

PFP is an acronym for Profile Picture. Many community members show support by changing their profile picture into their favourite NFT project.

There are many instances where popular celebrities change their social media PFP into an NFT and the project FP start skyrocketing.

Airdrops are the free distribution of tokens or NFTs. Airdrops are generally given out to reward the community members for their action or support for the project.

One of the most popular airdrops in the NFT scene is when Bored Ape Yacht Club holders were airdropped a “mutant serum” that allowed them to mint a free Mutant Ape. At the time of writing, the fp for a mutant ape is 18 ETH.

Shilling is the act of promoting and advertising a project on social media or other channels. Influencers and celebrities typically shill a project to draw attention to it and help the project gain traction.

Degen is short for degenerate. It is commonly referred to as a risky move. It can also be used to describe an individual who does not do any due diligence.

No, it is not the thick cloth that covers the floor.

Rug is actually short for rugpull. It refers to the act when the project team abandon the project and runs away with the funds.

Unfortunately, it is quite a common occurrence in the crypto space and users have to be vigilant and look out for red flags to avoid potential rug pulls.

Ded is short for Dead. Commonly used as an expression of unhappiness.

“Wen moon?” This must be one of the most common terms I have come across in the crypto space. Moon generally refers to the price of an asset skyrocketing to the moon.

DYOR short for Do Your Own Research. It is a very common term used by the community and especially influencers to remove liability from themself when featuring a project.

Example: I just aped into Squiggles, but DYOR first!

NFA is short for Not Financial Advice. NFA is very similar to the previous term DYOR, as it is essentially used to remove liability when mentioning a project.

The platform allows users to buy, sell and even bid on NFTs. They offer a range of NFT from the OG blue-chip CryptoPunks to the latest hype project Karafuru.

Flipping refers to the act of buying at a lower price and selling it quickly for a profit.

Flipping is very popular in the NFT space as it is a common occurrence for individuals to mint a popular project and quickly sell it in a secondary marketplace for a tidy profit.

Some of the top questions that scientists don’t have answers to include “What is on the other side of the black hole?” “What happens after we die?” and “Why everyone in crypto is using Ser and not Sir?!”

When I first entered the crypto space, this question kept me up all night.

Trust me when I say that I have exhausted all my resources to dig deep for answers.

For now, all I know is that Ser is a polite and respectful way to address another individual.

Maybe one day, the brightest mind can crack the code and know the answer to why is it Ser and not Sir.

This isn’t the complete list of crypto slangs in our vocabulary, but these are some of the more uncommon ones that true blue crypto OGs or nerds will know.

Hopefully, you can finally understand the following sentence: Ser, I aped into a degen pfp NFT hoping to flip it on OS when it moon but it was a rug. DED.