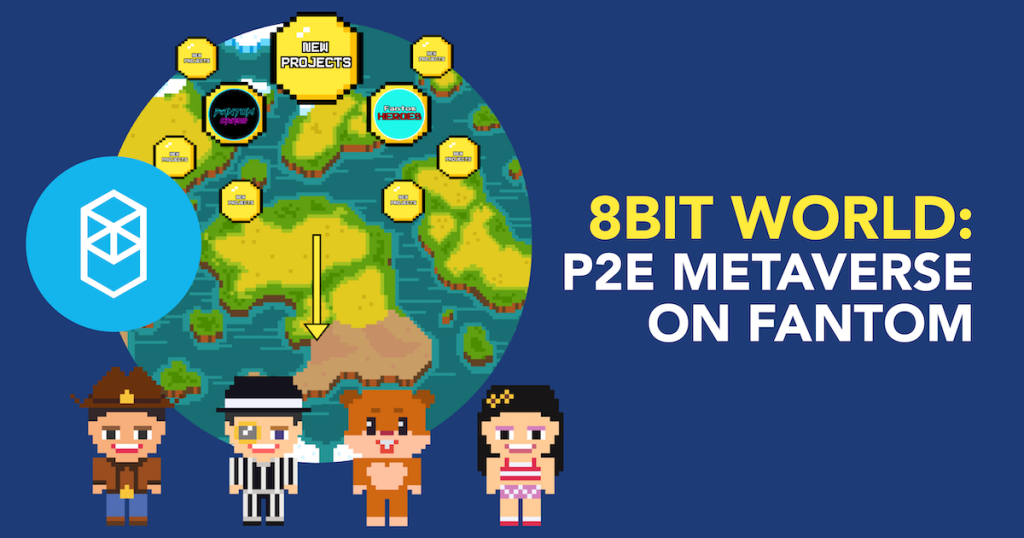 8BIT World is a play-to-earn (P2E) metaverse on Fantom. Having built amazing architecture with 349 lands to explore, it has a massive ecosystem ranging from many landscapes such as the snow, villages, cities and many more.

Similar to the Ubisoft concept of Growtopia, users can socialize in the community in different lands specializing in different topics.

In addition, 8BIT is a gamified Initial Farm Offering (IFO) metaverse aiming to attract new projects on the Fantom Ecosystem. Netizens will be able to farm tokens of other projects through the concept of the IFO.

It aims to connect players, NFT communities as well as cryptocurrency projects on its platform.

Its unique features include providing a launchpad for projects for people looking for a catalyst to launch. Tokens allow users to buy in-game items, breed Netizens, upload and advertise products.

8BIT is built on the theme of nostalgia, and aims to bring back memories of the 90s with the 349 lands it offers. The lands available range from the snowy Fujiko village to the vast Dandu Desert.

To join the community, 7,777 genesis Netizens had to be minted. It has sine been fully minted, so users can only obtain these items via the secondary market on PaintSwap.

In order to breed Netizens, users need to have 100 FTM, as well as 8BIT tokens to be eligible. In addition, all 8BIT tokens received from breeding are burned.

In Q4 2021, Beta V1 was released. At that stage, players were able to connect to the Metaverse but limited characters were available.

Its most recent update was allow access to the Metaverse via mobile, which the team demonstrated. Based on their roadmap, they are currently working on Beta V2, which would allow users to explore Metaverse 2.0, Dungeon (PVE) and P2E and farming. This should be finished in Q1 2022.

In Q2, 2022, its Metaverse version 3 is expected to come out. This time, there will be PVP available and further enhancements of its P2E and Farming. By Q3, Version 4 is expected to be released, with its mobile app and scholarship system.

According to the Fantom Foundation, the core team comprises of many professionals who have worked in many of the top 100 crypto projects listed in CoinMarketCap.

In addition, the team has 57 full-time game designers working across the departments of Environment design, world-building, character design and animation. Their main purpose is to integrate and build the Fantom community via the use of their launchpad.

The team also plans to work on a YouTube series to better explain their vision. The community can look forward to things such as 8BIT World YouTube series, Metaverse mobile, native token launches, and many more.

Being a launchpad on Fantom definitely sounds promising, as Fantom’s Metaverse is not well-developed unlike Solana, which means there are many opportunities.

In addition, Fantom’s cheap transaction fees allow for complicated and unique smart contracts to be created without the worry of expensive gas fees.

Its fast transactions helps with a smooth game interface and a convenient and publicly available RPC only bolsters this.

As with all Metaverse projects, marketing, and community perception as well as the hype is crucial for its success.

Its integration with the Fantom ecosystem has proven that with players in the Metaverse being able to access SpiritSwap, PaintSwap, and NFTKEY who have purchased NFT lands.