A Complete Overview of Ethereum’s Scaling Solutions; All About Zero-Knowledge, Optimistic Rollups and Layer 3s 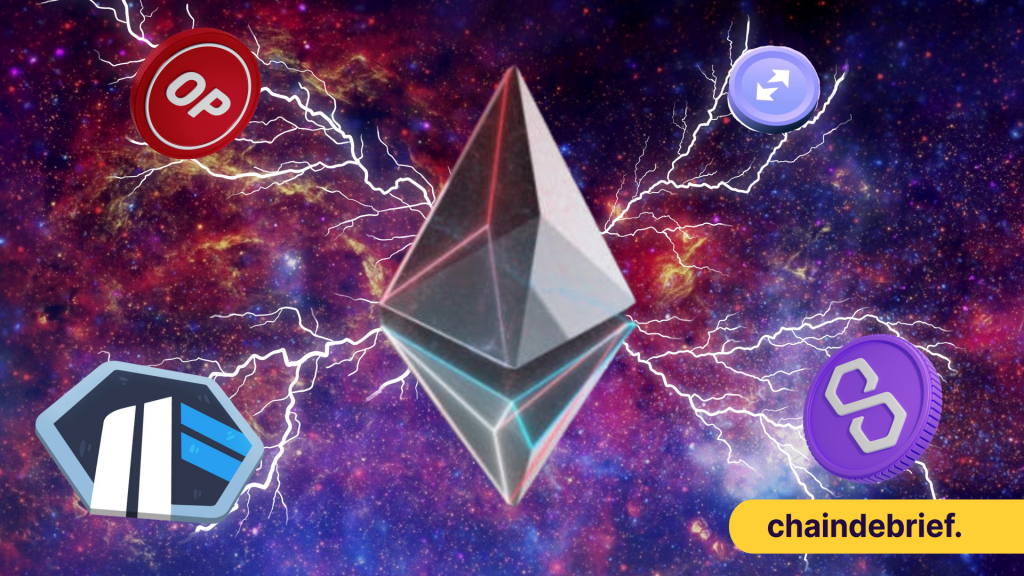 The layer1 wars at the end of 2021 were driven by high block space demand giving birth to what was commonly known as “Ethereum killers”. While there were doubts and chatter about overthrowing Ethereum’s throne, some of them proposed viable alternatives that Ethereum lacked, speed and high fees.

Ethereum and its “killers.”

Here’s a quick overview of how other killers faired this year, with similar activity by the end of the year.

Ethereum and TVL charts also display similar movements in similar tandem, growing quieter in the latter half of the year.

But in terms of total TVL is where Ethereum can flex its vibrancy. There is simply no competition.

While Ethereum might have a first-mover advantage, this year’s market tested who stood a chance in the highly volatile space, and the answer is pretty obvious.

DeFi has been down badly this year.

While we move forward with Ethereum continuing to advance in dominance, a particular component within the Ethereum ecosystem shares a similar thriving sentiment.

No, it’s not NFTs, but its scaling solutions, its layer2s.

Even with market turmoils this year, the L2 space managed to maintain its head above water for the most part. Being able to match the TVL of the biggest crypto exchange’s (Binance) DeFi ecosystem is no easy feat, but this collective of scaling solutions is undoubtedly pulling its weight.

Arbitrum and Optimism, especially, are thriving in the department of active addresses both see upward signs even in the heart of the bear market.

This bear market has proven that, as gas fees drop significantly, on-chain activity mainly still happens on Ethereum. With the emergence and adoption of scalable L2s inherited by Ethereum itself, it seems the coming cycle will likely be Ethereum ecosystem centric.

This falls in line with the idea that there will only be one/or a small handful of blockchains will remain while the rest of the noise will fall out. Only time can tell though who the category winners are, though.

Explaining ZK and Optimistic with movies

At the core of L2 scaling solutions are multiple backbones of technology designed to remove most of the load from the Ethereum mainnet. This allows for more TPS and far lower fees, the piece of the puzzle Ethereum needs.

Think of L2s as separate blockchains that extend their help to Ethereum in helping process transactions.

Imagine having a party with all your friends, and everyone wants a piece of cake.

If you only have one knife, it might take a long time for everyone to get a slice. But if you have more knives, you can cut the cake into more pieces simultaneously, and everyone can get a slice faster. That’s what a layer2 scaling solution does – it helps things work better and faster when many people use them.

Optimistic rollups can be categorized as “fraud proofs”. Commonly utilized on the Arbitrum and Optimism, these layer 2 adopts the concept of “innocent before proven guilty.”

Information of a transaction is assumed to be true, added to the traction batch and is later reviewed by ‘watchers’ to ensure that nothing malicious is happening.

Imagine you and your friends want to buy a ticket to a cruise.

If each one of you decides to queue individually, it will take a long time for everyone to get through the line and buy your ticket. However, if you guys go to one ticketing booth together and buy the ticket as a group, it will be much faster and easier.

Similarly, Optimistic rollups allow transactions to be processed in groups, making the network faster and cheaper for everyone.

Imagine you all got your ticket and want to enter the cruise as a group. Before you do, you have to go. A guard is waiting at the entry point who will check that each of you possesses a valid ticket, as it is possible for someone to sneak in without a valid ticket.

This is similar to how fraud-proof works for Optimistic rollups, as they catch any fraudulent transactions and prevent them from being processed, keeping the network safe and secure.

Zero-knowledge, however, uses validity proofs. They adopt the concept of “guilty until proven innocent.”

Here, the exchange of information between the ‘prover’ and the ‘verifier’ relies on cryptography & math.

The information is shared but never revealed. There are two types of validity proofs. SNARKS and STARKS. STARKS is more scalable.

Imagine you are captain America, and you discover that the secret to lifting thor’s hammer is to chant a specific eight-three-digit passcode. Ironman is hanging around and wants to know the juicy secret, and he thinks you are lying.

You catch Thor in a face-off and confront him, telling him you know his secret in lifting the hammer. It is not because he is specially chosen, but instead chants a secret eight-three-digit passcode every time before he lifts the hammer.

You reveal two numbers in no particular order, “384” and “721”, to Thor. Thor was taken aback and confirmed those numbers were correct, but Ironman still questioned the validity of the other numbers you knew; you could only understand two out of the eight three-digit numbers.

You proceed to the hammer itself and whisper the eight three-digit passcode under your breath. And voila, you are a Mjolnir-yielding superhero.

In this analogy, you only revealed two numbers and did not reveal the entire passcode to Ironman but proved to him that you knew the secret passcode by lifting Thor’s hammer.

ZK rollups can be used to prove that a transaction is valid without revealing the details of the transaction. This can help to make transactions on the Ethereum network more private and secure while still allowing them to be verified by the network.

While validity proofs are more challenging to implement, as they rely on a higher level of privacy and data security, they are known to be the ‘superior’ scaling technology in most aspects.

We all know EVM, but this brings it to another level. The zk-EVM has been a work in progress for a long time coming. It will likely be one of the most anticipated scaling solutions, with products like ZKSYNC and Polygon Hermez already making developments.

In August, Vitalik published a paper on the different types of ZK-EVMs, a good read coming from the brainchild of Ethereum himself.

At its core, utilizing this technology to make cryptographic proofs of execution either “makes it much easier to verify the Ethereum chain itself or to build ZK-rollups that are (close to) equivalent to Ethereum provides but are much more scalable.”

A video podcast done by Bankless on zkEVM encapsulates the idea perfectly. Zk-EVM are complex concepts, and binging on the video below might be a good idea if you want to take a deeper step.

While I can certainly say layer2s has not seen its full potential/development yet, Layer 3s is often regarded as an application-specific rollup which presents itself with use-cases for companies looking to take their business on-chain in a scalable and secure way.

This is where the idea of Validium comes into play. The image below shows StarkEx’s app-specific L3, and Startnet is the L2.

In this thesis, the L3 generates the proofs off-chain to increase scalability, and they are sent in bulk to the L2, similarly to how L2 sends the bulk transactions to the L1 in the Ethereum mainnet.

However, the trade-off with scalability is likely, security. As the layers stack in increasing numbers, the likelihood of security being compromised will be more likely.

To explain it, imagine Validium is a tool that is used to help make sure that things are safe and correct. Imagine that you have a box full of toys and want to ensure that all the toys are in good condition and not broken.

You can use Validium to check the toys and ensure they are safe to play with.

Validium looks at the toys and ensures they are the right size, shape, and colour. If a toy is broken or missing something, Validium will tell you so you can fix it or throw it away. This helps keep your toys safe and ensures you can play with them without problems.

In the context of Ethereum, Validium is used similarly to check transactions on the network and ensure that they are correct. It helps to keep the network safe and secure and prevents transactions that are trying to cheat the system from being processed.

This year was almost like a circuit tester for the entire crypto market, a test on resiliency. However, looking into the metrics of Blockchain and DeFi, it has become more apparent that Ethereum has taken centre stage regarding crypto innovation and adoption.

With new innovation on the horizon and L2 space thriving, not only has Ethereum been widely regarded as a blue-chip investment in being a hub for DeFi and NFTs, but it has proven it with actual numbers, something not all Ethereum Killers go to battle with.