Are We in Arbitrum Season? 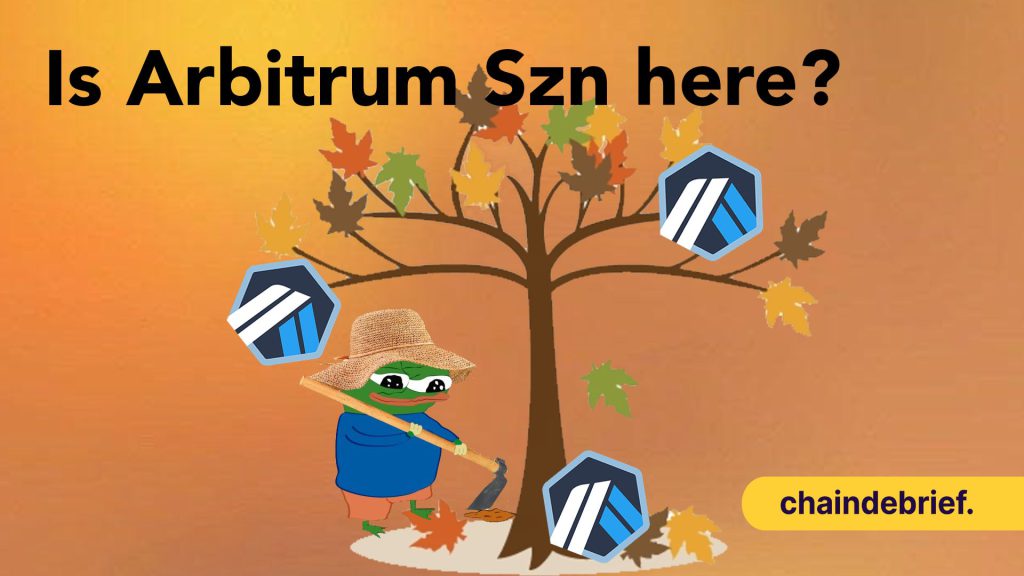 Despite the bear market, there are still noteworthy projects growing in both revenue and users.

One of them has been GMX, a trading protocol that has attracted a slew of attention due to the “real yield” narrative. Instead of inflationary tokens, the protocol pays out in earnings from traders on the platform.

Being built on Arbitrum, the protocol has also brought in more users to the network overall. With Optimism and Polygon having had their narratives with partnerships and yield farming opportunities, however, is Arbitrum finally getting its turn in the limelight?

Aribtrum is a Layer 2 scaling solution for Ethereum which utilizes Optimistic rollups. It was  developed by Offchain Labs, which is co-founded by Ed Felten, Steven Goldfeder, and Harry Kalodner.

The technology and vision of the protocol was outlined in an early 2018 research paper, before the technology was licensed from Princeton University (where Ed Felten was the Robert E Kahn Professor of Computer Science and Public Affairs) in a spin-out company (Offchain Labs).

Offchain first raised a USD 20million Series A round in April 2021, before announcing a USD 120million Series B fundraising round led by Lightspeed Venture Partners. These two rounds valued the company at USD 1.2billion.

While Total Value Locked (TVL) on most major chains have been down only since the implosion of LUNA, Arbitrum has seen a slight pickup in users.

Other metrics also return similar results, especially in terms of user activity on the network.

The arbitrum network only saw a sharp spike in transactions towards the tail end of the year, with an average of 15,000 new addresses daily in November, and 300,000 more transactions from its more recent high compared to the July 2022 high.

NFT volume on arbitrum has also been making higher lows over the last few months, despite volume across the wider market going down 99%. At the time of writing, the collection with the highest floor price is The Beacon V2, a free to play Web3.0 game, with a 1 $ETH floor price.

While Optimism had a lukewarm reception for its yield farming incentives, it was nothing close to the Avalanche Rush that resuscitated DeFi summer.

Arbitrum, on the other hand, has repeatedly discouraged speculation over a possible token, and has reassured the community that an airdrop is not currently in the works.

Instead, they have incentivized users to participate on the network via Arbitrum Odyssey, a multi-week initiative, where users are rewarded with an NFT.

These are currently trading at a floor price of approximately 0.0143 $ETH.

In a previous newsletter, we covered Cap Finance, a protocol that functioned similarly to GMX. Due to the arbitrum and real yield narratives, it’s native token, $CAP, has returned approximately 230% since then.

While we are not oracles, this trend has been consistent across several arbitrum-native tokens, thanks to demand for the ecosystem picking up.

In fact, Arbitrum is one of the few blockchains where a lending platform does not control a majority of the network’s TVL. While arguments can be made that GMX is a lending platform, its yield is only possible if there are a lot of active traders using the protocol.

If similar innovations start to occur on arbitrum, we could see a surge in user volume, and correspondingly, prices.

While Arbitrum has not announced an airdrop, and even informed that it was not actively developing a token, users have flocked over en masse in anticipation of one.

Regardless of whether it occurs, the promise of projects that are offering crypto users real utility like GMX and Cap Finance means that it could be worthwhile to bridge over, if only to explore its ecosystem.

However, as users continue to explore the arbitrum ecosystem and potentially push prices up, be careful not to get caught up in the hype and buy the top, especially in the scared and illiquid environment crypto is currently stuck in.