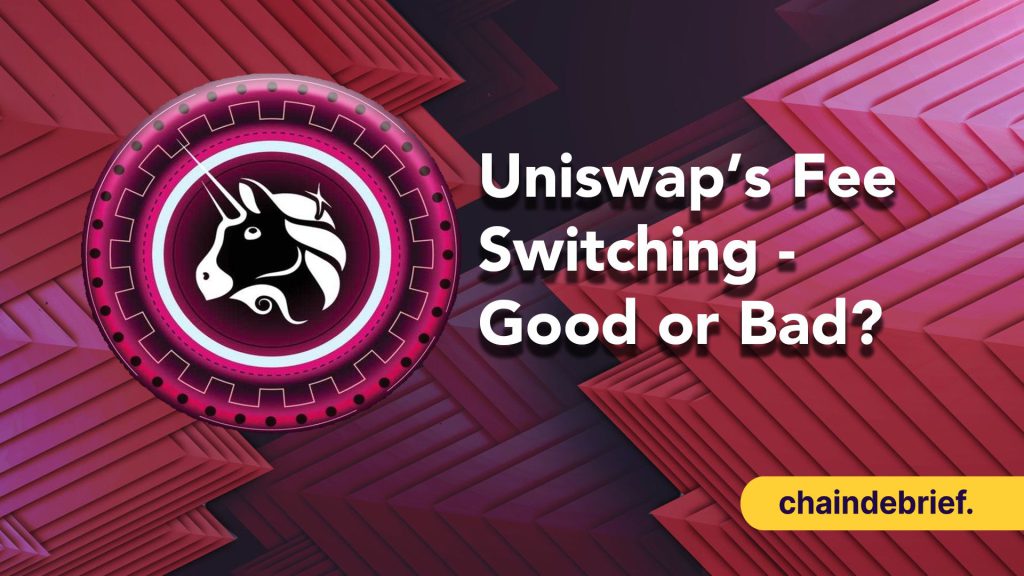 Few protocols are actually profitable – and Uniswap is trying to be one of them.

While the Decentralized Exchange technically does not make money via transactions, it does have grounds for profitability. This is thanks to a recent governance proposal, where a “fee-switch” mechanism has been turned on for three liquidity pools.

But it’s not all peaches and roses – what are the implications of a fee switch, and who wins and loses with this new system?

Also Read: Uniswap Users Were Hacked For $7 Million – Who’s Next?

Uniswap is the fifth largest protocol by Total Value Locked (TVL), with $UNI as its governance token. With governance being more meme than anything at this point, a proposal was made to grant yield to holders via a “fee switch”.

Currently, Uniswap charges a 0.3% fee for every transaction, which goes back directly to liquidity providers (LPs)

The “fee switch” will entail

While this seems like a no-brainer for the protocol, rewards will decrease for those in the liquidity pools.

LPs would therefore not be in favor of this – and guess who holds all the $UNI tokens?

Should The Switch Be Turned On?

For context, the daily revenue for Uniswap sometimes exceeds that of Ethereum. Despite this position, $UNI holders are at a significant loss in this current market with a common consensus that this is due to the “fee switch” being inactive.

The current proposal suggests turning the switch on for three liquidity pools, taking a 10% cut from the LP fees for 120 days.

$UNI holders would definitely be happy to have this mechanism implemented, but LPs would definitely not be so happy seeing their earnings drop. We could even see LPs pulling their holdings from Uniswap, significantly draining the depth of its liquidity.

Furthermore, this can technically trigger a class action lawsuit on the basis of selling “unregistered securities”.

The main risk however is that providing liquidity on Uniswap V3 is already notoriously difficult due to its use of concentrated liquidity, which requires excessive active management.

Given the difficulty in maintaining profitability, cutting LP providers can create a negative feedback loop which would cause the loss of market share. Given the hypercompetitive market with little differentiation and current lack of value innovation between DEXs, this means that it is extremely easy to lose market share but extremely difficult to gain market share.

However, Uniswap is one of the few protocols to actually not take a cut from LPs. Protocols like Curve and Balancer are already doing so. Given this rationale, it is quite unlikely Uniswap will lose much market share.

The Fee Switch is only active in 3 pools | What if it is active in all?

At first glance as highlighted it is quite unrealistic to activate the “Fee Switch” Mechanism in all of the liquidity pools. The primary reason is the need for approval via Uniswap governance.

However, it is quite likely that it could be turned on for a majority of the pools as this is the industry standard for many protocols.

If we assume a base of a 10% protocol fee across all pools, Uniswap would have earned $120.8 Million over the last 365 days, making it the 7th highest protocol revenue of any Decentralized Application.

This would result in the transition from an unsustainable and unplanned future to a more temporal and probable one.

However, secondary factors such as price also plays a key role in driving market cap and gross merchandise volume, which in turn would generate more value for holders and LP providers. Especially with the merge coming next month, Uniswap could see larger and more widespread adoption in the coming months given its crucial role in the DeFi Ethereum Ecosystem particularly.

Also Read: $KUJI Up 155% In 2 Weeks, What Is Kujira And How It Is Driving Real Value