Anchor Protocol’s Yield Is Rapidly Depleting: The Solutions, And Will Anchor V2 Save It? 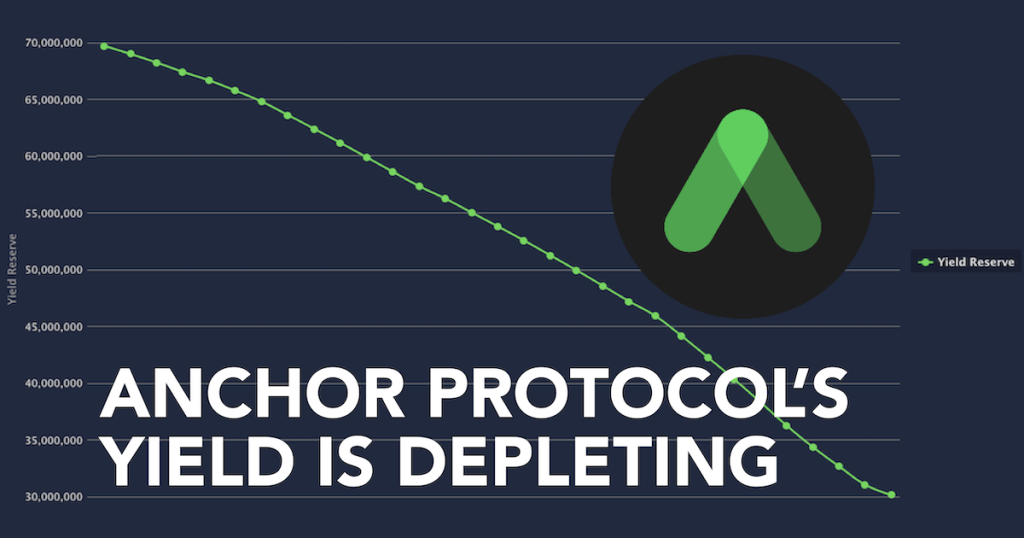 In the past few weeks, the Terra Community has been debating on an important issue — the rapidly depleting yield reserve of Anchor Protocol.

At the current rate, Anchor Protocol users are only left with a month at most, before the 19.5% rate has to be reduced if nothing changes. So, what is being done about it?

Before we look further, let’s have a recap on how Anchor earns its income. This income comes from two sources — yield from bAssets (bonded assets) and interest paid by borrowers.

Currently, the yield from LUNA hovers around 8% while that from ETH is around 5%.

As borrowers provide bAssets in Anchor, all staking yields accrue within Anchor and get paid out to depositors.

This is coupled with the interest that borrowers must pay when borrowing UST using the protocol. In times when the interest earned by Anchor is more than is required to be paid out, this excess goes to what we know as the yield reserve.

In contrast, when the interest earned is less than what is necessary to be paid out, the protocol will tap on the yield reserve to maintain the 19.5% rate.

This is what is happening right now, as deposits continue to skyrocket while borrow value and collateral provided flatlines and even dipped with the recent volatility in the markets.

Recently, Do Kwon, co-founder and CEO of Terraform Labs posted the poll above, his intention to replenish the yield reserve. While the replenishment has not taken place yet, I believe he will follow through with the results of the poll shortly.

However, it is important to note that if this refill does take place, it would be the second time. The first top-up happened in July 2021, after the devastating crash of May 2021.

Is a refill unsustainable?

According to this Twitter thread by Anchor, the reasons for the first replenishment include allowing “sufficient time for the introduction of more collateral types and self-sustainable protocols improvements coming in the next couple weeks and in V2.”

Well, you might say that this sounds a lot like the current situation, and you may be right. Only two changes have taken place since then which are the integration of bETH and the raising of max LTV to 60%.

Integration of bSOL and bATOM seems to be taking a much longer time. However, I feel that this is a necessary move as Terra is still in its growth stage and has yet to stabilize.

Anchor protocol can be said to be the bedrock of the Terra ecosystem. Investors are increasingly looking at the 19.5% as the benchmark rate across DeFi. Multiple projects have built or are building on top of Anchor as well. Allowing the yield to adjust downwards naturally at this point will lead to rippling effects being felt across the ecosystem.

If I could draw an analogy, I think this would be similar to how a company’s share price can drop drastically even though they announced a profit during earning seasons. The main reason for this more often than not is because expectations, either from analysts or shareholders, were not met. Hence, now is just not the time yet to let go in my opinion.

However, topping up the yield reserve continuously is ultimately unsustainable, and it seems like we are back to square one with the same problem. So, what is actually the issue?

The main issue was highlighted in a thread by Anchor citing lengthy third-party protocol integrations and audits that can take upwards of three months. As a result, we are limited to using only bLUNA or bETH to provide as collateral. This greatly limits the amount of interest that Anchor could potentially earn from borrowers.

Furthermore, with plans to go cross-chain. Reconfigurations have to be made to the protocol and this might have shifted priorities. Thus, this might have been another factor adding to the delay of new bAssets for collateral.

What are some potential solutions?

What can we do about it? If we look at Anchor’s forum, there has been much discussion lately and many wonderful ideas have emerged.

The main idea for now is the Anchor V2 Borrow Model. The gist of this is that the yield from bAssets and liquid staking derivatives such as LUNAx will go directly to the investors who provided them as collateral.

However, the borrow APR will increase as the value of collateral increases. Remember, staking yield will now be paid directly to the borrower rather than Anchor. Lastly, the interest paid by the borrower will go directly to depositors.

The main edge of this proposal is that Anchor will now only facilitate transactions between borrowers and depositors. Anchor will no longer have to handle the staking rewards earned from deposited bAssets and pay depositors their interest.

Another point to note is that new collateral types will only require a governance vote. This increases decentralisation while doing away with lengthy protocol integrations and audits. Below is an example from the author himself:

Another interesting idea is a tiered system. In such a model, users are incentivised to hold ANC tokens as the greater amount of tokens held (in relation to their portfolio) will lead to a higher rate that the user will be able to enjoy.

This is similar to what most CeFi lending and borrowing platforms are doing. I think this is great because it will give the ANC token more utility.

However, a downside is that it hinders dApps like Alice and Kash from building as they would then either have to introduce a lower savings rate for their target market or take on the risk of holding a volatile token (ANC) on their balance sheet. In addition, it will affect all protocols that have built or are building on Anchor Earn such as Pylon.

At the end of the day, the discussion is still ongoing. If you have any ideas, do chip in on Anchor’s forum. But for now, I’m looking forward to the top-up that will buy us more time!

Also Read: Strong Ecosystem And Potential Growth: Here’s Why I Reallocated My Crypto Portfolio To LUNA