2021 saw a mass launch of Layer 1 blockchains, from BSC and Polygon in the first half of 2021, to Solana, Terra, Avalanche, Harmony, Celo, Near, Elrond and many more towards the second half of 2021.

And this phenomenon is not simply restricted to L1s; Layer 2s such as Boba, Metis, Arbitrum and Optimism have also been rising in popularity. From 3 chains in 2020, there are now 145 operational chains.

But what is it that makes these chains stand out from one another? To be frank, from a usage point of view, the answer to this is simple: not much!

Perhaps, if one is comparing Ethereum and an alt-L1 like Solana, Solana is faster and cheaper by leaps and bounds, but its security and decentralisation are not as robust as Ethereum’s.

However, if one were to compare Solana and another alt-L1 like Avalanche, the difference is few and far between; they will both be fast, cheap and less secure.

This is because the main thesis for alt-L1s is that they are simply supposed to beat Ethereum in transaction cost and latency, and that’s where their purpose end.

Having used most of the aforementioned chains before, I can attest to the fact that they are indeed faster and cheaper than Ethereum, but comparing these alt-L1s with one another, who cares if my average cost per transaction is 100x cheaper at $0.00001 vs $0.001, or my transaction finality is halved at 1s vs 2s?

These statistics only work against Ethereum when transaction cost is over $5 and transaction finality can take a minute, but comparing alt-L1s, these insignificant comparisons imply that there is nothing much that can make an alt-L1 stand out from another alt-L1.

So why are there still alt-L1s like Aptos emerging? If a new chain were to be launched, I would personally prefer an L2 as it is as fast and cheap as alt-L1s, yet its security and decentralisation will be more robust as they are inherited from its parent L1 which is Ethereum.

With this in mind, let’s take a deep dive into Aptos and see how it stacks up against its competitors, specifically L2s given the over-saturated L1 market.

The Aptos blockchain is a monolithic L1 founded at the start of the year by a technically-rigorous team who was previously in charge of Diem, Meta’s blockchain project that got cancelled.

Aptos’ co-founder and CEO, Mo Shaikh, is an MBA graduate with an impressive resume detailing his work in MNCs like Blackrock, KPMG, and of course, Meta. He is also an advisor and board member for multiple startups.

Aptos’ other co-founder and CTO, Avery Ching, holds a PhD in Computer Engineering from NWU and shows a strong computing background with his prior experience in Yahoo and Meta.

All of Aptos’ other 64 employees are supposedly Software Engineers, Research Scientists, and strategists. Very impressive indeed.

Nevertheless, we cannot ignore the fact that this is the team profile of most blockchains too! BSC’s CZ, Polygon’s Sandeep Nailwal, Tron’s Justin Sun, Metis’ Elena Sinelnikova – all these blockchain founders have an even more prolific background than Aptos! So with regards to the founding team, it is evident that there is nothing that gives Aptos an edge.

Now, moving on to the technical side of the house, let’s discuss how Aptos is faster and cheaper than Ethereum.

There are validators and full nodes on Aptos. Validators, as the name suggests, validate transactions while full nodes distribute, verify and persist blockchain data. They are thus able to secure the network without requiring the computational power of validators.

Each validator and the full node can execute transactions in parallel, and transactions will first be grouped together as a batch, which will subsequently be sent to the validators by means of a pipeline model, implying that new batches can be broadcasted before the previous batch has been validated.

Through this batch processing and pipeline approach, throughput will intuitively increase as more transactions can be processed per unit of time. In my opinion, this is somewhat similar to L2 rollups, where transactions on L2 are rolled up into a block and broadcasted to the parent L1 for validation.

Aptos Latency and Cost of Transactions

However, the difference lies in how much greater Aptos is able to optimise the process, attaining a theoretical 160,000 transactions per second (tps), which is a massive improvement as compared to L2’s average theoretical tps of 4,500 and even handily beating Solana’s already impressive 65,000 tps.

With a higher network capacity, it is intuitive that the cost of transactions would hence be cheaper as well!

While this is fantastic news for proponents of innovation in the blockchain space, the fact remains that such a theoretically high tps will not get a chance to attain its full potential, as most chains only handle a few hundred tps.

During times of exponential usage (eg NFT mints), blockchains typically only handle a few thousand tps. And yet, at times, Solana is still unable to handle such network congestion despite its theoretical ability to handle 65,000 tps.

Thus, while 160,000 tps is an incredible feat, it will hardly ever be utilised and it also remains to be seen if, in practice, Aptos is able to handle such hectic moments.

Regarding transaction validation, there are a few typical security measures in place such as a reputation system to indicate the ‘honesty’ of validators when finding consensus.

This system is also commonly found in other L1s so this is nothing special. What is special to me, is the state syncing mechanism. This implies that if a validator were to crash, it can reconnect to the network via state sync and sync the blockchain state expeditiously!

This is one of the critical elements that also helped Aptos achieve its ridiculously high tps, and it also promotes decentralisation as an efficient state sync mechanism allows for more potential validators to be chosen from.

However, at the end of the day, Aptos’ ~19,000 nodes pale in comparison to Ethereum’s ~300,000 nodes, resulting in a lower degree of decentralisation and security.

Nevertheless, there are some novel security mechanisms that set Aptos apart from other chains, but this relates more to account security rather than on-chain security.

This brings about greater convenience, especially if you suspect your account may be compromised as you can simply change your key, instead of going through the hassle of creating a new wallet and transferring your funds over.

On this note of key security, another system that has been put in place is private key recovery. This means that if you forget your key, there are still ways to recover it such that you won’t lose access to your account forever, which is the case for most blockchains presently.

Together, these 2 measures strive to render the whole process of interacting with blockchains more intuitive and beginner-friendly for non-technical users by designing it like how Web 2 interfaces are designed – sleek and convenient to use.

Speaking of convenience, Aptos also introduces this concept of multi-call transactions, whereby multiple transactions can be executed at once.

For instance, when providing liquidity on most blockchains, liquidity providers will have to approve the usage of their funds before being able to deposit their LP tokens into the pool. With multicall transactions, instead of signing for 2 transactions, simply signing 1 transaction is sufficient for the whole process to be executed in one shot, thereby bringing about seamless convenience for users.

Lastly, let’s talk about funding. After raising $200 million earlier this year, Aptos raised another $150 million in July, and its most recent valuation sits at nearly $2 billion USD. This ranks Aptos among the top 30 crypto projects! And most of Aptos’ investors are well-known in the crypto VC space, including a16z, FTX Ventures, Coinbase Ventures and Temasek!

Given how Aptos has attracted these big-name investors, I guess it would then come as a surprise that my ultimate conclusion regarding my outlook on Aptos, is still one mired with uncertainty.

Obviously, it goes without saying that despite its lower decentralisation and security, there are many positives where Aptos outshines its peers such as its exceptional tps and user-friendliness, but as mentioned earlier, tps makes a significant difference when a chain goes from a few hundred tps to a few thousand tps. On the other hand, going from 60,000 tps to 160,000 tps will be of minimal impact when Web 3 activity is still relatively muted compared to Web 2 activity.

Perhaps, Aptos’ user-friendliness may be able to attract non-crypto-natives to interact with the blockchain and generate more on-chain activity, but this will only target a very small minority of people.

This is because the public’s unwillingness to use blockchain stems from inertia resulting from an inherent fear of the unknown. And as long as blockchain remains an enigma, just because a chain allows users to rotate and recover their private keys or sign multiple transactions at once, will not negate this issue.

Instead, what blockchain needs for mass adoption is time, which, unfortunately for Aptos, gives other projects the opportunity to innovate further and possibly supersede Aptos in tps and seamlessness.

Therefore, I am of the contrarian viewpoint that Aptos is a project not worth investing in for the long term. But putting aside my personal analysis, one cannot simply ignore the project’s hype and impressive list of VCs, and as such, I intend to employ short-term trading strategies once it goes live. 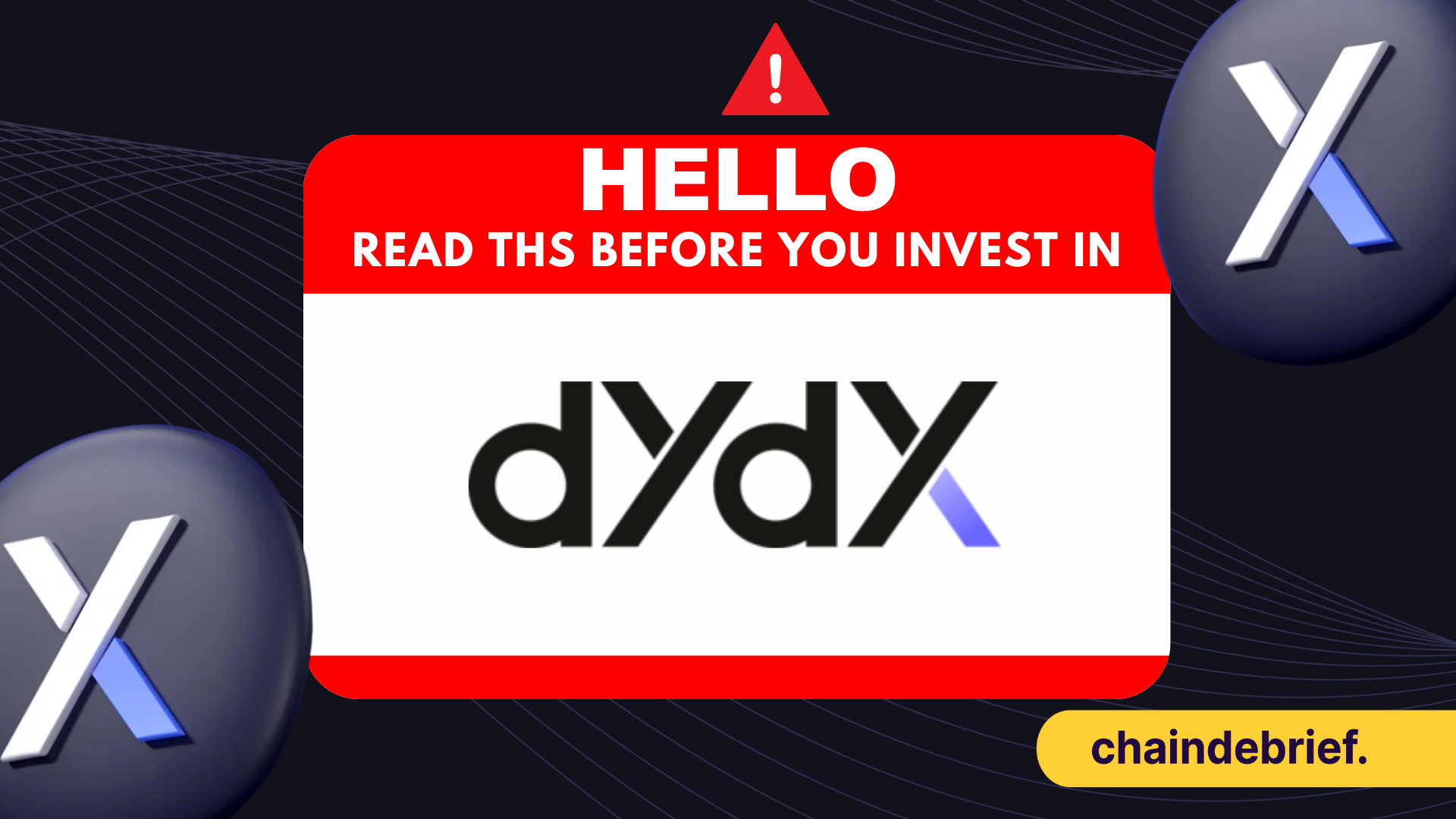