Will Stablecoins Replace Fiat? Reasons Why Crypto Could Be The Future 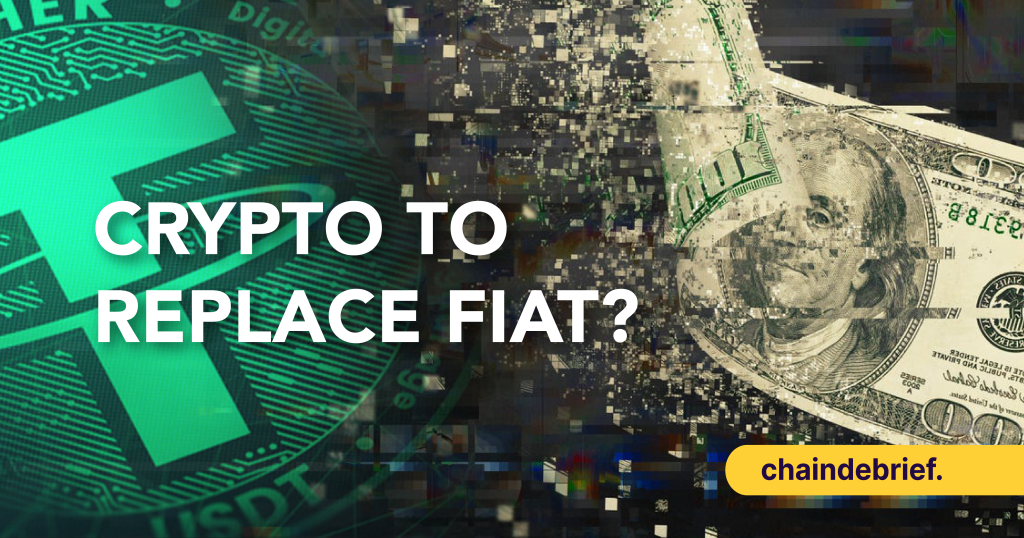 Stablecoins are cryptocurrencies which have a value that is pegged to that of another currency, commodity or financial instrument.

Stablecoins aim to provide an alternative to the high volatility of the popular cryptocurrencies such as Bitcoin (BTC), Ethereum (ETH) and many others that are less suitable for wide use in transactions.

Stablecoins are not accepted everywhere. The possibility of using them depends on national policies and regulations. Some countries have banned crypto altogether, while others continuously promote its use.

When it comes to crypto, though, stablecoins are preferred by regulators, rather than volatile assets like BTC. For instance, the US approved the use of stablecoin cryptocurrency for bank payments.

In the latter case, banks can connect to blockchains as validator nodes, and transact stablecoin payments on behalf of their customers. It makes stablecoins more akin to traditional fiat money than ever before.

Transaction speed is influenced by several factors such as block time, block size, transaction fees, and network traffic depending on the activity on the blockchain.

This is often still much faster than a transaction happening between banks. Faster transactions would enable businesses to complete more transactions than before. In economies where the inflow of capital can be done at a faster rate, stablecoins might be the gateway in spurring economic activities within the country.

Major credit card companies such as Visa and MasterCard charges 1% for overseas transaction.

Stablecoins can solve this issue as it has a fixed withdrawal cost depending on the network. For example, withdrawing USDT out of exchanges on TRC20 network usually requires only 1 USDT no matter the size of the transfer.

For a $1M transfer, a 1% processing fee would have cost $10k as compared to a mere 1 USDT for the same amount transacted on the blockchain. That’s a huge difference in fees.

Cheaper fees will encourage businesses to make more transactions at lower costs. Funds that were set aside for the processing fee could be utilized elsewhere with the removal of the intermediary.

Transactions on the blockchain can be viewed on a blockchain explorer by anyone.

Thus, there will never be a case where one party is not able to confirm proof of payment as the transaction is cemented onto the blockchain.

Transparency might be a double edged sword. The beauty of the blockchain allows anyone to track transactions made by whales, high net worth individuals or institutions but comes at the expense of their privacy of trade.

In my opinion, there might be a greater adoption of VCs and institutions when privacy protocols become more robust and reliable.

Let’s take a look at the risks involved in holding stablecoins instead of fiat. Due to these inherent risks in stablecoins as compared to fiat, I believe holders / investors should be rewarded with a premium as there is no real reason to be holding them as one is better off having cash.

Also Read: Are All Stablecoins Doomed To Crash? Stablecoin Fundamentals You Have To Know

Vulnerabilities in smart contracts cost north of USD $100M in the DeFi sector alone in 2020 according to CipherTrace.

To put this into perspective, these hacks accounted for 50% of all the security mishaps in the entire industry. This highlights that smart contract protocols are increasingly singled out as a potential inroad by bad actors.

Smart contracts are generally the most vulnerable points for cyber-attack and technology failures. Like any other software code, smart contracts require robust testing and adequate controls to mitigate potential risks to blockchain-based business processes.

Given the high risk setting of a smart contract, DeFi yields should be higher than TradFi as investors deserve to be paid a premium for holding stablecoins over fiat.

A liquidity premium is any form of additional compensation that is required to encourage investment in assets that cannot be easily and efficiently converted into cash at fair market value.

For example, a long-term bond will carry a higher interest rate than a short-term bond because it is more illiquid. The higher return offered is the liquidity premium offered to the investor as compensation for the additional risk.

In the case of stablecoins, there should be a liquidity premium too. Stablecoins are not utilised to purchase goods and services commonly on a day-to-day basis in most countries so far. Therefore, they should be able to be easily convertible to fiat at any time possible when you need it. However, that may not be the case during a black swan event when everyone tries to cash out.

Hence, there is no real incentive in holding stablecoins apart from getting a higher yield than fiat. This is why I believe the interest on stablecoins should be naturally higher than what traditional banks offer.

Having dry powder is good in this crypto market as you have the ability to buy as and when you like.

But what does it mean if the exchange that is holding your stablecoins becomes insolvent or gets hacked? All of your holdings will most likely be gone.

Thus, I believe holding stablecoins should be rewarded with a higher yield than holding cash as there are much more risks and it is not attractive enough to hold them just yet.

Holders should be compensated with smart contract risk and liquidity risk premium when choosing to park their funds in stablecoins rather than fiat.

I believe there will be a time where stablecoins will coexist with fiat. The tricky part comes in regulating them. When will central banks create their own Central Bank Digital Currency (CBDC)? that is the question on everyone’s mind. Will that be the end of stablecoins or will they continue to be of utility like today?

There’s a lot of uncertainties and factors that could affect the points mentioned and there is no clear direction as of now. My bet will be that digital currencies are here to stay and eventually be transacted on a daily basis in the real world.

Read More: Anchor Protocol is Dead: 5 Other Stablecoin Farms With Up To 12% APR