Crypto Is Fast Moving Towards The Mainstream: Here Are 6 Celebs That Are Involved In The Space 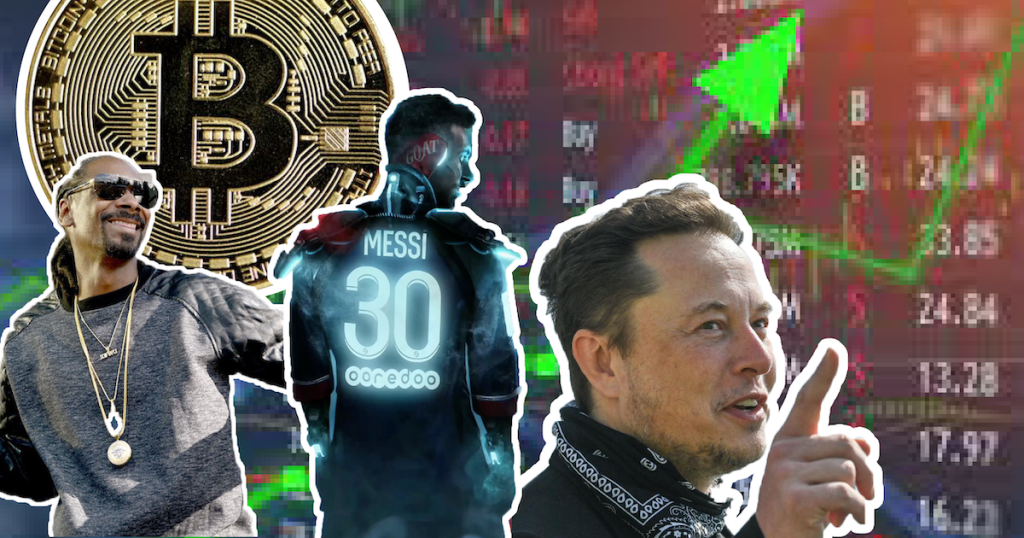 Recently, more and more celebrities have ventured into cryptocurrencies. Some are into Bitcoin, while others are into Ethereum, USDC and USDT, or even NFTs.

Apart from accepting digital coins as payment, they have also ventured into trading to make a profit, saving to earn interest, liquidity pool creation, and yield farming projects.

That said, here’s a look at 6 celebrities who are heavily involved in the cryptocurrency space:

Back in 2017, football superstar Lionel Messi became a global brand ambassador for Sirin Labs, the developer of the blockchain-based secure smartphone and all-in-one PC. Since then, the football star has been active in the crypto scene.

This August, he launched his own collection of non-fungible tokens (NFTs), “Messiverse”. The project was jointly launched with Ethernity, a blockchain platform offering access to officially licensed NFTs, and the art was created with his image by digital designer BossLogic.

Australia-based BossLogic is known for his work with Marvel Studios and Disney.

According to Ethernity, the launch featured Messi in an an other-worldly orbit, in AI-driven bionic form both in the future and the past.

Messi also left Spanish side Barcelona and signed a two-year contract with Qatari-owned Paris St Germain (PSG) this August, where his signing-on fee included some of the French club’s cryptocurrency fan tokens.

Fan tokens are a type of cryptocurrency that allow holders to vote on mostly minor decisions related to their clubs.

Although it’s not known how many albums he ultimately sold, Snoop Dog was selling them at 0.3 BTC in 2013.

In September, the rapper revealed on Twitter that he has been collecting NFTs under the pseudonym Cozomo de’ Medici. Snoop has been sharing about NFTs and detailed tips to make money from the crypto space using his Twitter handle @cozomomedici.

According to DappRadar’s portfolio estimate tool, the rapper’s wallet is loaded with NFT collectibles with prices amounting to over $17 million.

His portfolio is featured by nine things from the Ethereum blockchain-based CryptoPunks, and according to GeekCulture, his NFT wallet has CryptoPunk’s most crucial profile picture NFTs worth around $4.6 million.

Despite frequently mocking Bitcoin on Twitter, Tesla’s Techno king is possibly the most prominent figure in the Bitcoin community. In January this year, he added “#Bitcoin” to his Twitter account, which caused BTC’s price to skyrocket by 25%.

In addition, he has stated that his firm purchased $1.5 billion in Bitcoin, which equals to 7.7% of Tesla’s overall cash position, and is around 15% of its net cash position.

Musk is also notoriously known for being able to cause tremendous swings in the price of various cryptocurrencies. Most recently, he tweeted a picture of his Shiba Inu puppy, causing the price of the SHIB Token to skyrocket.

Billionaire Mark Cuban is at the forefront of the crypto boom, and he has built a portfolio of various digital tokens and blockchain companies.

In April this year, he shared that his portfolio allocation consists of “60% bitcoin, 30% Ethereum and 10% of the rest”.

Cuban is also a proponent of Bitcoin, and mentioned on Twitter that it has “a HUGE advantage” in that it has “ZERO competition” as a store of value.

Cuban sees bitcoin as an asset that will appreciate as demand increases, due to its limited supply,. He has previously compared it to gold.

The Shark Tank investor and Dallas Mavericks owner is so bullish on bitcoin that he predicts that it, along with Ethereum, will be viewed as “safe havens” in crypto in the future.

Also Read: Here’s A Look At What Billionaire Mark Cuban Is Holding In His Ethereum Wallet

Besides being a big name Hollywood actor, Ashton Kutcher is also a big tech investor and a longtime fan of blockchain technology.

In 2018, Kutcher donated $4 million in Ripple’s XRP tokens to her wildlife charity, The Ellen DeGeneres Wildlife Fund. At that time, XRP was the third-largest by market cap after Bitcoin and Ethereum. It is currently sixth.

“The more I learn about NFT’s the more excited I am to be a part of the crypto/tech community. It’s the future and I chose to partner with 1ofOne to help me navigate through the NFT community with something truly innovative and creative that tells a story about who I am,” said Tyson.

The crypto retail wave is arriving

Its not just seasoned investors that are vested in crypto — institutions, governments and large corporations have also been aiming to get some skin in the game.

Crypto adoption is also the fastest technological adoption in human history. We are currently witnessing the birth of a new asset class which will redefine ownership, finance, identity, communities, markets, real estate and so much more.

Early adopters are actively accumulating these scarce digital assets to jump onto the bandwagon before the mass majority comes onboard.

Also Read: Not Just JPEGs: What Are NFTs Exactly And Why They Are Here To Stay