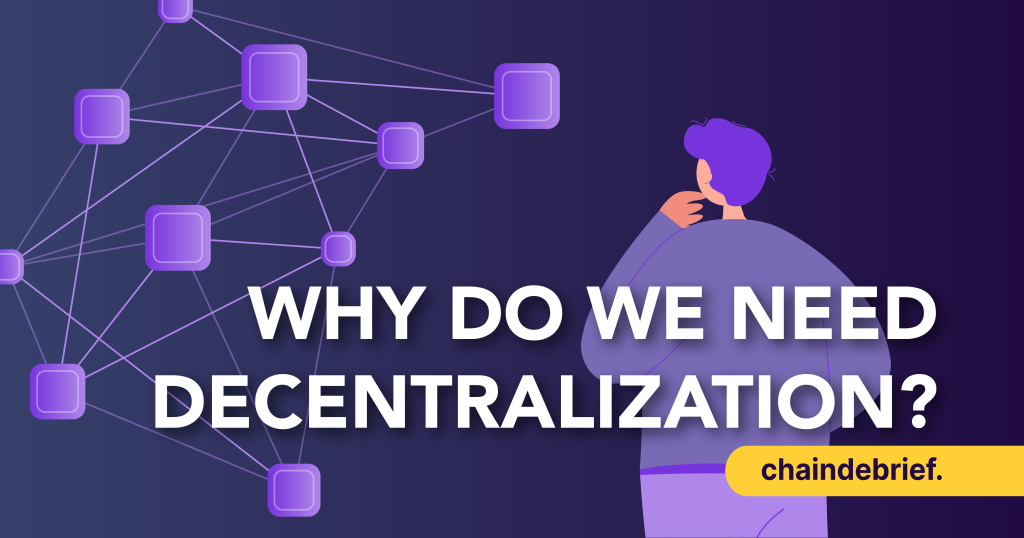 “What is decentralization? Why do we need it?”

These questions pop up every once in awhile, even for crypto natives. And let’s be real, even some so called “crypto experts” have no idea how to answer them.

What is needed is an electronic payment system based on cryptographic proof instead of trust, allowing any two willing parties to transact directly with each other without the need for a trusted third party.

Satoshi Nakamoto, the mastermind behind Bitcoin, created it with one goal in mind – eliminating the need for a trusted third party.

Also Read: Will Stablecoins Replace Fiat? Reasons Why Crypto Could Be The Future

The 12-part Bitcoin whitepaper highlighted the inefficiency of the traditional payment system and how a new online payment system would be more efficient without having to suffer from the weaknesses of a trust-based model.

But What is the problem with a trust-based model?

The Problem With Centralization

The idea of centralization in traditional finance refers to the use of a centralized entity as the trusted third party.

For instance, users trust banks to hold their assets.

One of the biggest risks of a centralized financial system is that it is a single point of failure. The 2008 global financial crisis showed the danger of centralized intermediaries as it brought down many big banks.

When those banks went bust, retail had to pay the price as nobody could make transactions, and all the money held by the banks were gone.

The centralized financial system is also not as friendly as many think it is. Research shows that about 25% of the world population does not have an account at a financial institution.

This could be due to a variety of reasons from discrimination against a particular group to other economical reasons.

A research paper done by assistant professor Hua Sun showed that there is evidence of discrimination against LGBTQ as same-sex couples are 73% more likely to be rejected when applying for a mortgage loan. Besides that, those that got their loan approved have to pay 0.02% to 0.2% more than the average mortgage loan.

Banks in low and middle-income countries also do not serve people with low balances as it is not economically sound for them to process their transactions. This leaves those people unbanked and without any access to the financial system.

A blockchain is decentralized in the sense that it is a distributed network where a huge group works together to maintain the network. No one has full control or authority over how the network operates and functions.

Pros and Cons of decentralization

Decentralization also means it operates in a trustless environment. In a decentralized blockchain network, users do not need to place their trust in anyone. Instead, users interact with smart contracts.

Interacting with smart contracts is just like using a vending machine. As long as it meets the right inputs, a certain output is guaranteed. The smart contract algorithm would automatically execute the agreement without centralized mechanisms.

Another pro of decentralization is full ownership of your assets. Many people think they own the asset as long as the asset is linked to their name. But do they really own the asset?

For example, If have US$1 Million dollars in the bank and the bank goes bust. On paper, I still own US$1 million but in reality, I might not get the full US$1 million dollars back. This concept can be applied to stocks and other assets that are held by a third party.

In crypto, you get full ownership and control of your assets. Even if the value of the cryptocurrencies goes to zero, you still retain the full township of your assets.

The more complex a smart contract is, the more vulnerable it is as it increases the risk of exploitation from different angles.

Another con of decentralization is that it is not as efficient as a centralized entity. If we look at Ethereum’s current transaction per second (TPS), it is far from what Visa or Mastercard can archive. Visa can handle 65,000 TPS while the current Ethereum can only handle 15 TPS.

While the decentralized network is not the most efficient way to handle transactions, users have to accept it as one of the trade-offs for the multiple benefits of decentralization.

Only when the decentralized system is able to reach a realm that is capable of replacing the existing infrastructure then it will see mass adoption.