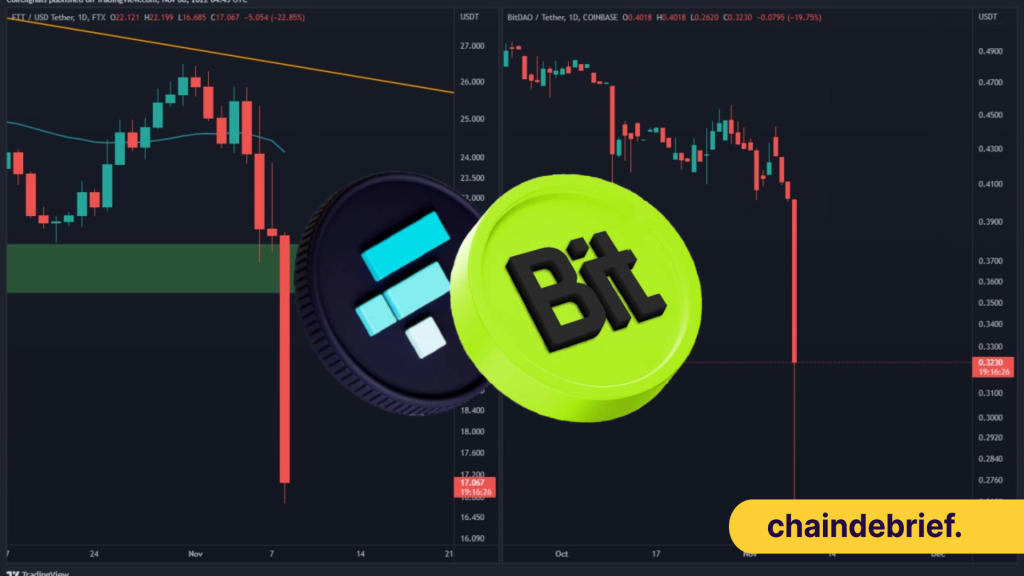 To aggravate more fear in the market, BitDAO has been swirled in into the mix.

In the past few hours, the native token to BitDAO, $BIT, plummeted in price from $0.4 to a low of $0.25. Despite $BIT having reinstated its value, it is still currently trading 8% down from its daily.

How did this happen?

This all started with rumours of FTX dumping their $BIT.

What came with the token swap deal was the promise of a lock-up period. Alameda is required to hold the tokens for at least three years.

In light of the recent FUD with FTX, it was easy for $BIT holders to assume the worst, and that is Alameda dumping their BIT, which was supposedly not to be touched upon agreement.

Bybit Co-Founder Ben Zhao tweeted that the BitDAO was “questioning” the sudden dump of the BIT token “caused by Alameda.”

The BitDAO community issued a proposal asking Alameda to provide the on-chain address of the token that was promised not to be sold. Otherwise, the district will decide what to do with the 3362315 FTT the BitDAO is currently holding.

If Alameda were to sell 100M BIT tokens, they would receive $30M. If there is a breach of commitment between the two parties, the likelihood of FTX/Alameda facing liquidity issues will be high.

In response to a valid concern by Ben of ByBit, Caroline from Alameda came forth to reassure the BitDAO community.

The beauty of blockchain transactions is their transparency. Alex, CEO of a blockchain analytics platform, Nansen, took Twitter to his findings.

According to his data search, Alameda research still holds the 100M BIT tokens as of 2nd Nov 2021.

The BIT tokens were sent to the FTX wallet one month later, as seen in the timestamp of the transfer on 9th Dec 2021.

FTX wallet has kept >100M BIT tokens since receiving them, but that balance fell below 100M BIT just yesterday.

This transaction is particular, but further investigation shows that the transaction that took the wallet below 100M BIT was made by Mirana Ventures, ByBit’s own VC arm.

Additionally, 92M BIT tokens have been transferred from the FTX wallet to the Alameda research wallet in response to a BitDAO community proposal request.

While many may be quick to judge, we can’t blame them. When their money is involved, the likelihood of people acting emotionally will be more evident.

This entire saga has not concluded, but it reminds me of a similar contagion tale with Celcius. And boy, I am terrified.

However, fear in the market will bring along opportunity in its back pockets.

One thing is for sure, the beauty of blockchain stands tall in proving its capabilities that traditional finance can’t. Without transparency, transactions will all be kept in the dark, and until audits are done, only people at the top know the inner goings of any dishonest act.

Also Read: Will There Be A Bank Run On FTX?