How This CEO Wants To Solve The Gaming Black Market 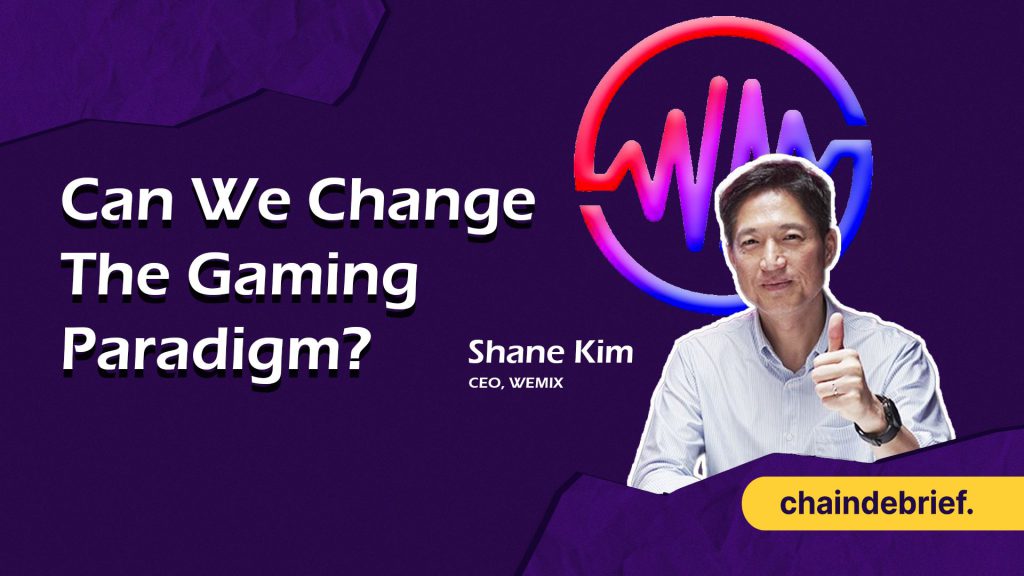 Did you know that the gaming industry is set to reach $256 billion by 2025? What’s more surprising is that the gaming black market is already valued at a fifth of that today, at approximately $50 billion.

WEMIX is coming to disrupt that.

Founded in 2018 under parent company WEMADE, the blockchain gaming platform has gone on to launch a full testnet and build an entire web3 gaming ecosystem.

We sat down with WEMIX CEO, Shane kim, to find out more.

From Social Networking To Web3 Gaming

Like many CEOs in the space, Kim started in Web2, beginning his journey in an SNS (Social Network Service) company.

While he took his skills to another top Korean game publisher, Netmarble, he eventually found his way to WEMIX, along with more than 20 years of experience in both the IT and gaming industry.

How WEMIX Stays Ahead of The Competition

The blockchain gaming space is a competitive one, with more than 1550 projects available to date.

“Right now, people feel (that it is difficult) to distinguish WEMIX from other blockchain gaming platforms”

While the blockchain gaming scene has developed since Kim entered the industry, he notes that WEMIX’s unique value proposition is making a “fun, well made and playable game”, putting the entertainment of users before any monetary incentives.

While WEMIX already has more than 20 games on their site, they plan to onboard 40 more by the end of the year – with a focus on fun.

Their most popular game, MIR4, has also taken players by storm – with more than 90,000 daily active players at its peak.

“Many blockchain games, their life cycle is too short. But MIR4 is still ongoing, and it has solid fundamentals”

With the success of games on WEMIX, they have also begun to expand, launching an entire ecosystem that includes the WEMIX mainnet, WEMIX.Fi for swaps and lending protocols, and WEMIX$, a 100% collateralized stablecoin.

While WEMIX is a Korean company, more than 95% of the users come from outside the region, mainly South-East Asia, where popular Web3 game Axie Infinity also saw major traction.

However, global adoption will still take some time, with Kim noting that “most North American and European users don’t actually like NFTs, tokens, and Web3 gaming.”

In spite of that, he is still working to create the “ideal in-game economic system” that could change their minds.

“If anyone could make money through a gaming experience, it’s a good thing, not only for South-East Asian users”

Pivoting from the endless chase of monetary incentives, putting the gaming experience first will help them appeal to even the most resistant NFT haters.

Furthermore, the gaming black market, or secondary market, in South Korea alone is worth over $1 billion dollars. Integrating blockchain technology would “bright games to the bright side of the mainstream economy”, giving a level of trust and legitimacy to these markets.

“It can change the paradigm of gaming.”

The Roadmap For WEMIX

With WEMADE having more than 20 years of experience in the gaming industry, WEMIX is focused on expanding their services past simply blockchain gaming.

“We’re preparing more than six DeFi protocols, and two kinds of NFT marketplaces … now we want to be the global leader of the blockchain industry”

This includes the WEMIX$, the native fully collateralized stablecoin for the WEMIX blockchain.

The next step in their roadmap would be WEMIX NILE, the first DAO-powered blockchain NFT platform. NILE will enable trustless and transparent projects in the form of concerts, art exhibits, sports, music, investments, and even businesses to be facilitated and managed through the DAO.

For the the full video and more on Shane Kim, check out the Chaindebrief Podcast HERE.