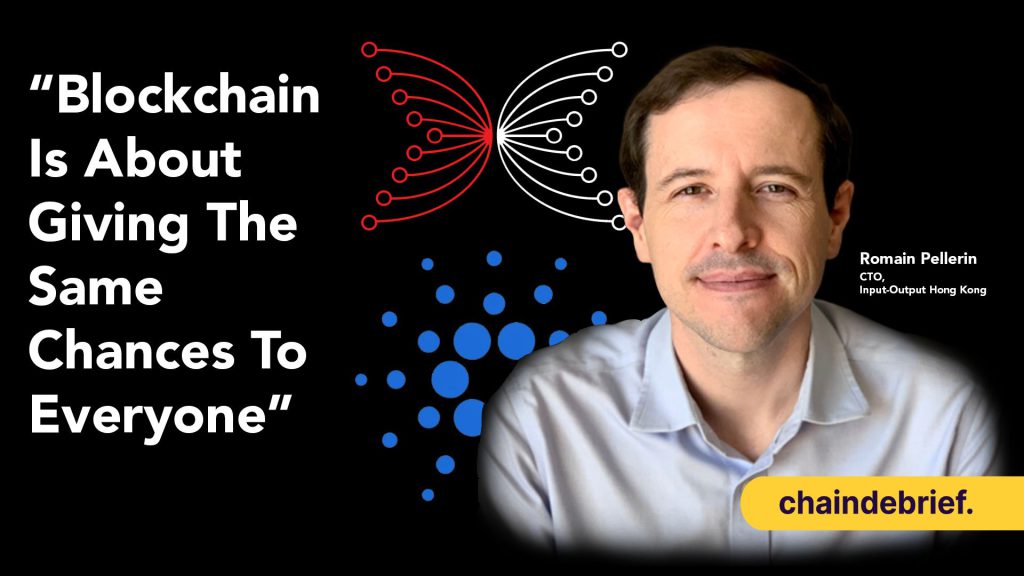 The cryptocurrency market is a volatile one. With multiple 1000% surges daily, Terra Luna’s crash, and constant rugs, it is hard to keep a project going for long.

In fact, only one token has stayed in the top 10 since 2017, aside from Bitcoin, Ethereum, and XRP.

And that token is Cardano ($ADA).

The project was founded by Charles Hoskinson, shortly after departing his position as CEO at the Ethereum Foundation, under the company Input Output Hong Kong (IOHK).

With Cardano’s Vasil upgrade set for September 22nd, we sat down with their Chief Technology Officer, Romain Pellerin, to learn more about Cardano’s role in the crypto ecosystem.

Before venturing into Web3.0, Romain Pellerin was already focused on the future of technology.

Having completed a PhD in computing and distributed systems, he founded Ubidreams – an IT company specialized in cross-platform mobile and internet of things applications.

“Coming up with Augmented Reality in 2010 was too early“

While he eventually pivoted to build innovative prototypes for corporations, Pellerin eventually heard of Bitcoin in 2011 from a mentor.

He was eventually reintroduced to Blockchain Technology in 2016, while working for a telemedicine company.

And the tech enthusiast has not looked back.

Since then, Pellerin built his own protocol, a Layer 2 programming language to address different public blockchains, and was eventually recruited by IOHK.

As Chief Technology Officer at IOHK, Pellerin’s day to day consists of leading 200+ engineers to deliver on their masterplan.

Having joined the company in 2020, he was astounded by how well laid-out their long-term goals were, as well as their methodologies.

While many Web3.0 projects align themselves with a vision of “go fast and break things”, Cardano’s academic peer-review system emphasizes security, reliability, and sustainability around their products.

With hacks happening seemingly everyday, their methods are a breath of fresh air in crypto.

Furthermore, their Chief Scientist, Aggelos Kiayias, wrote one of the most cited papers on Blockchain technology ever. Their over 150 free research papers are also used by leading protocols such as Mina and Polkadot.

“IO should be known for our contribution to the crypto ecosystem“

Being the biggest contributor of open-source code and having a peer-review approach is especially important in partnership with national-level institutions.

One of the ways they have leveraged their technology has been with the Ethiopian Ministry of Education. This partnership allows more than 5 million students to preserve their education records.

These students are able to access their documents anywhere, at any time.

Furthermore, with a diverse number of Blockchain Research Hubs sponsored by IOHK, the use cases of the Cardano blockchain are just beginning.

Cascading Disruption – One Upgrade At A Time

As part of IOHK’s goal of “identifying and developing technology” to push towards a more fair and transparent order, they have announced the Vasil upgrade.

The latest in a series of hard forks, Vasil plans to upgrade scalability and performance on the Cardano Network.

Block propagation times will also decrease across the network, increasing throughput and performance.

With more than 1000 dAPPS currently running on Cardano, the upgrade will help the network run smoother than ever.

The network is also growing at an alarming pace, with 4 million $ADA worth of NFTs being bought and sold in the last seven days.

“A year ago, there wasn’t even a smart contract language“

On-chain Total Value Locked has also grown from 0 to approximately $90 million since the start of this year.

Building on strong fundamentals, he also notes that their “community is growing“, reflected in the strong discussions happening on Cardano forums.

Building For The Future Of Web3.0

Within the short history of crypto, projects have come and gone like season. From “blue-chip” protocols to the “future of finance”, such labels often get imprinted in manic phases.

“It’s a long process to build an ecosystem“

As Cardano continues to develop it’s robust network, Pellerin urges developers to “challenge themselves with experts, audits“. He also reminds builders that “hard work on your project fundamentals usually pays off”, and to not be so fixated on volatility.

Concerning the future of blockchain technology, Pellerin notes that the path is bright, and Cardano has a pivotal role to play.

“The world is transforming technology, not the other way around“

He recalls the time when he migrated to the United States, and lost his financial history. Even when sending money back home, traditional systems take up to 5 days with high fees, compared to 2 minutes on the blockchain.

“Blockchains are the future” he states, highlighting its ability to disrupt global transactions while broadening financial inclusion.

With Cardano’s strong fundamentals and robust systems, IOHK seems primed to leverage their technologies to enter not just Web2.0, but the world at large.

Also Read: “We Needed To Break Down The Barriers” – UNTAM3D On Empowering Women+ In Web3.0