Is Maple Finance In A Sticky Situation? Why We Need To Rethink Unbacked Lending 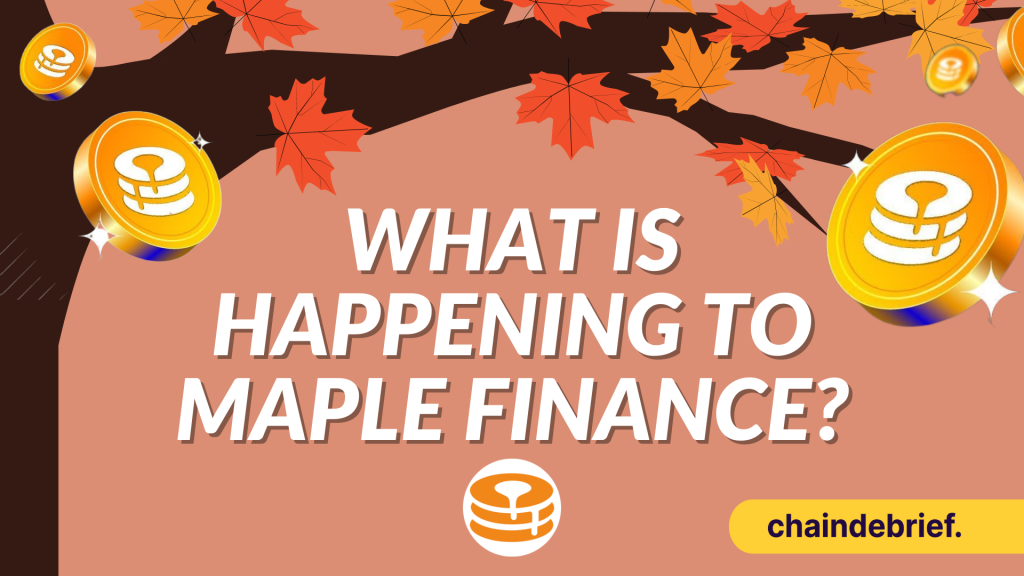 You might have heard it by now; the non-custodial lending protocol Maple Finance found itself in a sticky situation after cutting ties with Orthogonal trading after the latter defaulted on $36M of loans.

This is another case of contagion caused by the recent bankruptcy of FTX. This default affected some 30% of active loans on the protocol, and in response, Maple has cut all ties with Orthogonal trading.

It is good to know that Orthogonal has two business arms previously associated with Maple, credit and trading.

A point to note is that Orthogonal credit, a pool delegate is not the bad guy in this story, Maple mentioned the Orthogonal credit arm operates separately from Orthogonal trading and added that the “credit team has acted with integrity and professionalism and is seeking strategic solutions as an independent entity.”

Pool delegate – Responsible for negotiating loan terms with borrowers, performing diligence, and liquidating collateral in the event of a default. Pool Delegates review a Borrower’s reputation, expertise, and performance to evaluate the terms of the loan.

That leaves us with the bad actor, Orthogonal trading.

“It is now clear that they (Orthogonal trading) have been operating while effectively insolvent, and it will not be possible for them to continue operating a trading business without outside investment.” The team at Maple further added that they would not work with bad actors or firms that misrepresent their financials or business operations.

How did they get themselves here?

Orthogonal trading borrowed from two maple lending pools, one managed by Orthogonal credit and the other by M11 credit, a subsidiary of a Dutch investment firm, Maven 11.

According to M11, they reached out to the borrowers after the collapse of FTX to “confirm their financial situation to protect the interest of the pool liquidity providers as much as possible.”

However, Orthogonal trading repeatedly stated that they had limited exposure to FTX, but now, M11 and Maple have reason to believe those statements were lies.

Despite its recent payment, Orthogonal trading on Saturday told M11 that it had “incurred much larger losses than previously disclosed.”

On Sunday, Orthogonal Trading missed a $10M payment and M11, issued a notice for default for all of Orthogonal’s active loans. Furthermore, “all appropriate legal avenues to recover funds will be pursued, including arbitration or litigation as necessary.”

This means that M11 is accusing Orthogonal trading of lying about its financial situation with the collapse of FTX and added Orthogonal attempted to recover losses through further trading.

Whatever the case, Orthogonal is rekted.

This led to large holders selling the native Maple coin.

Why we should have more on-chain collateral

Returning to the basics of collateralising lending involves putting together something of value in exchange for the right to borrow.

When the borrower can’t repay, the lender liquidates the collateral.

On the flip side, undercollateralized or unsecured lending is you lending money to me, and when I don’t give it back, there is no immediate asset I can sell to recover my loss. Dangerous waters, and it is not a real thing.

“Recovery in real-world lending markets always relies on either collateral or recourse, but ideally both:”

When you think of taking a housing loan or buying a new car, they both fall in the category of collateral; the home you buy/the vehicle you own, and there is also a recourse when you fail to pay – which may be in the form of clawback of property or “force” selling the car.

However, in crypto, there is no “recourse” layer because the code only relies on the rights and payments. That leaves lenders with one aspect, collateral.

While this might be great for borrowers, it’s horrible for lenders: Lenders have no recourse if customers don’t repay their loans.

What needs to be done is normalising and creating digital-native markets where assets can be more ready to be collateralized. Examples could include gaming inventory, NFTs, subscriptions and many more rather than continuing the path towards unbacked lending.