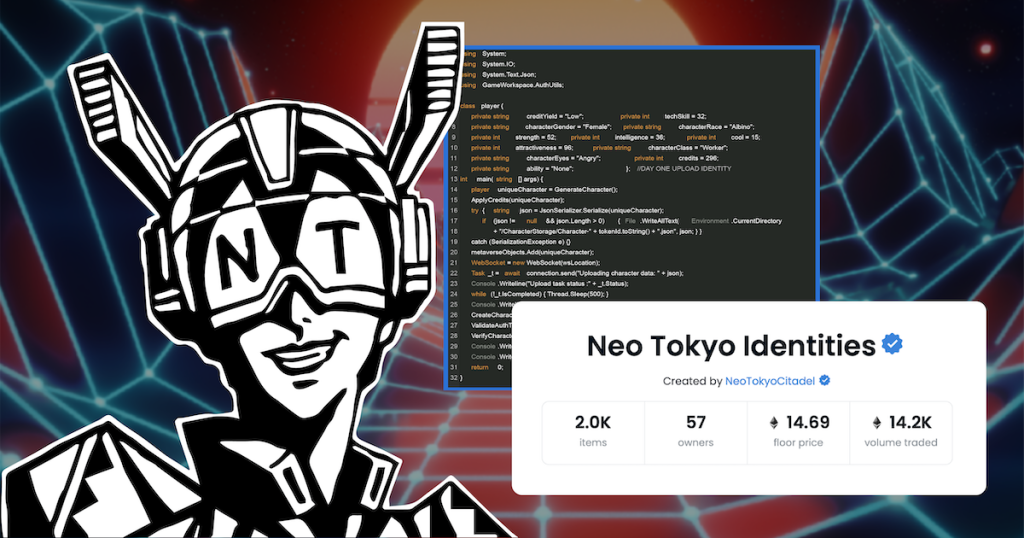 Well-known crypto YouTubers, Alex Becker and Elliotrades devised the idea of the Neo Tokyo Identities NFT. Launched in October 2021, these NFTs already have over a million subscribers.

Along with his work on the Neo Tokyo Identities NFT and game project, Alex Becker has developed several other businesses. A large portion of his earnings comes from his digital marketing firms.

These include Source Wave, Market Hero, and Hyros, which all produce millions of dollars.

Becker served in the Army Air Corps before embarking on his entrepreneurial journey. Becker, born in 1988, had a net worth of over US$1 million when he was only 24 years old. According to estimates, he’s now a multimillionaire, with an estimated net worth of more than US$10 million.

Neo Tokyo is an anime masterpiece released in 1987. The movie takes place in a dystopian city, and comprises of three 50-minute stories which were written and directed by a different person.

There are no apparent links between the NFT collection and the movie, although it was influenced by it. All the NFTs are is a collection of textual data on numerous facets.

A total of 2,018 identities and 2,500 vault cards are included in the Neo Tokyo Identities collection. It is claimed to be “the fairest NFT drop in history,” according to Becker.

Among its advantages are that there were no pre-sales, it was a free mint, and that Becker and Elliotrades each possess just one NFT.

The goal was to create a project focused on the community’s needs, fostering a “culture of long-term engagement.”

All of the benefits will accrue to “Citizens” engaged and “pay attention” to all notifications. Even “games inside games inside the codes” are designed to “root out” passive holders.

There are four sections to the Neo Tokyo NFT Collection:

As shown in the game, Neo Tokyo Identities are the characters’ real-life identities. These characters may be either men or women, and they can belong to a variety of different classes such as ‘helper’ or ‘club owner.’

They can also have distinct file text colors such as white, green, blue, and so on and a variety of other traits and abilities.

Cards in the Neo Tokyo Vault system are similar to bank accounts, complete with credit ratings, enhanced supply items, and a part of the game’s wealth held.

Clothing, autos, helms, and weapons may all be discovered in Neo Tokyo Item Caches, as well as other items.

According to the map, Neo Tokyo Land Deeds appear to be little more than pieces of land dispersed over the map in various communities. Other virtual land collections, such as Decentraland, have witnessed insanely substantial growth in the value of their virtual land.

Getting your hands on an NFT for your collection is no simple task. Only individuals who were on Neo Tokyo’s whitelist were permitted to mint the NFTs.

Furthermore, only individuals who successfully answered the puzzles or won games were included in the whitelist, compiled on a first-come, first-served basis.

Becker then distributed whitelists in groups on Upload Day (October 3), giving each group 10 minutes to create Neo Tokyo Identities before the next group dropped theirs.

Verification (codes) and mint numbers relating to each wallet address were included in the lists of information. This, though, did not ensure that a mint would be found. Users were required to visit the website and “pass” yet another test.

According to Dave Loyal, users could communicate with one another using a chatbox on the Neo Tokyo Identities website on Upload Day.

They were then given a series of questions, the solutions to which could be found in the many clues and codes that Becker had previously posted on Twitter. Users were given Etherscan addresses and contract links at the conclusion of the questions, where they were required to submit their whitelist number and proof of ownership in order to mint the NFTs.

Moreover, on October 16, the team shared a link to the contract for mint vault cards on their website. The procedure remained the same as previously, with each Neo Tokyo cardholder receiving two hours to take advantage of a single vault pick.

However, if the vault holders do not arrive in time, game-winners on the whitelist may “take” the vault from the holders.

The NFTs are now selling on the secondary market with a floor price of around 14.69 ETH.

The process of creating Neo Tokyo NFTs involves first passing a test in order to be included in a whitelist, and NFTs appear as codes that transform into avatars after they are uploaded.

The Neo Tokyo NFT project aims to create a network that will reward its members in the long run by providing them with the option to generate passive money while also providing them with extra privileges. A project of the NFT is a Neo Tokyo metaverse game in which NFT avatars play the roles of fictional characters. Aside from that, the project will make investments in cryptocurrency games and provide its members with early access to these games.

Because investors perceive them as a way to create passive income while also gaining exposure to the metaverse, the valuation of Neo Tokyo NFTs has skyrocketed.

In addition to Facebook parent Meta Platforms, a large number of other corporations are investing extensively in the development of the metaverse, which is predicted to have a larger economy than the physical world in the near future.

Looking at the existing situation, any investment in the Neo Tokyo Identities NFT Series or other Metaverses may prove to be a wise decision.

There is a lot of enthusiasm about Neo Tokyo and all of the things we already know about it, but there is so much more that has yet to be released that will be shared with the community on a regular basis.