To Stake Or To LP LUNA? Prism Protocol Allows You To Do Both Concurrently 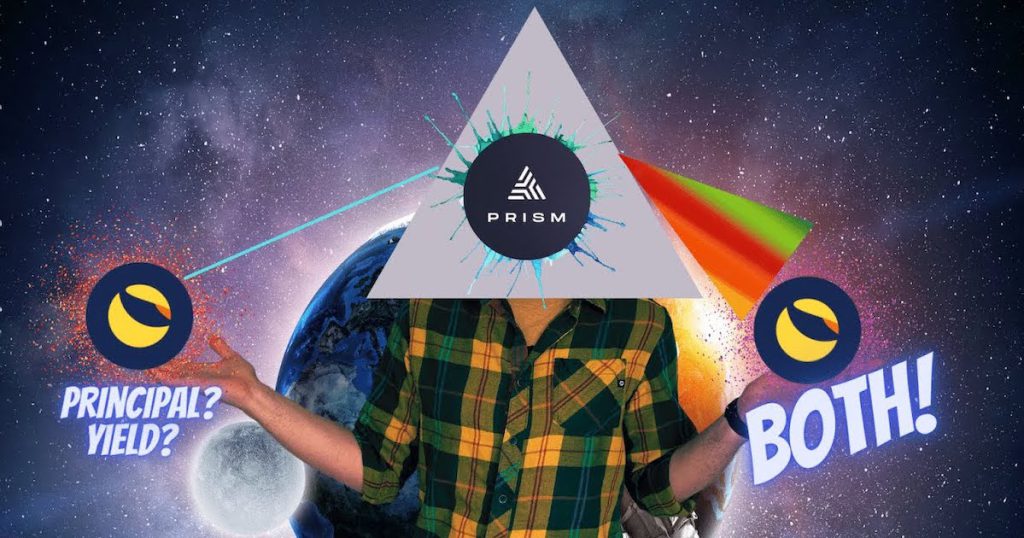 To date, Prism protocol is the most advanced protocol that I have tried to understand and write about. Reading the litepaper initially left me with plenty of questions.

However, after digging deeper, I now have a better idea of what it is and how much of a difference it could make for LUNA holders and the wider ecosystem.

At its core, Prism aims to break up, what they call refract, LUNA into two distinct components. This will see LUNA become yLUNA (the yield component) and pLUNA (the principal component).

Currently, we can only perform one action at a time using 1 LUNA: either stake (yield) or put up as collateral to borrow (principal) as an example. But Prism will allow us to do both, at the same time!

At the end of the day, Prism aims to increase efficiency in terms of earning yield on Yield Bearing Assets (YBA), such as LUNA.

This also resolves the issue of inaccessibility to liquidity when the asset is staked or the risk of liquidation when using the asset as collateral.

The table above sums up the flexibility of Prism allowing the user to get the best of both worlds. Sounds great? Let’s see how this will work out in practice.

To begin, a user will deposit LUNA into Prism which will become known as a collateral token (CT). Prism will then automatically refract the CT into pLUNA and yLUNA.

The user can stake yLUNA to earn staking rewards such as airdrops while using pLUNA to exercise governance voting rights or even provide liquidity.

So now the question is what will be the ratio of pLUNA and yLUNA to make up 1 LUNA?

This will largely be determined by market forces once Prism goes live. But what is certain is that pLUNA will always trade at a discount to LUNA as long as yLUNA holds value.

In the case of a perpetual contract (ie depositing LUNA into prism with no maturity) this will always hold true.

Diving deeper, we recognize that the prices of pLUNA and yLUNA will not be the same.

As such, pLUNA’s value will be affected by the price of yLUNA as well apart from market forces. Thus, the higher the value of yLUNA, the lower the value of pLUNA since an efficient market necessitates that both adds up to 1 LUNA.

For the context of this article, we will be referencing perpetual contracts only. Fixed-term contracts are more complicated in the way they will be priced due to them having a maturity factor.

However, the aim of this article is to explain the broad purpose and utility of this protocol and how a user with a non-finance background can still garner alpha through using this protocol. If you are interested to find out more on how pLUNA and yLUNA are priced, do check out this awesome thread where the writer goes into the nitty-gritty details.

Alright, enough of the technicalities and more on how we can utilize prism to increase the efficiency of our yields.

The most fundamental use case will be the ability to earn yields on both ends. Currently, a user would have to choose between earning staking rewards and airdrops or fees by providing liquidity.

This is an issue for smallholders especially, because staking too small an amount would negate the returns in the form of airdrops. But with the ability to earn both at once, there will no longer be this dilemma. It is truly, yield upon yield. This will look like something in the image below.

However, one point to note is that if you are concerned about the decentralization of the network, then it might be better to stake with Stader or your own choice of validator.

Stader is an upcoming protocol that aims to resolve the inefficiencies of traditional staking while maintaining decentralization of the network.

From what I know, Prism has not mentioned how it will allocate deposited LUNA to be staked. Resultingly, this could affect the concentration of voting power negatively, should Prism stake all deposited LUNA under a single validator.

The ability to do two things at once is great. But it’ll be even better if it could be done across protocols. Being able to utilize your funds across protocols just opens up so many doors. Think about how we can use the UST deposited into Anchor Earn (aUST) to short farm on Mirror.

To illustrate, let’s look at a confirmed collaboration between Prism and Pylon.

A quick recap of how Pylon pools currently work: A user will deposit a certain amount of UST into a project of their choice on Pylon Gateway. Pylon then deposits the UST into Anchor Earn to earn the 19.5%~ yields.

This yield from Anchor Earn is then used to purchase the tokens of the pool, for example, MINE tokens in the MINE pool. In this lossless investment strategy, Pylon only requires the yield generated from UST.

At the end of the vesting period, the deposited amount of UST can be withdrawn in full.

With Prism, the user will now be able to deposit yLUNA instead of UST.

This frees up pLUNA for other use cases as mentioned above. Now, isn’t this efficient! This is just one such example of potential collaborations to come. With so many protocols yet to launch, I’m excited to see what new collaborations will take place.

Lastly, you might be wondering what’s the point of using Prism to earn both kinds of rewards (ie. staking and LP fees). Technically, if you had 100 LUNA, you could split it in half and allocate each half accordingly, right?

Well yes, but doing so on Prism allows you to leverage your LUNA without being exposed to liquidation risk. For example, a user who deposited his LUNA could sell all his pLUNA and use the proceeds to buy more yLUNA.

This gives the user a leveraged exposure to staking rewards and airdrops with no risk of liquidation. As a result, this tactic allows the user to take a bet on the side where he is more bullish without additional downside risk.

At present, Prism is working on the Terra ecosystem and the first YBA it will accept is LUNA. But in time to come, they will expand to other PoS networks and begin to accept other YBA such as SOL, ATOM, and DOT. I believe aUST is also in the works. This could be in the form of using yaUST to earn the 19.5%~ while allowing for paUST to be paired in other liquidity pools.

Apart from the use cases mentioned above, there are other more technical and complex financial strategies that users can employ. This includes strategies such as interest rate swaps and speculation on YT or PT prices.

Prism has been one of the protocols that I have spent the most time researching on. Even then, I think I’ve barely scratched the surface of understanding its true potential and reach.

Certain concepts might still be fuzzy, but all will be clear when Prism launches allowing us to see how the market prices yLUNA and pLUNA. What is for certain is that Prism will enable YBA to be utilized even more efficiently. I foresee that this could become a new standard for all PoS tokens.