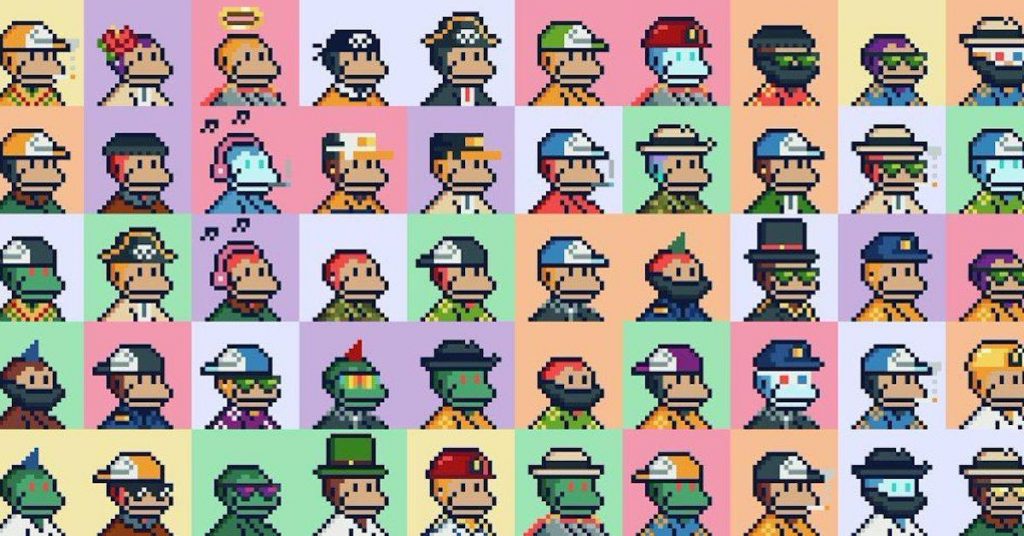 Solana’s NFTs have been on a rise, especially with its low gas fees and strong communities formed from the OG NFT projects on Solana.

On Ethereum, gas wars occur and very often, only whales control the initial supply of NFTs. However, due to Solana’s low gas fee and speeds, distribution has been quite fair across most of Solana’s NFT projects.

Thus, a lot of NFT projects chose to launch on Solana instead, with Degen Ape Academy (DAA) and Solana Monkey Business (SMB) being the two strong ones surrounded by countless others.

Solana Monkey Business (SMB) and Degen Apes Academy (DAA) performed the best with them being the OG projects on Solana, starting at 2 SOL and 6 SOL respectively at mint and eventually reached a floor of 70sol and 100 sol for the most basic NFT models.

They have both proven to be strong contenders with communities that have some form of gated exclusivity for owners and actively known to be a great place to network with others.

With its own marketplace, MBS controls the revenue instead of relying on a 3rd party marketplace. Furthermore, 3% of the initial mint will be placed into a treasury wallet, governed by the NFT holders and used to secure and vote on Solana’s future.

This gives the NFT value through governance as holders have the right on how to distribute the treasury.

Blockchain advisory firm Moonrock Capital made the news earlier in September with his purchase of a Degenerate Ape Academy NFT for 5,980 SOL on Saturday, worth $1.1 million at that time.

Degen Apes’ Roadmap shows they have plans to create a gated community, only accessible to holders of a DAA NFT. This hints to things like a “Academy of Apes”, to create a closed and privileged community of apes, one that will justify their high-ticket entry price.

Solana’s NFT scene is dominated by a few marketplaces, such as Solanart and DigitalEyes, with new competitors to the market like SolSea and Magic Eden.

Each marketplace works out partnerships with different collections and listings have been quite “centralised” as they are curated projects that the marketplace approves. Solanart has many collections within their marketplace with top projects like Degen Apes Academy having the most volume in trading.

It will be interesting to note that platforms like DigitalEyes offer all collections to list without any form of exclusivity, but this also leads to a slightly higher possibility that buyers might purchase scam listings as there are no prior approvals by the team for the listings on site.

Solana NFT launchpads collect fees from the collections that they list, which makes them quite a lucrative business. Some marketplaces like Magic Eden did try to do away with listing fees, but still struggle to gain traction in luring NFT projects on Solana to list with them due to a lack of user base and community strength.

NFT collections do generate significant trading volume on secondary markets, which is why some projects took it into their own hands. SolanaMBS created their own marketplace, and controls all sales of their NFTs through it, giving rise to a powerhouse NFT collection and trading market.

The Launch Pads for NFTs – creating the next wave of demand

Launching a hyped NFT isn’t easy, with many collections suffering from bad news or delayed drops, causing the general floor price to crash, and collectors to lose their NFT investment.

The infrastructure required to orchestrate a good launch can be quite taxing for a new NFT project, and other mature players like Solanium and Raydium have stepped up to fulfill this gap.

Degenerate Apes had multiple delays and a failed launch as the demand outpaced their UI capacities while projects like Aurory Finance messed up the minting price, collecting 1 sol instead of 3 sol for their setup.

Solanium launched its NFT Launchpad by conducting the Flippies NFT drop earlier in September, using their proven model of launching new tokens to launch NFTs instead.

Tiers 1-3 got a lottery draw, while Tiers 4-5 got a guaranteed allocation of NFTs. Repeated rounds were used, ending with a FCFS round to make sure that all 10,000 NFTs were snapped up at a mint price of 4 SOL.

On the other hand, Raydium adapted their Accelerator to create the NFT Drop zone. Users can deposit SOL just like how they deposited USDC for normal IDO allocations and get a chance to withdraw NFTs instead of their SOL back.

Something worth noting about Raydium’s NFT drops is that one could sell the winning ticket to the NFT to others, through a tokenised “dropbox” that could be traded or sold to each other.

This token would then be used to claim the NFT, which will then mint at randomness. This, combined with Raydium’s infrastructure led to a smooth and effective launch, as well as boosted floor price of the NFT drop as they were traded with speculation as those who owned it prior to minting and reveal could possibly sell their “guaranteed nft” away.

These launchpads might create the next wave in launching NFTs, judging by how they have the infrastructure with their deployed RPC nodes, along with a huge user base that they have built in the past year of their launchpad operations.

With both Solanium and Raydium launching their first ever NFT drop, it will be exciting to see how trading volumes of NFTs in the Solana ecosystem would develop with this wave of NFT drops compares to that of its competing chains like Ethereum or Binance Smart Chain.

Also Read: All About Altura – The Next Generation Gaming NFT Platform That Is Introducing “Smart NFTs”