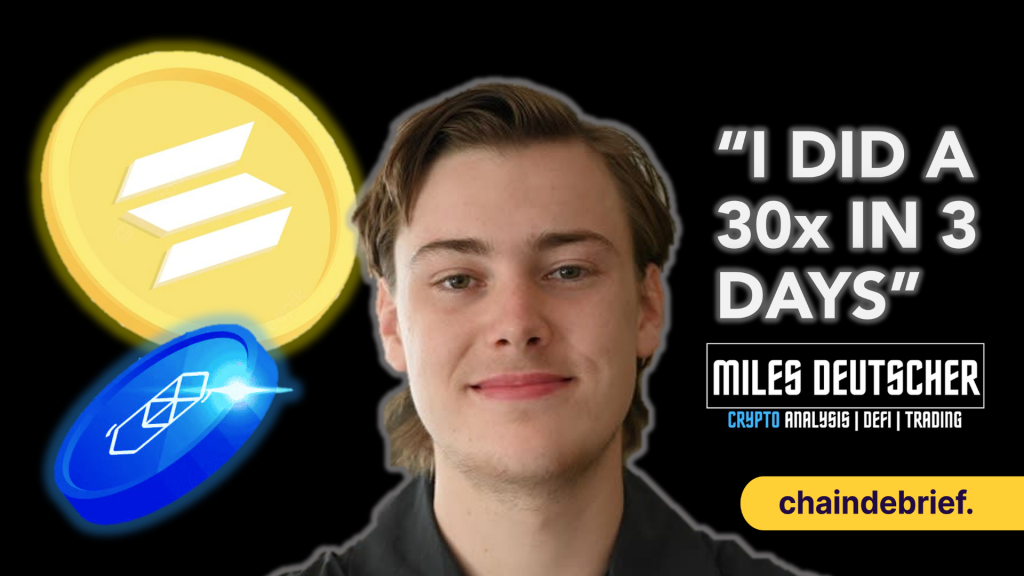 How did he get into crypto?

The prominent figure on Twitter and Crypto Banter Host, Miles Deutscher, got into the space in not the usual fashion during the bull, but instead during the chills of the bear market in 2019.

If you entered crypto one year ago your portfolio right now might not be in the best shape. Mile’s year crypto journey was a little different, entering Bitcoin around the three to four thousand range and accumulating Ethereum a little after.

“DeFi summer piqued my interest in crypto” and after holding coins in the stagnant wallet for a year, the DeFi boom was a key event which showed him how coins are feasible alternatives in making them work for you.

The nomad bridge allows users to exchange tokens across different chains. Hackers found an exploit in the recent update by changing lines of code and drained what is known to be the 4th largest exploit to date.

Is there a future for bridges?

The founder of Ethereum, Vitalk, warned of the dangers of a cross-chain future instead of a multi-chain one. Almost a “prophetic” statement because ever since then, we’ve seen 3 of the biggest bridge exploits in the history of crypto (Ronin, Wormhole etc).

However, bridges may still be a necessary piece of infrastructure within the world of crypto, especially in assets with features of custodial swapping (Thorchain) and interoperable systems.

The future will be multi-chain, but along the way, we are going to need these core pieces of infrastructure to allow communication between the ecosystems. Bridges are still essential.

Also Read: Nomad Bridge Hacked For $190M – When Will The Exploits Stop?

Cosmos’s SDK is one of the best in crypto. Many build there. But the ATOM token and the greater cosmos ecosystem operates in varying function(ish). The primary value accrual for the ATOM token comes mainly from airdrops, which may be a bore during any bear markets.

Polkadot however accrues value in a different way in how it operates as a layer zero. The native token for Polkadot, $DOT, powers the Parachains and the entire ecosystem benefits along with it.

Also Read: Polkadot vs. Cosmos: Who’s Winning The Race Towards The Multi-Chain Future?

We will see an interoperable future, it just is a matter of time. Alot of people are missing on the fact that the last bull run is driven a lot by hype and speculation, projects like DOT are known for its interoperability but it didn’t play out as planned because it just wasn’t ready for the masses yet.

“Rune has the most upside in pure percentage stats, DOT is the best risk to reward play and Cosmos is best for the developers.”

Also Read: All You Need To Know About $RUNE: How THORChain Will Disrupt Centralized Exchanges

With the multiple outages and the recent hack, it is still a top token to accumulate in the bear market. They are valid concerns for those who don’t want in but if you scope out to see ahead in the next 5 years, it may be a valid option based on it’s network effect.

The user base, loyalty and transaction volume on Solana continue to exhibit growth even in the bear. It is difficult to deny on-chain data, those data cannot be ignored.

Solana still remains to be a strong competitor in the NFT space, along with a decent DeFi ecosystem, and also being highly scalable. It is not the most decentralized, but some argue that decentralization cannot be achieved in the short term without centralization.

The path it takes in towards decentralized is more important right now, in Solana’s case, it will get there with the network effect and the great ability to scale.

Rising concerns about the marketing approach as well as the lack of VC backing are the main factors which came to full effect during the bear market.

Although layer1 strayed away from VC backing, “I can tell you right now that they do because that is what is going to drive the ecosystem forward through grants and development incentives.”

However there are some big things in the works, and it is looking more positive in the coming months.

The Andre situation is widely misunderstood, the man hadn’t actually contributed to the main source code or any middleware development since 2019.

Every single development that’s happened since then has obviously been from the current CEO, Micheal Kong and Andre’s FUSD commitment might just reflect his involvement in an advisory role but not as active in building as he used to be.

Especially after Solidity, which hit a high of $2.5B in its first week, turned into a huge obligation to retailers who invested in it, Andre left the scenes and only operates in the dark now. “Andre loves to code but I don’t think he likes being in the spotlight.”

Also Read: Will Andre Cronje Bring Fantom Back From The Dead?

Stablecoins is a way to go and the sentiments of the market definitely shifted the investing mindset to more of a risk-off one. However, his strategy hasn’t changed much since January/February, which is to accumulate quality projects.

“My crypto holdings never eclipsed more than 40% of my net worth.” The other 60% includes real estate, a solid share portfolio and business ventures. There was enough protection to sustain through the bear market and what’s left is waiting for the right time to deploy.

So have we bottomed?

We have not seen the bottom, but the local bottom is never clearer due to the unprecedented liquidations over the last few weeks.

There is no reason for a temporary bull rally for BTC to the 30/35/40K vicinity and seeing the bottom again, poses a great opportunity for traders. “People are so quick to assume that there are new lows that they forget that new local highs are equally as possible in this market.”

In the meantime, we are in the accumulation range, especially for Ethereum, SOL and FTM and not some crazy allocation of anything with a sub 100M market cap. Make it clear which are your HODL bags and your trading bags.

There are theories circulating that it is highly likely of the Ethereum fork with the miners if most of the projects decide to stay on the original Ethereum.

If you’re a project and you don’t like PoS, you basically have two choices, potentially band together to stay in PoW or make the shift to Ethereum Classic.

Eth classic might not be viable in the long-term, but more of a play to hedge.

It is a decent bet leading up to the merge, imagine two scenarios (1) ETH pumps entering the merge, the likelihood of classic to pump is likely as they are banded through the Ethereum ecosystem. (2) If the merge fails or gets delayed, there’s still the same growth potential coming from Ethereum Classic.

Almost like a win-win in the short term regardless of which scenario plays out.

However, a lot of the things that we’re seeing pump on the day are now pumping a month ahead so there is a slight fear that this growth from the merge is temporarily priced in, but this might be a completely different discussion in long term.

“Gaming and NFTs are the most obvious way to onboard retail users.”

At the end of the day, it’s about users and future adopters. Users will trend towards platforms that are the most effective at onboarding them, as we see a glimpse in Terra’s UST and 20% rewards of Anchor, gaming is going to be next.

It is the biggest entertainment industry in real life and it only makes sense that people want to keep custody of their assets. Not necessarily play to earn, which might not work in its current form, but more so of being to own assets and trade them freely on the metaverse etc.

Also Read: Why Do Gamers Hate NFTs? Are NFTs Out To Extort Gamers Or Liberate Them?

Are we still early?

“We are a lot earlier than we think, but we are a lot later than some people think.”

There are certain narratives which overplayed their hands, while certain tokens in the market are certainly not early to, and there are others where people just seem to discount all that growth.

The report based on users and exchange users suggests that based on the current model and the current growth rate tracked on a parabola we are currently in 1993/1998 of the internet.

40 bands snapped into 2 grand during the NFT boom.

Check out the entire recording of the Twitter spaces we had with Miles Deutscher below.