What Do Bear Market Mergers & Acquisitions Really Mean For Crypto? 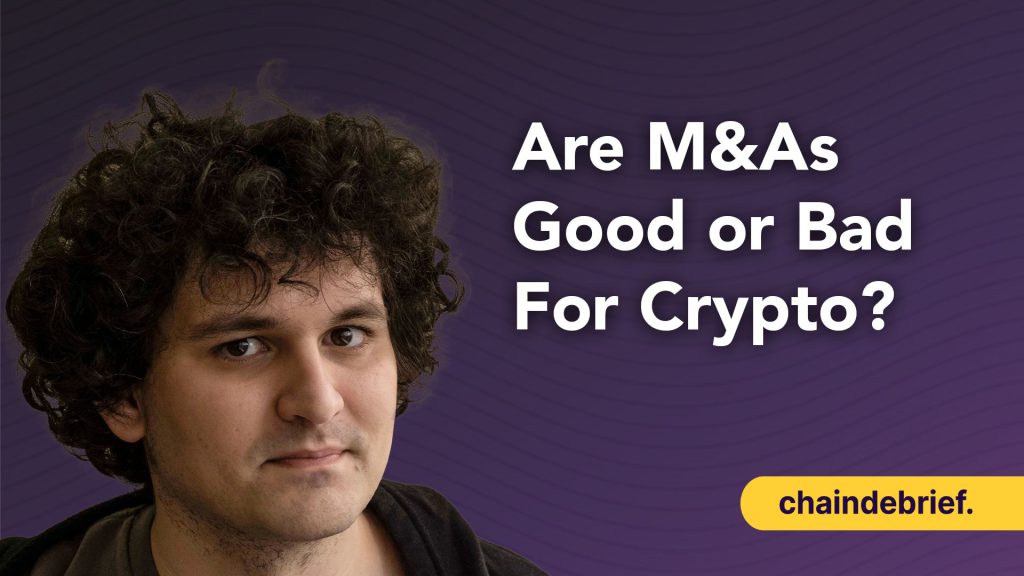 Profit drives capitalism, and to get profit, companies either increase their top line or reduce their bottom line. Many larger companies turn to M&As (Mergers and Acquisitions) to give them greater market share and cost synergy.

Although crypto is still a relatively young industry, M&A activity is already booming, with average deal sizes hitting almost US$180 million in 2021 and global deal value reaching about $8 billion in 2021 according to a PWC report. And it’s not just M&As between crypto companies; Tradfi companies also want in on the action.

The Merger and Acquisition Trade

The most common types of M&A seen in crypto are horizontal or market-extension acquisitions whereby companies join forces to gain more market share or expand geographical market reach, such as Coinsquare’s acquisition of Canadian digital asset brokerage Coinsmart, or WonderFi’s acquisition of BitBuy.

M&A activity is cyclical by nature and closely follows the economy. In a typical M&A cycle, deal volumes and values decline in line with economic downturns as companies hesitate to proceed with an M&A as they are afraid to overextend their company during a weak economy.

As we are still in the crypto winter, M&A deal-making in the space has also reached a standstill, with deals being called off or postponed such as Bolt dropping plans to acquire Wyre.

The type of M&As that happen during economic downturns can also be pretty subjective. On the one hand, it’s a prime time for large, cash-rich companies like FTX to start swooping up companies at a discount and looking for strategic plays in the market to expand their presence. On the other hand, companies that fail to pull through the winter are knocking on investors’ doors hoping for a bail-out.

Strategic acquisitions or mergers allow crypto companies to gain more market presence, acquire new technology or IP, the target company’s user base, and at the same time, eliminate potential competition. The real value from M&As comes in revenue and cost synergies, which ultimately affect the top and bottom line.

Strategic acquisitions or mergers allow crypto companies to gain more market presence, acquire new technology or IP, the target company’s user base, and at the same time, eliminate potential competition. The real value from M&As comes in revenue and cost synergies, which ultimately affect the top and bottom line.

If we take a look at the Bolt Financial and Wyre example, it’s a good example of revenue synergies. Wyre is a leading crypto payment infrastructure with on/off ramp capabilities while Bolt Financial is a software development company primarily in the eCommerce space, offering one-click checkouts with traditional payment infrastructure. You can sort of see the picture – Wyre’s crypto payment capabilities integrating into Bolt’s eCommerce checkout solution.

Distressed M&As however, involve a company in financial distress which often happens in an economic downturn. Taking a look at the crypto winter alone, large billion-dollar companies that nobody thought would fail, are going under.

Why would anyone buy a financially distressed company?

In terms of risk-reward dynamics, buying out a distressed company presents a high-risk high-reward scenario. These acquiring companies typically have huge in-house capabilities to potentially rejuvenate the company, or provide an exit for its customers while at the same time buying over company IP or data. Voyager being bought out by FTX is one such example.

In a recent auction, FTX won with a bid of US$1.4 Billion to acquire Voyager, which could see its customers recouping their losses back when Voyager filed for Chapter 11 Bankruptcy in July. This purchase agreement will be presented for approval in court on October 19 and customers would be able to transfer to the FTX US platform.

This buyout sees FTX acquiring 3.5 million of Voyager’s customers, of which 1.19 million had actively funded accounts.

And despite the large US$1.4 Billion sum, the buyout only values Voyager’s non-crypto assets, Intellectual property, and user base at US$51 million. US$60 million is going towards a literal “poaching program”, offering each Voyager customer a $50 account credit if they successfully onboard with FTX. The remaining US$1.3 Billion goes towards buying up the crypto holdings.

Earlier in June, FTX bailed out BlockFi by offering a credit line of US$400 million, and with that an option to buy out the entire company for up to US$240 million (although rumors were going around saying FTX could buy them out for US$15 million).

Several factors were in place however, that would bump up the buyout price for BlockFi:

Regulatory clearance from the SEC – FTX would pay an additional $25 million if BlockFi gets SEC approval for their lending product which they were fined for initially.

BlockFi client assets reaching $10 billion –  FTX would pay a sum equal to a quarter of BlockFi’s operating revenue, up to a maximum of $100 million.

Needless to say, being a cash-rich giant in a time of economic downturn is a good time for strategic M&As.

Since the industry is relatively young, there are no precedent transactions to compare crypto company valuations against and no industry standard for valuing crypto companies, as traditional DCF models are not applicable to most cryptocurrencies. As a result, acquiring companies are shifting towards Defi metrics such as the token economics of a project (inflation, supply, burn rates), or metrics like usage value which primarily applies to utility tokens.

How about NFT projects? You might have seen Yuga Labs’ crazy valuation of $4 billion. Well, for a project like BAYC, it is easier to value compared to newer NFT projects due to its slightly longer track record, obvious demand, and hype around it. But when valuing newer NFT projects, qualitative metrics like team dynamics, expertise, or community size seem to weigh heavier than quantitative ones like the profitability of the project or volume.

Needless to say, the industry being in its nascent stages brings about both challenges and huge upsides when it comes to M&A. From an acquirers standpoint, there are no concrete quantitative metrics to value a project, and acquisitions in the bear market could also be a gamble or a huge discount depending on who the acquirer is. But, once the winter ends, these strategic acquisitions could bring tremendous growth

Also Read: Liz Truss Has Resigned From Office – Here’s What It Means For Crypto