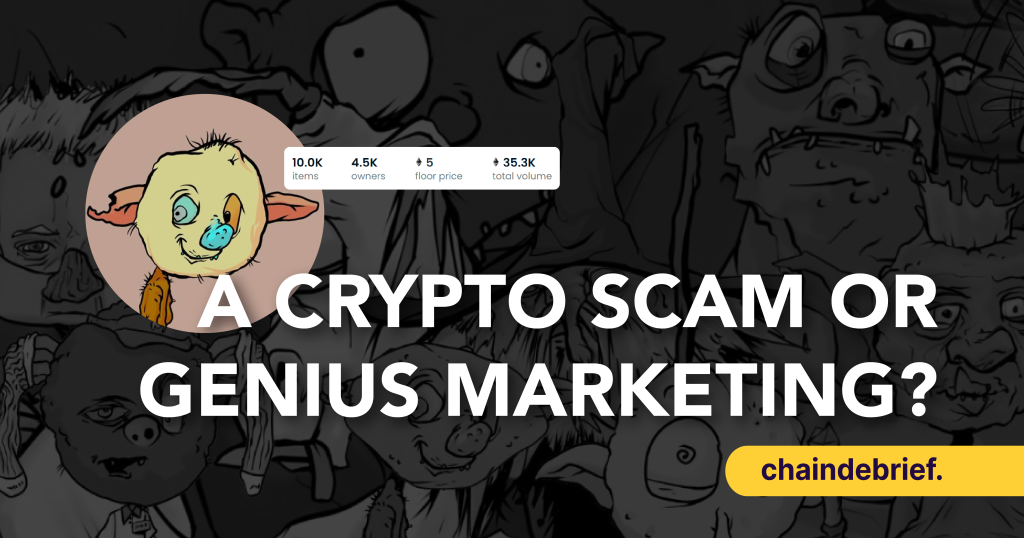 Despite a bear market, one mysterious NFT collection took over the NFT world by storm.

And yet this big meme was so successful that a Goblin’s floor price hit 7.35 ETH at ATH (now at ~4 ETH) with an overall volume of ~32k ETH traded.

Even nifty NFT investors are struggling to understand how such a project manage to take off. Many surround the project, from claims that this is a secret project by Yuga Labs of BAYC fame, to Gary Vaynerchuk’s rumoured involvement…

Was it just a lightning in the bottle moment? What does this reflect for the NFT and crypto space as a whole? Goblintown may reflect some very strong lessons for investors in the space.

Rethink Your Idea Of Fundamentals

Why does anyone really want to own NFTs? What is the importance of it?

The “classic” interpretation is that Web 3.0 is of course, revolutionary and that most of the infrastructure and ecosystem is decentralized.

Therefore it is much better for the individual compared to ‘Big Tech’. We see this example in the case of ownership of an NFT. Why not just right click and save the image, right?

Yeah, but you wouldn’t be able to own the asset on-chain, and neither can you trade it or have ownership rights/benefits decided by the protocol.

But yet, nobody really cares about this stuff, does it?

Let’s take a look – apparently 82% of NFT buyers surveyed were motivated by… investment purposes (a.k.a not in it for the tech).

In truth, most of us in the space are motivated not by ideals, but simply by earning profit. In fact the popular saying in crypto goes,

It is not a surprise that those in the crypto space, and even “OG traders” also tend to have history in poker – that’s right, some of the best in the space often use poker analogies and teach concepts like sizing bets, EV, and probabilistic thinking to earn as much money as possible in DeFi, NFTs, L1s etc.

So while people may be curious, puzzled, or even upset at not buying Goblins early, I think that it doesn’t really matter. This is a clown market, valuations are absurd, and people take buying/selling advice from random people with anonymous profile pictures on Twitter, or listen to some one unironically called BitBoy on crypto…

But what really gave Goblintown its viral moment?

In this case, consider the psychological perspective of an investor in a bear market, or as crypto slang goes, goblin town.

Your alts are down horribly. Your NFT floor prices are falling. The major blue chips you are holding are also not doing well. Or even worse, you could have been part of the LUNA collapse.

Not fun, isn’t it? Now, enter a project that does the following:

GoblinTown pokes fun at itself for being “useless”. Why would anyone buy a useless asset in the bear market? But think about it this way.

Since I and everyone else around me are losing money, why not make a big joke out of it?

Humour does serve as an effective coping mechanism for many – just see our Instagram memes!

Nobody knows who the devs of Goblintown are, and rumours only fueled the narrative. Was it Gary Vaynerchuck? Yuga Labs? Mysterious whales? Or just a viral moment? A sense of mystery and intrigue actually brought MORE attention and speculation to the product.

Goblins turned out to be free mint and there was no requirement for whitelisting or even a Discord group. Their Twitter spaces were also just hours of groans and goblinspeak. Specially stylized fonts and words also created a sense of curiosity towards the project.

These were interestingly, quite an indicator that the project may be better than one thought at first glance.

In my opinion, GoblinTown’s marketing strategy is unconventional and actually capitalizes on one important concept in the crypto markets – capture the mind-share and attention span of TikTok addicted Internet magic money gamblers.

And as Cobie, who has one of the best crypto Substack in my opinion, states,

“Attention is the only scarce resource in crypto.”

Based on the quadrant, Goblintown was able to utilize unconventional marketing tactics and be part of the Popular axis. Whether it will be a ‘Retail Trap’ or ‘Winner’ remains to be seen.

As stated earlier, the phrase goblin town is a slang for bear market.

The success of GoblinTown, to me, is partially a manifestation of the bear market itself, where players start to abandon their ideals and shiny narratives of the future of finance, the Metaverse, Play-2-Earn etc and start punting some of the most absurd things to make money.

Imagine a wet towel where people are trying to squeeze out as much water from it as possible before it is wrung dry.

It seems to me that in crypto’s market, the MORE absurd something goes, the BETTER it is at grasping our attention today.

Have your tokens go through “rebase” (a.k.a fancy term for inflation) and earn 10000% APY?

Let’s not forget how 20% stablecoin yields was frankly, ridiculous in the start of the bear market, when DeFi yields on stables were starting to crater sub 10%.

That did not stop people from flocking towards it, or coming up with grand theses and explanations on why LUNA could survive.

Also Read: Luna Is Worth Close To Nothing: Here’s What These Investors Went Through When It Collapsed

LUNAtics were criticized as a cult and echo-chamber, but as irrationality goes in the market, the community support for LUNA and the God-complex Do Kwon had got pretty absurd, didn’t it?

Prior to the collapse and powered by how much attention it grasped over the crypto space, LUNA did do impressively well – an ATH of $119 and 40 billion in market cap in April 2022.

Walking to earn, another variation of unsustainable tokenomics have questionable fundamentals, but the novelty of introducing exercise into this scheme is of course, fresh. And fresh does go a long way in attracting attention, allowing for short term success.

So what’s the key take away here?

All I can say is even if the idea or project you might be researching sounds incredibly stupid or resembles rat poison squared, don’t necessarily fade it.

A project might be fundamentally unsound, but there are always intangibles to consider, such as viral marketing. Keeping an open mind, with regards to crypto, and NFTs, can provide some good short-term opportunities. Of course, I do want to re-iterate that in the long run, if the attention and hype is not backed by strong fundamentals and utility, the project fails.

However, having a little fun in the desperate times of the bear market might just be the winning formula for a project.

And in the lands of crypto where the Emperor has no clothes, perhaps the Jester is what we need.

Also Read: The Harsh Reality Of Crypto; Secrets VCs Are Not Sharing With You