Luna Is Worth Close To Nothing: Here’s What These Investors Went Through When It Collapsed 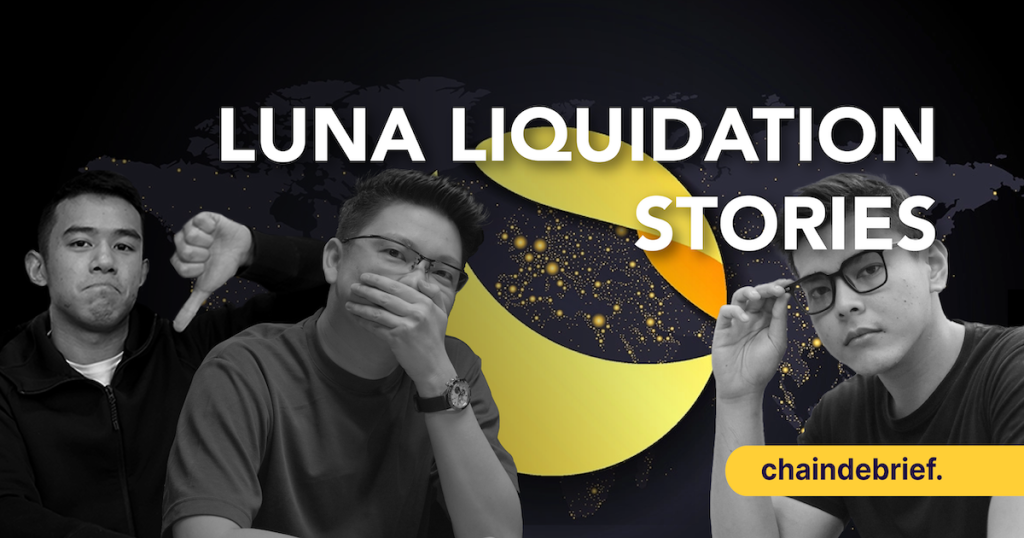 The collapse of the LUNA ecosystem and the death spiral of LUNA/UST hit some investors hard. We interviewed a few crypto natives to see what went down on that day, and what they are reflecting on.

Today we will be featuring the following:

Jacky, co-founder of Chain Debrief, Luna investor, Tze, and Satria from GT Capital, a venture builder DAO that was building and funding on the Terra ecosystem.

An earlier podcast featuring Jacky and Tze can also be found here:

Jacky started looking into crypto seriously in early 2020 and has been actively investing, while Tze had crypto exposure in 2017 and came back fully into the crypto markets during the BSC mania in early 2021.

Since Satria is a member of GT Capital, he has maintained a strong belief in DeFi and wishes to support founders that are creating the next generation of DeFi and Play-To-Earn games. GT Capital is also a big supporter of the Terra ecosystem even after the LUNA collapse.

Prior to the crash, Jacky and Satria had been collateralizing assets on Anchor, borrowing UST, and redepositing to earn 20% APY. When Luna starting going down, Jacky was partially liquidated. He had a small balance remaining and desperately attempted to repay his loans to save his funds.

While transferring his money over to repay the loan, the network became congested.

“I had to watch my collateral being liquidated right before my eyes.”

Satria however, managed to liquidate his other crypto holdings to repay his loans when LUNA started crashing on the 10 May. He had undergone the previous depeg event in May 2021 and was not worried at first. Eventually, he still ended up on the losing end once LUNA went below US$10, causing him to be liquidated on his loan and losing ~80% of his net worth.

Tze’s experience was a little different— he had sold his LUNA on the way up and stabled up completely when the general market turned bearish.

However, his stables were fully in UST. When UST depegged and fell to US$0.60, he sold all of it into USD.

When LUNA went into US$30 he bought some, hoping for a recovery bounce and ended up bag holding. To recoup some of his losses, he finally shorted LUNA and UST once LUNA went below $1.

LUNA’s collapse: What were the warning signs?

Jacky was already aware of some red flags — LFG topping up Anchor Reserves to continue funding a 20% interest rate. However, he believed that LUNA was too big to fail and continued to stay on Anchor.

“It was an open secret but anyone who called it out would be attacked and condemned online. The entire time many LUNAtics were in an echo chamber.”

Needless to say, he was also affected by the narrative and ended up falling for the trap as well.

Satria was aware of the UST 3pool imbalance on Curve a few days before UST started depegging. However, he did not act as Do Kwon stated on Twitter hat this imbalance was due to the fact that they were shifting their liquidity to the 4pool.

Satria was aware that in principle, there was external demand for UST. However, based on the on-chain data, over 50% of UST was only deposited in Anchor instead of other dApps and the yield reserves itself was not sustainable for organic growth.

While TFL had tried to top up their reserves with BTC, the redemption mechanism was also not in place yet.

Furthermore, dApps like White Whale were only capable of doing on-chain arbitrage and not arbitrage off-chain.

“To answer the question of did I think it was sustainable? No, not at the rate Terra grew. Any slower and I would have maybe said yes. However, in hindsight, there were some flawed thought processes that I held which overrode my risk management strategies because of the faith I had in UST & Do Kwon/TFL.”

What should you do if you lost money?

Jacky believes that at the end of the day, you still have to accept it and learn from the lesson. The last thing you should do is to leave the ecosystem.

Tze believes in being mentally ready for the next bull run. Honing your skills, planning projects and learning new things will help you tide through the bear market.

“Money can always be earned back. However, your mental and physical wellbeing is different.”

Satria was hard hit by the impact of LUNA collapse. He had personally spent a lot of time, capital and effort on Terra, personally and with the rest of GT Capital.

“Seeing it get destroyed within a few days was very, very heart-breaking. That’s when I sought help from my friends, both personally and on Twitter DMs.”

Take a break from the screens, enjoying the fresh air and talking it out with his loved ones helped him tide through the tough week. Just like Tze, he too thinks that money is something that can be earned back again.

On conviction after Luna’s collapse

All three of them still have full conviction in the future of crypto. To Tze, this bear market and collapse actually helps to weed out bad projects and players in the industry.

Satria thinks that nothing has really changed as ultimately, everything has a risk of failure. To him, a successful algorithmic stablecoin can exist eventually but currently there are missing tech stacks or proper knowledge on building a sustainable economy that spans over a long period of time.

“It is akin to ideating Netflix when the computer first came out. It was a brilliant idea, but it just wasn’t feasible, socially and technologically.”

For Jacky, his plans are to survive the ongoing winter and rebuild his portfolio up slowly.

Tze has stabled up with only a tiny allocation in ETH. He is hoping to DCA into the market if it dips lower, but is steering away from alts as of now.

Satria will continue sticking to the DeFi sector and investing there, but focus on cross-chain capital not limited to Cosmos, including exploring L2 solutions on ETH.

“Learn to lock in and always take my profits.”

This was Jacky’s short and sweet one liner for his key lesson learnt.

For Tze and Satria, this event has completely changed their perspective on echo-chambers and be more open to listening to critics of an ecosystem.

Both of them also learnt to diversify their risks, either across stablecoins, or across alternative L1 ecosystems. In Satria’s case, more than 50% of his capital was deployed on Terra, which he now thinks to have been very risky in hindsight.

“I believe that information is key in making decisions. However, when you get information faster than your peers and not act on it, that’s just plain stupidity. That was me.”

Also Read: What’s Next For Us? A Degen’s Perspective On The Crypto Bear Market And The Future