A Deep Dive Into Layer 3s & Their Impact on Web3.0 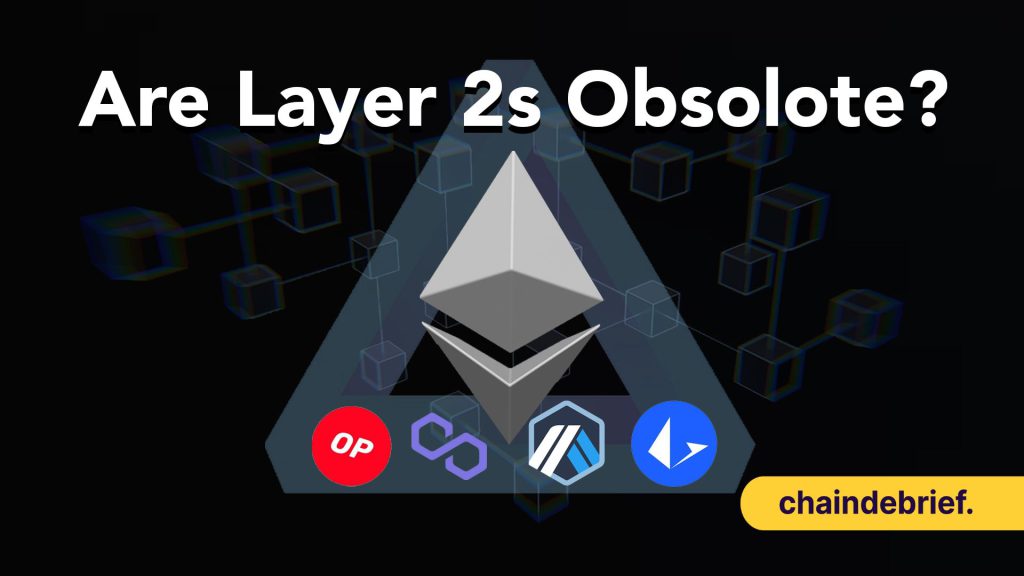 Over the past few years of incredible crypto development, Layer paradigms have constantly been shifting. More recently, Vitalik highlighted how Layer 3s could make perfect sense, given that the architecture could optimize and improve a network provided they have different functionalities.

But with the slew of multi-chain solutions available, can Layer 3s compete with the current Layer 2s, and of course, Layer 1s?

Despite this, existing Layer 2s have not yet solved the blockchain trilemma – one of the biggest narratives in Web3.0. As such, let’s explore whether a L3 would actually solve this nearly decade-old problem.

A Recap On The Many Layers of Crypto

To clarify, Layer 1s (L1s) refer to a blockchain, e.g. Ethereum or any that can exist independently. In other words, those not built on another blockchain and can fully function on its own.

Layer 2s (L2s) are a third-party integration that are used in conjunction with a Layer-1 blockchain. Essentially, they are scaling solutions anchored to an underlying L1, adding security and scalability.

But what exactly are Layer 3s (L3s)? Do we just stack an L3 atop an L2 to increase performance and security?

Whoops, Ethereum is too crowded, lets just add another layer to prevent congestion. Unfortunately, it doesn’t quite work this way. Each layer has something new that does not allow it to be stackable, meaning you can only boost scalability once.

This approach may actually work as highlighted by Vitalik, but let’s first take a look at why we can just keep scaling by stacking rollups on top of rollups.

The Problem With Roll-ups

Before we dive in, Rollups perform transaction executions outside the main Ethereum blockchain and send the data back to the main Ethereum network. If you’re not familiar with rollups I suggest reading checking out a primer on it HERE.

Rollups can also be considered a scaling technology that addresses primarily two bottlenecks, computation and data.

Computation refers to fraud proofs or SNARKs, which rely on a menial number of actors to process and verify a block, requiring everyone else to only perform a fraction of the computation to ensure validity.

This means that SNARKs can almost scale without limit, e.g. a SNARK imbedded into a SNARK which is a subset of a SNARK inside an ecosystem of SNARKs.

Data, however, is a bit more complicated. Rollups aim to compress on-chain data, which is why there has been a huge narrative on zK-proof solutions since it compresses the data by nearly 8x.

However, the issue is that rollups still need the data available on-chain for it to be open source, and for users to access and verify the data. This allows them to independently compute the state of the rollup and join as a prover should previous ones be inactive.

Unlike Computation, data cannot be compressed over and over again, and can only be compressed once. Hence, you can do a rollup imbedded as a subset of a rollup in an ecosystem of rollups, and it doesn’t provide much improvement in scalability.

Just to quickly summarize what Starkware is currently doing, their version uses layers for different purposes. Essentially, if rollups compress data 8x, then rollups on top of rollups will compress data by 64x.

The vision consists mainly of 3 main pointers, each one again highlighting the need for L2s and L3s to have different purposes.

These visions are fundamentally reasonable as endorsed by Vitalik. He highlights that there is an important purpose for this.

It is relatively easy to design a L2 with general compression, but then what is the point of adding Validiums, privacy systems, customized environments all anchored to a Layer 2 instead of simply anchoring to a Layer 1?

In my opinion, this is absolutely necessary if we want the blockchain to be integrated into every part of society. Blockchains not being comparable in terms of interconnectedness and speed due to current issues which could be solved with this.

Also Read: Optimistic VS. Zero-Knowledge (ZK) Rollups Explained: What Are They And How Do They Work?

I would argue that yes, it is cheaper than pre-existing L2 models. To break it down, it is possible to do deposits and withdrawals cheaply between L2s and L3s without interacting with the root chain (L1s).

This means you could move tokens between Layer 2s without ever having to return to the primary chain, or L1.

Amazing right? The issue is that depositing requires waiting for the fraud proof window. For example, if a token is rooted on Ethereum, withdrawing from the Layer 2 with the base contract or wrapped contract back to Ethereum will take a huge delay whereas depositing is instant.

This is when zK-rollups come into play, as they are much faster and do not require such a long waiting period due to security reasons.

Furthermore, the cost of a rollup is relatively cheap. However, there is a high fixed cost for submitting batches of transactions to the chain.

The rollup could simply wait till there is a large demand of transactions before it submits a batch, forcing users to wait for high-security confirmations. This is unfeasible if we want to see enterprise and retail adoption.

Imagine waiting for 12 hours for a Paynow transaction. Its not feasible for everyday transactions. This means there can be two options, wait longer to get cheap costs, or wait a shorter period of time for high costs.

An L3 could solve this as a zK-rollup inside a zK-rollup would greatly reduce costs by nearly 20x, meaning transactions could be sent incredibly fast while still maintaining a high degree of security.

However, if demand is still really low, this could pose a problem, but we could always optimize it by adding another Layer (4th Layer) on top of the Layer 3.

I’m not entirely sure of the implications, but I would presume that if we use the Layer 3 for customized transactions, we could created a Layer 4 as a disposable layer that only comes in during weakened times of traffic.

To sum it up, a layer 3 scaling solution that consists of stacking the same layer on top of itself does not work. It should be separated for different purposes, which is why Validiums on top of rollups do make sense even though they compromise security.

It would make sense to isolate a Layer 2 to primarily in order to increase scalability, follow the “blockchain within a blockchain” pattern, and inherit the full security of the Ethereum blockchain.

Of course, this may change with new innovative languages that come with a new set of inherent properties such as MOVE, Nightshade sharding, or perhaps even DAG technology.

While rollups may not be the best solution, major implications are present. Implementing them into a greater agenda, and leveraging their technology, could help to improve the overall functions of any blockchain network.

Also read: Ethereum Up 10% In One Day – How Smart Money Is Playing The Bounce