Cardano To US$10? How I Recovered From A 70% Portfolio Drawdown 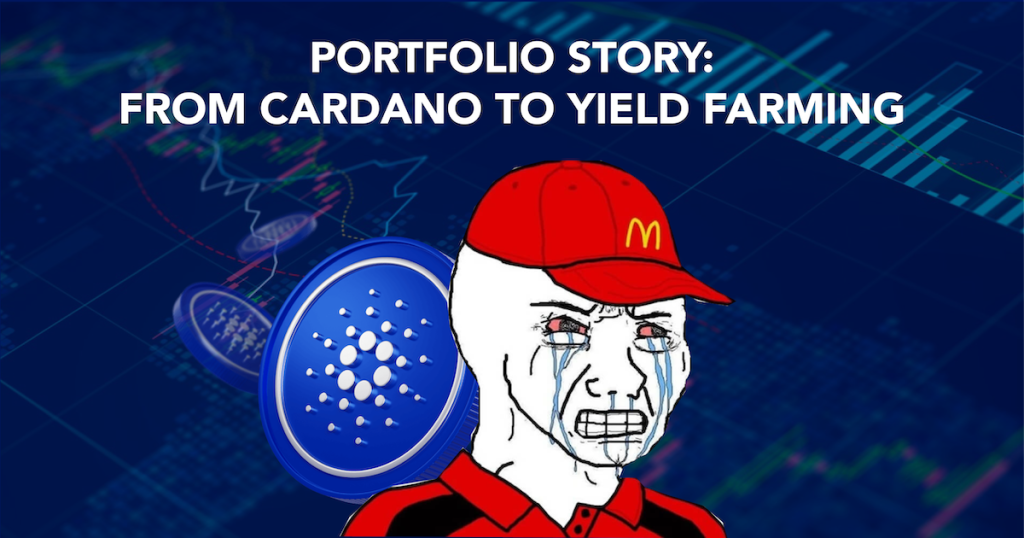 In 2020, I was on the train and overheard two middle-aged men talking about Ethereum. I remember remarking to my friends about how I hoped to never be like them.

Today, my job is writing about crypto, my net worth is almost fully on-chain and I spend most of my time listening to podcasts about blockchain technology. As someone who has done relatively well despite my late entry, I thought it would be good to recap my progress and add some humour to a rather bearish market.

I remember getting my first CEX account and seeing $ADA at US$2. Having absolutely 0 investing experience, I aped EVERYTHING I had into it, praying for the number to go up. I remember “diversifying” into $XRP and $DOGE as influencers shilled me an easy 10x.

No joke, this was literally my portfolio.

I would scoff at $BNB for not being decentralized, $BTC as being boomer technology, and tell my friends “Cardano to US$10”.

However, I entered the market at the pico-top around March 2021 and was buying high every bounce. As my bags kept going dropping, I took the time to actually do my own research on what I was putting my money in.

With that, I took a simple DCA method, investing in my favourite L1s, taking profits on the way up. However, a single tweet would soon change my whole view.

It wasn’t exactly this tweet, but the message was the same. There were gains to be made on centralized exchanges, but being on-chain and early to small caps was extremely profitable.

I started bridging, doing research, getting on discord, and diversifying the people I interacted with, always in search of new alpha. At the peak of the bull run, I had multiple 5x days, giving me the bulk of my capital now.

Peak euphoria for me meant apeing into every new project that had at least a road map. No time on their gitbooks, barely any research and boom I was left bag holding a ridiculous position in an obscure project with zero conviction, or just simply getting rugged.

I started trading too, spending hours staring at charts going up and down while drawing imaginary lines on them. With every win I was a genius and every loss, simply unlucky.

However, when the market crashed, my alts managed to perform the fabled -90% followed by another -90%. My leveraged positions were all liquidated overnight, and my crypto net worth was down more than 70% at one point.

While it’s never nice to sell at a loss, there was nothing else to do. I exited low-conviction positions, spent some time outdoors, and revamped my whole portfolio from scratch.

Honestly, there was nothing more satisfying than not being leveraged and being able to sleep at night. Simple yield-farming and not having to stare at charts 24/7 were such a breath of fresh air.

Since then, I’ve hedged my positions and managed to almost regain portfolio all-time high, sitting comfortablywhile relatively risk-off. Back to the days of averaging into positions I strongly believe in.

My best and worst trades

While my story may not be the most unique, I think it would be nice to recount some of my most memorable positions and what I learnt.

My first ever 10x — I had no clue what I was doing. Honestly, the coin just looked really pretty, but it showed me how much number can really go up.

Roughly 10x. $LQDR was my favorite play going into 2022 because of the hype surrounding the Curve wars. My biggest mistake was locking up about 80% of it for 4 years and not being able to sell when it did a massive 25x run.

Easy 2-5x, pays to just be constantly on twitter scouring for new information, buying small-caps before the majority. Biggest mistake I made was always bag holding a bit all the way down “for the tech”.

Wonderland was a project I had way too much conviction in for some reason. I was spending hours “side-stepping” my position just to lose money to exchange and gas fees, while my bags were in free-fall. However, it was a very good lesson in why not to bag hold and helps me cut positions much earlier now.

Also Read: A Wonderland Of Controversy: Is It $Time For Frog Nation To Dissolve?

Was not really a trade, but I lost nearly 5 digits worth of Tomb-FTM LP due to an exploit, half of all I had on the Fantom Ecosystem. It reminded me how risky the crypto space was and since then I do a lot more research before interacting with contracts.

When $LUNA was at US$60, I converted half of it to $KUJI. Why? Because I was in peak euphoria, and nothing could go down.

The main lesson was that while I may believe in a project, it doesn’t always mean their tokens accrue value well.

In total, my portfolio went from four digits to almost six digits in one year, something I am EXTREMELY, EXTREMELY happy about. While I still lose money trading shitcoins all the time, I’ve realized three important things — bet sizing, cutting losses and having stablecoins to buy dips.

While my positions with less conviction may go to zero, being comfy and collecting yield while having dry powder to buy when no one else is buying always feels good. Not copy trading, over-leveraging or being too exposed when I have no idea what is going on are my hard rules these days.

Also Read: My First Experience With Crypto: How The “Next Big Thing” Crashed And Burnt