Charmyn Of Bybit On The Current Crypto Market, Gaming & The Future Of Blockchains 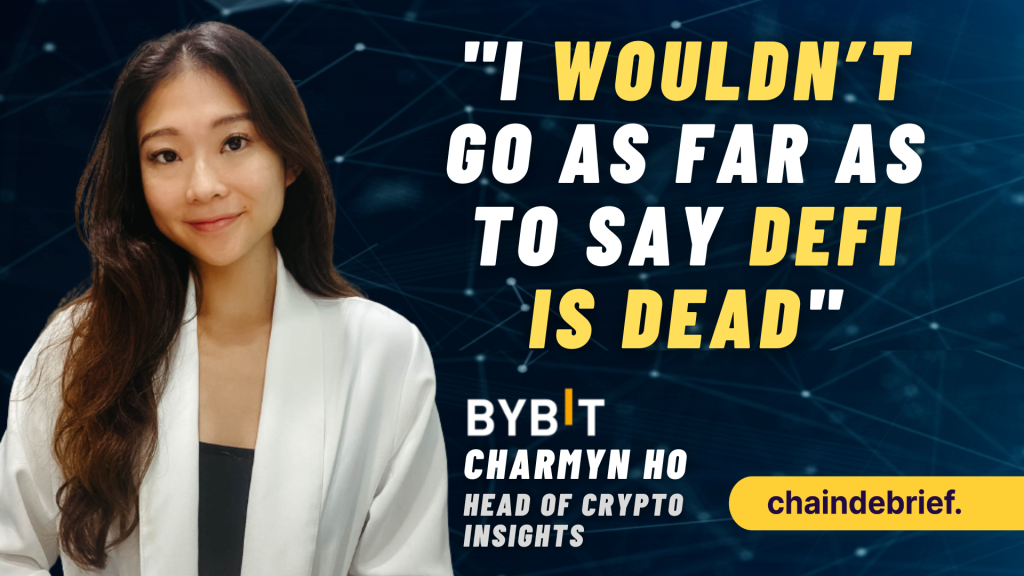 The rise in popularity of web3 has not only encouraged many to dabble in the space but delve deeper with new innovations and concepts foreign to what traditional finance has to offer.

It is a space where opportunities are given to all, so long they are willing to grab them. Charmyn, however, can say she has.

From going down the rabbit hole of yield farming in DeFi to buying NFTs purely for a new display picture, there are multiple reasons why people enter and stay in the space. Axie infinity was the reason the current head of insights for Bybit has her interest piqued in web3.

How the journey started

While most gamers have a negative connotation of how NFTs will ruin gaming, it actually poses an opportunity for them for real ownership and an avenue for economic revenue.

Undoubtedly, Axie Infinity was the first play2earn game to garner significant adoption on a global level. We saw a glimpse of what P2E could be in the future, although at the moment, price action may reflect otherwise.

For Charmyn, Axie Infinity to her was the gateway into crypto. It compelled her to dive even deeper into exploring the intricacies and opportunities that came with web3. Eventfully, this led to her decision to jump into the crypto world, leaving her role previously as an early childhood educator.

“I’m glad I made that decision and there was something new to be learned everyday.”

Even now, her role as Bybit’s head of crypto insights requires her to do just that.

From on-chain analytics to deep dives in dealing with heavy data, she leads a team of writers and analysts who are taking big strides in establishing ByBit being a thought leader in the space.

We are in a bear market, which can be seen as consistent with the price action in crypto, especially in BTC and ETH.

Although the general sentiments tend to be on the pessimistic end, it definitely did not stop developers from building in the space. The importance of developers’ building is ever potent in the future developments in the space. They function like the bedrock of web3, without it, the structural integrity of crypto may just collapse.

“Now that we are in a bear, the bull is sure to follow, it is just a matter of when.”

Despite the current market outlook, we are reminded that if market conditions play out in a cyclical manner, there will be ups and downs. In the grand scheme of things, this bleep may seem insignificant to what is to come in the future.

While opportunities may present themselves in the bear, we still need to approach projects with caution. The narratives in crypto are often fueled by “loud noises” and FOMO, which may result in a dangerous concoction most investors easily fall victim to.

“Always think of what can go wrong first, before being drawn in by noise.”

The future of blockchains and how to evaluate them

“I think the current state of L1 and L2s show much promise for the future.”

However, until there is a full-proof solution to the trilemma between decentralization, scalability and security, L1s and L2s will always have room for growth.

As we see 2 major hard forks in the month of September, the Ethereum Merge and Cardano’s Vasil hard fork, it showed signs of developers continually making improvements in the space while maintaining security and striving for scalability in the space.

“I also think that in the near future we will begin to see more developments in terms of roll-ups that help blockchains with scalability.”

One aspect of crypto in which crypto prides itself compared to traditional finance is DeFi. Even with lacklustre activity in terms of its TVL, Charmyn “wouldn’t go as far as to say DeFi is dead.”

With aspects like security, usability and regulations which still needs to be worked on, DeFi still holds the potential in becoming the new way people earn in the future.

The first step in evaluating a project is finding out its purpose. While some projects are very ambitious, diving deeper into what they propose may “not be as feasible or possible to execute as it should be.”

Secondly, look at the team and backers. This could reveal how reliable a project/team actually is. Although not definite, it could still provide retail investors with relevant information in making any investment decisions.

Once the two aspects above are fulfilled, tokenomics is next. Key aspects of tokenomics we should be aware of are what the tokens are used for (governance/utility), and their mechanism (inflationary/deflationary) which keeps it sustainable as well as value accrual.

Are NFTs here to stay?

The term, “NFTs” often comes with the idea of profile pictures, apes and 8-bit art all selling at ridiculous amounts of money. While that could be what the general public seeks, NFT is an entirely new realm which is, instead, “multi-varied and dynamic.”

As we are slowly moving beyond more than just PFPs for NFTs, we hear of new innovations such as Soulbound tokens, which are permanent and non-transferrable, Social NFTs and music NFTs among many others.

“NFT space could potentially be a good entry point for many into crypto”, especially with what got Charmyn in crypto at the very beginning, X2E models could be key in engaging a larger target audience, regardless of background, and re-imagine how earning can be done in the future.

On top of minor tweaks in making learning tools more efficient, it also boils down to how accessible and profitable the industry is in sustaining interest amongst users. Only then we might see a “high chance of adoption.”

X2E models play an important role in bridging the gap between web3 and the existing web2 user base. To achieve this, X2E model developers have to keep their model sustainable, and not rely on a model where users reinvest tokens back into the game to potentially earn more tokens in the future.

However, sustainability does not solely rely on tokenomics. Although a sinking mechanism and maintaining a healthy demand-supply for tokens is imperative, to garner significant attraction, there need to be intrinsic benefits the project can bring to users.

As these tokens are exposed to volatility, as such, so will the profits the users make. And we all know how this would turn out.

Having a healthy and active user base, projects need to find another form of benefits which bring value to the users engaged. Doing so, will tide the project through the highs and lows of the market, ultimately, a step towards sustainability.

Find out more about the potential of X2E models and the challenges it faces with ByBit’s deep dive into $SWEAT and the Sweat Economy.

Also Read: Thanks For The Free Money: Here’s How I’ve Been Trading The CPI with a 100% Win Rate