Thanks For The Free Money: Here’s How I’ve Been Trading The CPI with a 100% Win Rate 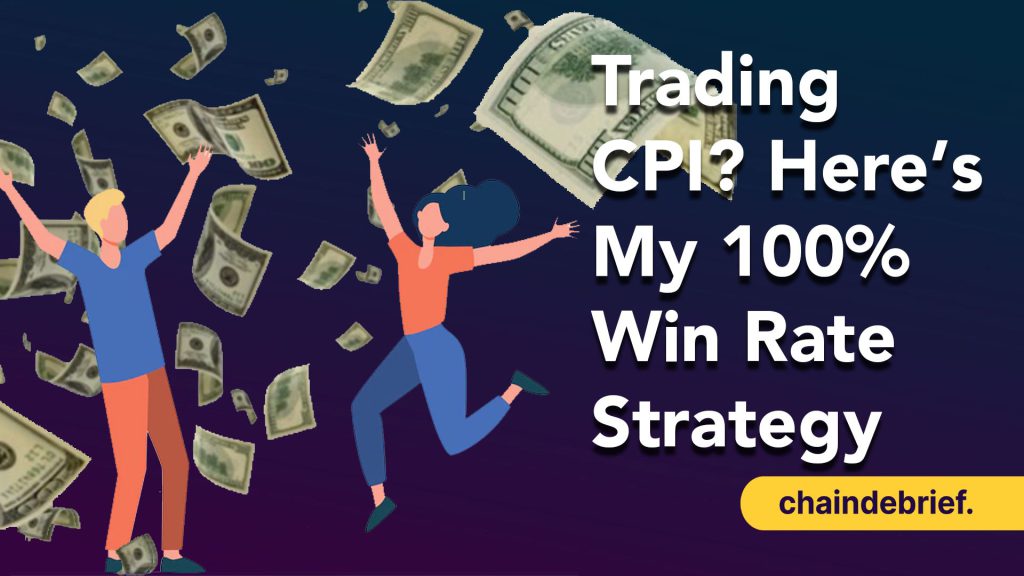 The lack of interest in the crypto markets have been a huge hit to morale recently, with $BTC trading below $20,000. While many have seemingly left for “greener pastures” like bonds (how’s that going by the way), the market is still ripe with opportunities for the picking.

With that said, the unpredictability within crypto coupled with low liquidty shitcoins makes it a difficult place to trade.

One event that has always delivered on volatility, however, are CPI announcements. Seemingly the only thing left to trade around in the bear market, here is how I have made several trades with a 100% win rate around CPI announcements.

Picking Up Free Money: A Lesson From Crypto Twitter

Before we delve into the how-to, we should always look into the why.

As someone without much of an edge in trading, I tend to stay flat unless I’m very, very sure the trade has a high chance of paying off.

Therefore, I try to take trades that have

mgnr on twitter puts it best. Why waste your capital stack trading choppy conditions, when we can pick up free money from the floor? After all, if there is a 30% chance that you could 10x, but an 80% chance you could 2x consistently, would you not choose the latter?

5 times a year, we take the free money and call it a day. The rest of the time, we touch grass.

CPI announcements have been those moments for me.

The Grand Heist: Doing More For a Crowded Trade

For those not in the know – the CPI, or Consumer Price Index announcements, show the periodic change in inflation rates.

When inflation rates are higher than expected, speculators turn bearish and are likely to short the market.

When inflation rates are lower than expected, speculators turn bullish, and are likely to long the market.

While I am by no means the first to attempt to trade the CPI, or probably even deploy this specific method, I feel there is still value here that could be shared.

Basically, we can bet on one thing around these announcements – volatility.

While I am no oracle and cannot foresee whether prices will go up or down, playing around the volatility is something I can do.

Ever since May, when the CPI “meta” came into play, $ETH has moved more than 1000 basis points after every event. In fact, it has averaged an approximately 12.6% daily range on CPI announcement days.

Assuming you catch at least an 8% move on 20x leverage, that translates to a 160% gain, twelve times a year.

But just exactly how do we bet on volatility?

The Only Time I Use a Stop Loss: Trading CPI Prints

I do not know whether inflation numbers will go up or down every month, I only know that the crypto markets will react to it.

Therefore, I take both directions leading up to the announcements, with tight stop losses. Instead of betting purely directionally, we hedge the volatility with the opposite trade.

Essentially, we take both a long and short position leading into the CPI announcement, with exactly the same risk-to-reward ratio.

Heading into the CPI announcement, these were my approximate long and short positions, with stop loss and profit taking levels. Both were opened approximately 30 minutes before the announcements, with a 1% stop loss.

Opening two different positions on the same cryptocurrency can be done on FTX by opening a sub account.

While I previously mentioned that you should be able to catch an 8% move, another great lesson that has cemented itself within me from CT is to never try to catch the maximum potential of a trade. Doing so has only left with frustrated or on the losing end in the past.

Therefore, profit-taking levels are set to 6%, which is actively managed in case a reversal suddenly happens, or the volatility is higher than expected.

However, with my other trade expecting to get stopped-out, we expect a 1:5 risk-to-reward ratio during CPI announcements. Nevertheless, At 20x leverage, this translates to a 100% gain on risked capital, a healthy amount of profits especially in the bear.

Rinse and repeat every month, and it becomes a 1200% gain year on year, something to look forward to, even in the bear market.

What Goes Up, Must Always Come Down: Profiting From Reversals

We have already established that trading CPI announcements is about as +EV (expected value) as possible. But what comes after that?

With CPI announcements being such a crowded trade, there are bound to be plenty of people market closing their positions. With that will come a flurry of retracements, breaking the CPI trend temporarily.

Here, entering a long after first green candle without long tails, with a take profit level at the daily open is approximately a 1:3 risk-to-reward trade.

Furthermore, this particular instance led to a rise above the expected reward level.

While you could catch the bottom for quick gains, zooming out shows that these temporary reversals are exactly that – temporary.

They provide a valuable re-entry point for what is likely an eventual continuation. Entering at V-shaped reversals are also a better bet than trying to catch bottom ticks, due to the larger risk-to-reward ratio. However, these are on the longer time frame and traders doing this need to be able to stomach a continuation in the reversal.

For The Tech Savvy: Beating The Crowd With Code

For those willing to take the time, a bit of code can go a long way.

CPI announcements, are of course, a fastest-fingers first game. Whoever is able to process the information and enter a trade based on it quicker is able to capture more of the move.

By being first, you not only have leeway to hold your position, but can also enter with larger size. Currently, the market trades directionally with CPI, and using this knowledge can mean even higher returns.

While you can theoretically do this manually, the amount of human error possible is just endless.

By running a bot to scrape accurate CPI releases, you can front-run everyone performing this method manually, with more reliability and lower downside

While I personally am not a coder, hiring someone online from a freelance site such as fiverr for a few hundred dollars is worth it. Especially considering potentially millions could be made with these bots, taking the time to research this option is invaluable.

The Risks Involved With Trading CPI

Trading releases is not all roses. Especially in such a crowded trade, the risks that something goes wrong is elevated.

With human error, uncertain market conditions, and lackluster liquidity at best, there is always the chance that this strategy may not work for you. Despite this, crypto reward the nimble, something that should be ironed in to anyone who has ever been liquidated before.

The biggest concern we have trading with a tight stop loss is pre-event volatility.

For example, if you were trading CPI numbers in May and took your position slightly too early, you would have lost on both sides of the trade.

The alternative, giving yourself more leeway with your stop loss, would just hurt your expected returns over time. There is a real risk that you could lose trading every single CPI announcement this way, taking massive hits to your capital over time.

Removing a stop loss also creates a possibility of getting liquidated on both sides – not something I’d recommend you to try.

Furthermore, human error is a huge issue with trading events.

Not only could someone mistakenly take the wrong positions in their haste to be the first, something like FTX’s front-end could go down. This could leave you stuck in a position you do not want to be in, and possibly double stop-lossed again.

To best prevent these issues, here are a few best practices when using this trading method

The Grand Crypto Casino is Back Again?

Trading is a PvP event – there is absolutely no way around this fact. When you go long, someone on the other side of the screen has to go short, and vice versa.

However, that does not mean this method is foolproof. From the greatest thought leaders in our space, to “insured” exchanges, crypto has been a humbling place for us all.

Recent CPI announcements have heralded hundreds of millions in liquidations, from both sides. Even the smartest and sharpest traders can be at risk with one wrong click or assumption.

Computers codes can break sometimes, and eventually the trade will be too crowded for even them. Till that day comes, however, I will be enjoying the grand crypto casino as much as I can