A Controversial Opinion: Why Meme Coins Should be Part of Your Crypto Portfolio 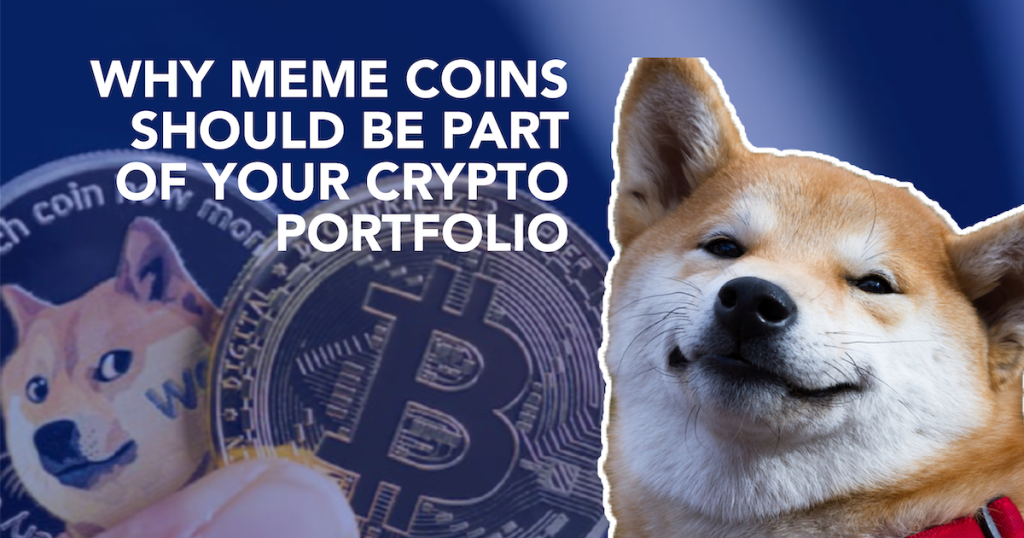 One of the most polarizing topics amongst crypto investors is that of meme tokens.

On one side of the equation, hardcore crypto enthusiasts contend that meme tokens have no intrinsic value, and actually sap liquidity away from the growth of protocols which are genuinely building new applications that are advancing blockchain adoption.

On the other hand, others contend that meme tokens should be treated like any other asset on the decentralized blockchain, with the intrinsic value of a meme token precisely being its ‘memability’, with transparent supply and demand dynamics playing out.

There is also an argument that meme tokens have been one of the strongest drivers of retail adoption and participation in crypto, although critics counteract that these retail investors are merely chasing quick gains and will exit the market rapidly when the tide turns ever so slightly.

For many self-proclaimed “serious” investors in crypto, meme tokens are a no-go –- they damage the credibility of an individual when engaging in conversations about the topic.

The idea of buying something which many retail investors have poured money into without any proper diligence is also off-putting to these “serious” investors.

I have personally been involved in many conversations where the very idea of ‘investing’ into a meme token is dismissed as ludicrous. In the immortal words of someone I used to know — “this is not real investing“.

As the devil’s advocate, my first response was simply “what is real investing then?”.

Of course, I was greeted with the typical arguments that investments must be in real assets with real tangible value. This is when I whipped out my phone and showed the dictionary definition of “invest”:

In this article I contend that meme tokens (particularly Dogecoin and Shiba) should be taken seriously in every crypto investor’s portfolio.

If investing is the act of putting (money) into schemes with the expectation of achieving a profit, meme tokens arguably represent the highest and purest elevated form of investing. Definitions aside, there are a few key reasons why meme tokens cannot be simply dismissed.

1. Meme tokens occupy a sizable portion of the overall market

If I were to ask you today for a safe stock to buy, your natural answer might be to ask me to look at blue-chip companies. If I were to ask you what “blue-chip” means, you would probably guide me to the top 10 companies on the NASDAQ, or other major stock exchanges globally.

If I were to take a look at the top cryptocurrencies today by market value, this is what I would see:

With Dogecoin and Shiba Inu occupying #9 and #11 on the table, we certainly have to consider both tokens as established cryptocurrencies.

Indeed, the combined market value of both tokens is ~USD66 billion, even after the recent value correction over the past week.

Indeed, the enduring popularity of Dogecoin in particular shows clearly that meme tokens are not merely a fad, but rather a serious financial force to be reckoned with.

The rise and rise of Shiba Inu over the past year has further established meme tokens as a distinct asset class. For one, it has demonstrated clearly that the Dogecoin phenomenon was not simply an isolated, one-off, momentum-driven frenzy.

Moreover, the capital flowing into Shiba Inu has not necessarily been driven primarily by Dogecoin holders switching their holdings for Shiba (else we would have seen a severe price correction on Dogecoin). The fact that we have two established meme tokens today is a clear sign that demand for meme tokens is not merely a fad.

If you think idea is crazy, do consider that the greed and fear index is a well-established marker of bullish/bearish sentiment.

2. There are possibilities for serious applications in DeFi

While the utility of meme tokens remains limited at best, the consolidation of value in Dogecoin and Shiba Inu mark them out as interesting candidates for DeFi applications.

A potential use-case could be drawing on Dogecoin and Shiba as collateralized assets in the minting of stablecoins, with the collateralization challenge continuing to be a problem that innovators in the space are grappling with.

What is critical here is that there is much room for capital productivity growth in both assets. In many regards, both Dogecoin and Shiba Inu are growth assets, to the extent that their current utilization is a minor fraction of the potential of the full capital base.

3. Valuation is more of a meme than less of a meme

Valuation is a..what? Before you baulk at this idea, consider the definition of a meme:

If a meme is an element or idea passed from individuals to others via imitation, then the concept of valuation is one of the ultimate memes in human history.

Why is diamond jewelry valuable? Aside from the masterful pioneering advertising campaign of De Beers back in the day, which firmly established the idea that diamonds are valued assets representing the ultimate romantic gesture, the very idea that diamonds are worth a lot of money is an idea that has been passed down generations by imitation.

To extend this idea further — what anchors the valuation of a company’s equity? For many finance pros, methods such as discounted cash flow (DCF) analysis, which supposedly gives some form of intrinsic calculation of value as an output, are fundamental.

However, anybody who has ever worked in the space would tell you that such analyses are riddled with assumptions about future value, many of which are more arbitrary than not.

The valuation of companies is also typically anchored against market multiples. The rise of the cash-burning, non-profitable start-ups scaling aggressively and listing on the capital market is a well-established theme which has already challenged more conventional understandings of value.

This has been stretched further by companies such as Tesla, where such multiples make little sense when considered against the company’s underlying metrics. Yet Tesla’s stock is flying, and continuing to polarize analysts, many of whom had called Tesla’s valuation absurd at half or even a quarter of its current value.

Valuation is simply an idea and concept where “established” standards have historically been deferred to ‘industry experts’, without much questioning or deep-diving into the assumptions driving these standards.

One of the greatest memes in finance is the concept of a P/E ratio, which arguably has no value without a benchmark. Even with a benchmark, it is difficult to ascertain what a ‘high’ or ‘low’ ratio is – one only needs to look back in history and see what ratios people considered high at particular junctures (hint: it keeps changing, by a lot). Yet many retail investors continue to throw the term about as some sort of intrinsic value marker.

At the heart of every publicly traded security or token, is simply the dynamic of supply and incremental demand. Tesla’s stock has continued to soar because incremental buyers have continued to flow in. The value of meme tokens such as Dogecoin and Shiba Inu have also soared for the same reason. And diamonds continue to be really expensive because we continue to meme the concept of its value into existence.

4. People buy the lottery all the time

While many people are commonly ridiculed for buying new meme tokens (you must have been scammed!!!), the launch and growth of any meme token which is decentralized (i.e. not rugged by whoever launched it) are no-different to established meme tokens.

The only difference is that these new meme tokens are a lot less established than their more distributed and traded counterparts, and capture much less market mindshare given that they are emerging.

Should one buy such tokens? Given the high degree of uncertainty on whether these tokens can achieve and retain popular interest, the best way to think about purchasing such tokens is to consider them as lottery tickets.

It is common to hear amazing stories of individuals who bought Dogecoin or Shiba Inu early, and held a few hundred dollars-worth of tokens then to their current value of millions.

But the fact of the matter is, at the point that these tokens were purchased, the status of both assets were even worse than the meme tokens that are popping up left, right and center today, given that there was no real thesis that they could ever become established assets on their own right.

For every Dogecoin or Shiba Inu, there is an Anon Inu — one should consider such investments to have binary outcomes (win or lose), and only invest what one is willing to lose entirely.

If meme tokens are an index of greed, as I have argued, emerging and new meme coins lie at the riskiest end of the greed spectrum.

[Editor’s Note: This article does not represent financial advice. Please do your own due diligence before investing.]

Also Read: Crypto All Time Highs – How To Avoid FOMO During A Bull Market