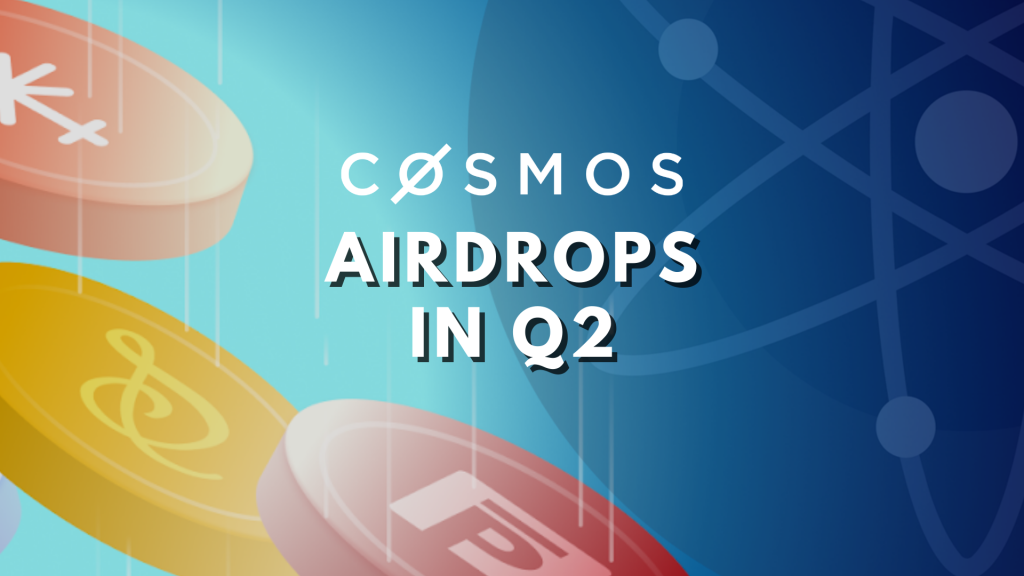 In an airdrop, projects distribute tokens to the wallets of certain investors and in other cases, as with the ENS, projects will airdrop tokens to users who have utilized their service.

Occasionally, projects will distribute tokens to potential investors in order to promote their product.

Here is a video I found useful in how Cosmos Capture value through its airdrops and shared security:

This article will shed light to the upcoming airdrops on the Cosmos ecosystem.

But before we do, here are few pointers you should take note before delving into chasing new and the next airdrops on Cosmos.

Do your own research

If you have the option of receiving airdropped tokens, you should first investigate the project that is delivering them to determine if it offers a legitimate offering. Basically, do your own research and make your own judgement based on that.

Even if the airdropped token is secure to claim, the project’s goal may be to benefit a small group of founders or essential contributors.

A drop’s code, website, and social media may all provide information about it and its project. Before connecting your wallet to a project’s website, look into its basics and what it promises.

For one, if a project lacks on-chain security to protect funds, its founders or developers might be able to control the movement of funds. This commonly happens in “pump and dump” or “rug pull” schemes, where developers abandon a project and leave with investors’ funds.

If a project airdropping tokens doesn’t have a product, plan, governance blueprint, or other similar features, it might be a red flag. It might be risky to claim tokens now with the promise of being taught specifics later.

With the knowledge that some airdropped tokens might be malicious and to always do your research, let’s take a look at some of the upcoming airdrops on Cosmos:

If you have not gotten tokens staked in the Cosmos ecosystem, you might still be eligible to do so for Diffusion Finance.

Also Read: All You Need To Know About Diffusion Finance And Its Latest Airdrop

Diffusion finance aims to be Evmos’s AMM in powering liquidity for Cosmos EVM. Diffusion is a Uniswap v2 fork, which leverages on the Cosmos SDK to enable use cases around composability, interoperability, and fast-finality.

Diffusion believes that liquidity providers should have a strong voice in the governance so they aligned that with the tokenomics of the platform.

Incentives derived from the $DIFF token will be distributed over time to the right governance participants as airdrops.

Snapshots, claim date and eligibility has not been revealed yet which might give you an opportunity to still be entitled to the airdrop.

2. Senatus: The platform bridging the gap between people and governance

The goal of Senatus is to bridge the gap between governing bodies and retail investors. They have an end goal of creating a full-fledged governance system eliminating the existing form of government.

Senatus aims to set up a platform which can make use of the decentralised nature of blockchain and use it towards re-inventing the regular governance modules.

$SPQR will be initially released as a CW20 token on the Juno network.

As the Senatus platform evolves, the token will be built on top of the Cosmos SDK. All the token holders will be provided with a 1:1 match of native $SPQR token on the native chain.

Read More: Why I Am Investing In Cosmos In 2022, And Why An “ATOMic” Explosion Is Incoming

$SPQR token total supply is 100,000,000. Airdrops for $ATOM and $JUNO Stakers. There will be two airdrops, the 1st will be Plebdrop and the 2nd will be the Senate drop.

As mentioned above, $ATOM and $JUNO stakers will be rewarded with 40% of the supply as airdrops. Snapshots has not been done yet so there still might be some time for you to get your tokens staked.

Owlies is a interoperable, deflationary NFT trading game built on the Juno Network.

The cross-chain NFT collectors game is powered by three native asset — $OWLIES, $BRNCH and $STRDST, which serve and power core functions on the decentralized game.

Find out more about Owlies roadmap below:

4. AQUA: A DAO dedicated to ending the world water crisis

Aqua aims to be a revolutionary DAO dedicated to ending the world water crisis built on the Juno Network.

Its narrative includes incentivising human beings to build, create, and innovate alongside them.

At mint, 300,000,000 (three hundred million) tokens will be minted. Of the initial tokens minted, 60,000,000 will be set aside for pre-DAO token allocations including team rewards, LP incentives, the DAO treasury, and finally, an airdrop to all ATOM and JUNO stakers.

15,000,000 AQUA tokens are being set aside from the genesis to fund and incentivize LPs on JunoSwap and on Osmosis down the road.

They are also airdropping 8,000,000 AQUA to the JUNO and ATOM community for their support of our project. More details on the snapshot and claim dates are to be released soon.

Cronus aims to be the premier decentralized exchange on EVMOS (EVM on Cosmos).

Its estimated launch date will be Q1 of 2022, likely a few weeks from now. There will be two snapshots taken between 6 March to 28 March, of those who have a minimum of five $ATOM, five $JUNO and five OSMO staked.

Find out more on Cronus here.

Remember to do your due diligence amidst searching for the next airdrops you want to get on. Airdrops can come as a great incentive, but may go south if you choose ignore doing your research and the red flags.

With the rapidly expanding Cosmos ecosystem, I hope to bring you more airdrop updates on a regular basis so WAGMI!

Read More: The Case For Osmosis: Why I’m Bullish On The Top DEX In The Cosmos Ecosystem