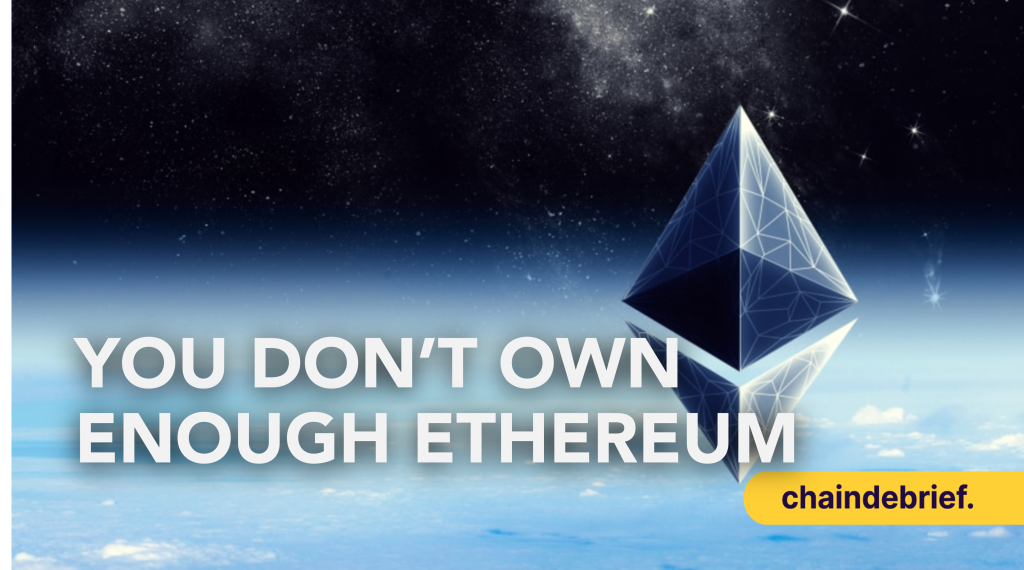 They almighty Ethereum. At its peak, the 2nd biggest cryptocurrency saw its price peak at US$$4,891.70 but is currently down 62% to a price of US$1,884.42. Although the sentiments in the market over the past few months have been bear, the opportunity to accumulate Ethereum has never been brighter.

Buying Ethereum now is the same opportunity to buy Ethereum at the start of 2021, but with more developed dApps and a stronger infrastructure. If you still don’t see that as an opportunity, this article may shed some light on why the opportunity is now.

According to The Block, the total stablecoin market capitalization is at US$143B, down from its peak at US$180B.

Why is this significant? Stablecoin contributes a large chunk of the total crypto market cap. They act as a hedge against the great volatility of the market and allow users to “cash out” without leaving the ecosystem.

Stablecoins are further utilized with the help of stablecoin yield farms. On Ethereum, Aave and Uniswap are the 2 main platforms which enable users to grow their stablecoins in crypto, the rates incomparable to those in traditional banks, of course, do so at your own risk.

On Ethereum, it allows anyone with an internet connection to conduct their finances, in a trustless manner. There is no middle man in DeFi, you technically go straight to the source and reap all the benefits (other than paying the network fees).

DeFi currently stands at a fraction of the entire capital market. If you are reading this you are actually early. It is just the beginning and there’s plenty of leg space to grow into something massive.

The power of DeFi cannot be understated. When you look at the top 10 TVL across different DeFi projects, you’ll realize that 8/10 (except JustLend and Pancakeswap) of these are based on Ethereum.

This is a significant portion of the pie. As DeFi attempts to garner significant adoption, Ethereum will be the most popular in attracting the masses to its current solid user base.

Also Read: Is DeFi A Dead Wasteland? What Is Needed For A Revival

3. Vitalik Buterin and his team of developers

Another thing massive about Ethereum is its developer base. They have the largest pool of devs, and no other platforms come close. They are the “top dog” of the space.

You may ask how this is important. Especially in the bear, there is more focus on the community than asset price. It can also be viewed as a great opportunity to build industries and ecosystems. And to do that you need builders.

In my opinion, a bear market is a place where the status quo isn’t working. There needs to be some changing up. Naturally, it will demand innovation, and Ethereum just happens to have the largest pool of resources for execution.

I regard Elon Musk as one of the greatest leaders of the current time, a man of innovation who works on the grounds with his people. And the founder of Ethereum is no different, he develops, creates and executes, just with an additional pop of colour to his clothes.

Also Read: Project Strength: Which Blockchain Has The Highest Developer Count, And Why It Matters

NFT summer. If you were in early into minting CryptoPunks or BAYC, you might be living in the promised land now.

The prices you see above aren’t petty cash for lunch, but ones with a minimum of a 6-digit price tag. This wave is so large so many want to be part of it, companies, celebrities and institutions.

However, we only scratched the surface, there is so much utility to be built and developed. This sector is expected to grow exponentially in the future.

The “blue chips” are all based on Ethereum, with few exceptions from the solana ecosystem. NFTs are another space Ethereum is anchoring, leading the forefront in NFT sales, collections and volume.

Also Read: MetaJam Asia: How NFTs Are Revolutionizing Every Industry

There are dozens of new protocols launched on Ethereum which further improves the use cases of the network. Currently there are “over 3,000 decentralized apps (also known as “dapps”) currently running on the Ethereum blockchain.”

Find out all of the dApps built on Ethereum in the list here.

Whether directly or indirectly, each of these brings value back to Ethereum. Especially when layer2s is becoming one of the main narratives this year, the possibilities are endless and promising for the greater Ethereum.

The new way to govern is through DAOs. Also known as a decentralized Autonomous organisation, you now rely on the organization’s members instead of the board of directors to make executive decisions.

At the crux of it, it is enforced by code, and smart contracts, and allows an organization to function independently from organization members. They are an effective and safe way to work with like-minded folks around the globe.

Ethereum is the perfect foundation for DAOs for a number of reasons: Ethereum’s own consensus is distributed and established enough for organizations to trust the network.

“Ethereum have a clear advantage in the number of DAOs compared to any other. They house more than 4,200 DAOs and protocols requiring governance participants according to data from blockchain voting platform Snapshot.” (Cointelegraph)

Comparatively, the Solana ecosystem has only 140, Cardano has 10 DAOs, according to ecosystem tracker Cardano Cube and Polkadot Substrate says it has just eight.

This is not to discount the fact that among the top 10 DAOs by the number of decisions made over the past seven days, DAO tracker DeepDAO shows that three are based on Solana.

Ethereum is the biggest network with successful layer2s built on it. L2s are frameworks that get built on top of the blockchain, they play an important role in scaling.

Standalone, Ethereum faces scalability and slow transaction speeds, but gets bootstrapped in the area it lacks with L2s while retaining its integrity for complete decentralization, transparency and security.

The current Ethereum mainnet can only process 15 transaction per second, and periods of high network activity would lead to data congestion. This would lead to the rise of gas fees which also slows the performance of applications.

L2 Bundles multiple off-chain transactions into a single layer1 transaction, to help reduce that load. A “roll-up” executes hundreds of transactions outside of a layer1, it rolls them up in a single piece of compressed data and then posts the data back to the mainnet to review in complete transparency.

We are close to the merge, and with that news, spurring the adoption of L2s. Currently sitting at US$5.67B, here are the top layer2s within the Ethereum ecosystem.

Although L2s are separate blockchains building on layer1s, all accrued value all goes back to the blockchain it is building on, Ethereum. There is a positive correlation between L2 adoption and demand for Ethereum, and when the L2 boom happens, so will the price surge of Ethereum.

The merge will transit Ethereum from Proof of Work to Proof of Stake. What this means for Ethereum is becoming a more “environmentally friendly” network consuming 99.5% less energy as compared to the PoW mechanism.

Beyond transforming into an “eco-friendly” network, the completion of the merge has positive effects on Ethereum’s prices in the market.

This even spilled over in DeFi activity, where total value locked (TVL) rose 22% last month.

Also Read: Why The Ethereum Merge May Double Your Net Worth – And Collapse Crypto

Triple halving; The triple halving of Ethereum will occur when the block reward for miners is reduced by 33% three times. It’s all about Supply and Demand. Ethereum is expected to go through a massive supply shock, following the merge which could prove to be deflationary.

“Triple halving may become a meme, but there is a serious investment case here.” Post merge, the selling pressure will drop by 90% and Ethereum is set to undergo the equivalent of 3 halving events in the next 12 months.

Basically, the lesser Ethereum is in circulation, the more valuable the asset becomes. Do what you wish with this information, but this aspect of Ethereum is often overlooked.

The Ethereum user base has been on a steady rise. Permanent bull market.

There are few reasons to be bullish on Ethereum, its use cases are unbounded and innovation is happening at incredible speeds. “Regardless of how much you currently own, you can never own enough Ethereum.”