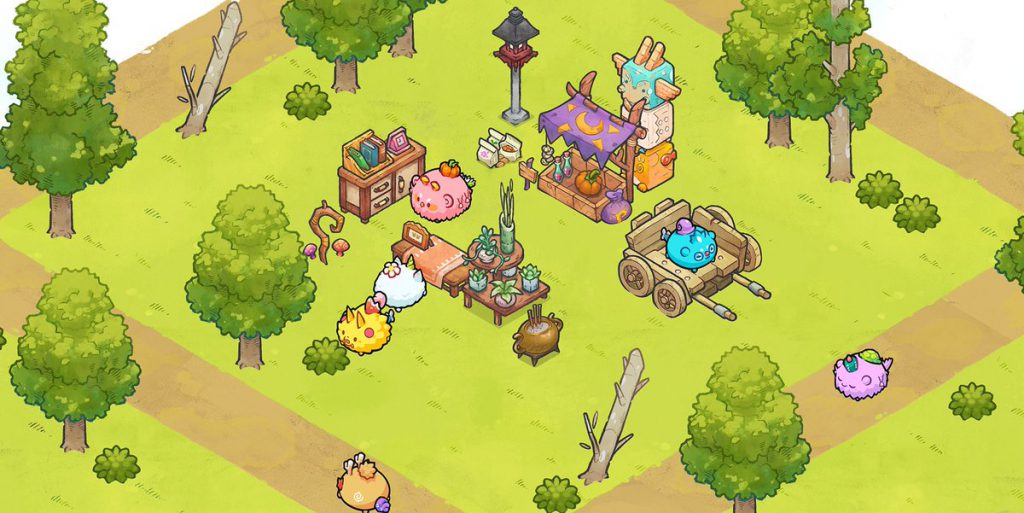 Earn While You Play

What’s better than playing video games? Getting paid to play.

Thanks to cryptocurrency and blockchain technology, these NFT games bring traditional fictional in-game currencies to a new level by tokenizing their assets and allowing players to earn in crypto while playing.

NFT is a unit of data stored on the blockchain, and certifies a digital asset to be unique and therefore not interchangeable. NFTs can be used to represent items such as photos, videos, audio clips, and other types of digital files.

While NFTs have increased in popularity, its application is currently seen heavily in gaming. Players create value through in-game activity and either earn crypto, NFTs, or the appreciation in value of an existing NFT.

Here are 10 of the most popular NFT games you can play right now:

Currently one of the largest crypto NFTs out there, Axie Infinity is a strategy game where users collect, breed and trade adorable collectible creatures called Axies.

By exploring the in-game world, breeding Axies and competing with other players, users become active members of the Axie Infinity economy and help steer game development.

Users need to have three Axies to start playing the game and at the time of writing, the cheapest Axie on the marketplace costs US$383.83.

With rising trading volumes and accelerating growth in its user base, Axie Infinity is projected to earn US$1.2b in revenue from its users this year, surpassing that of Candy Crush’s 2020 total revenue.

Cryptokitties is a collectible game where you collect, breed and trade NFT kittens.

It was one of the very first blockchain games in existence, and its popularity caused a congestion on the Ethereum network back in 2017 when it was released.

Each kitten is a one-of-a-kind and fully owned by the player and cannot be replicated, taken away or destroyed. Players earn rewards by building collections of cats, solving puzzles and participating in catfights.

Dapper Labs, the creator of Cryptokitties and another exceptionally popular collectible card game NBA Top Shot recently raised US$305M in another round of funding.

“As world football has shifted from local supporters to global fanbases, football fans are looking for new ways to be connected to the game, the players and other fans. Nicolas and the team have a unique gaming experience with real-world impact, bringing fantasy to reality. I’m looking forward to helping the team and the Sorare community connect with more football clubs and leagues.”

Sorare is reportedly closing in on another funding round worth $532 million and could bring its valuation up to at least US$3.8 billion.

This comes after a Series A round in February which raised US$50 million in total from investors like VaynerMedia CEO Gary Vaynerchuck and Reddit co-founder Alexis Ohanian.

Gods Unchained is an online digital collectible card game on the Ethereum blockchain.

Similar to the highly addictive Hearthstone, players collect digital cards, build decks and compete with other players online using a variety of tactics and synergies between cards.

Winning in Ranked matches will earn players Flux, an in-game currency which players can use to craft high-quality cards. Players can then trade and auction these cards in the marketplace (run by Immutable) for cryptocurrency.

The company is led by Chris Clay, the former Game Director for Magic: The Gathering — Arena.

Lost Relics is an action-adventure hack and slash dungeon crawler similar to games like Diablo.

Players dive into dungeons, go on quests, hunt bounties and defeat monsters to collect the rarest of loot and level up their character.

Lost Relics utilises the Ethereum-based cryptocurrency Enjin to fuel its in-game world economy and the Enjin wallet to check the player’s inventory and equip virtual items and blockchain items.

Virtual items are like those of traditional games, whereas blockchain items are traded using the Enjin coin which allows players to earn real money.

Initially released in May 2019, Lost Relics is one of the more popular games leading the pack when it comes to dungeon crawler NFT games.

Where Gods Unchained is to Hearthstone, Splinterlands is to Magic: The Gathering. Players buy, sell and trade in-game assets as they would physical cards.

Initially launching in 2018 as Steem Monters, the company rebranded to the name Splinterlands and migrated from the Steem blockchain over to its hard-fork – Hive.

For every match, your rank increases and you unlock higher-level card and rewards, allowing you to compete with players of a higher rank.

What makes this game special is that it uses Brave as its official browser, where players can earn even higher rewards and also Brave’s token – BAT.

At the time of writing, Splinterlands has just reached 10,000 followers on Twitter, and is set for more growth as NFT gaming and the blockchain gains more traction.

If you’ve ever played, Skyrim (what many considered the best video games of all time), The Six Dragons aims to emulate the award-winning game in a similar fashion but with a blockchain twist.

Inspired by the most iconic RPG titles of the past two decades, it features an open-world with over a billion randomly generated dungeons on a 256-square kilometer map.

The Six Dragons uses the Enjin platform to create ERC-1155 assets that players collect and own.

Almost all items in the game are decentralised, which allow players to truly own their in-game items and freely trade them with other players and sell them for real-world value.

The Six Dragons also utilises the Multiverse Founder’s Token, which rewards players for perpetually holding the token, and is usable across different video games within the universe.

Decentraland is a blockchain based online virtual world (like the classic Second Life) where players get to interact with each other, create and own land, NFTs and even artwork.

Thanks to the platform’s decentralized autonomous organization (DAO) which runs on the Ethereum network, players have an active role in the game’s direction and transact using the MANA token.

Nine Chronicles is a free-to-play fantasy roleplaying game, set in a world where players have the freedom to play how they want: exploring, crafting, mining or governing in a uniquely moddable, open-source adventure.

Being open-source, users have the freedom to design levels and features, send contributions through Github and even fork new online worlds and launch new networks with friends.

Nine Chronicles is also coming to Steam Early Access, further supporting the notion that blockchain games are here to stay and even compete with traditional video games.

Created by two-year-old gaming company Gala Games (founded by Zynga. Inc co-founder Eric Schiermeyer), Town Star is a call back to the old times of Facebook games like Farmville.

A competitive farming simulator, Town Star runs on a 6-day cycle where the world map resets and players start from scratch.

Players build farms, hire workers and trade resources to become the most productive farmer on the leaderboard to win GALA tokens, NFTs and in-game items. Back in March, Town Star previously announced a US$1 million prize pool.

Gala Games has recently secured funding from the Binance Smart Chain’s $100 million Accelerator Fund, and is poised to grow the community for Town Star and its other games even further.

Gaming for the Future

Overall, these play-to-earn games do something legacy game systems aren’t able to do, they truly reward and incentivize players for the time and effort spent in playing by allow them to monetize their in-game assets.

For gamers, this is a whole new landscape to play and get paid; and for the blockchain community – it is just the tip of the iceberg of what the technology can do aside from finance.

Also Read: A Look At Axie Infinity, The NFT Game over $240 million of lifetime trading volume