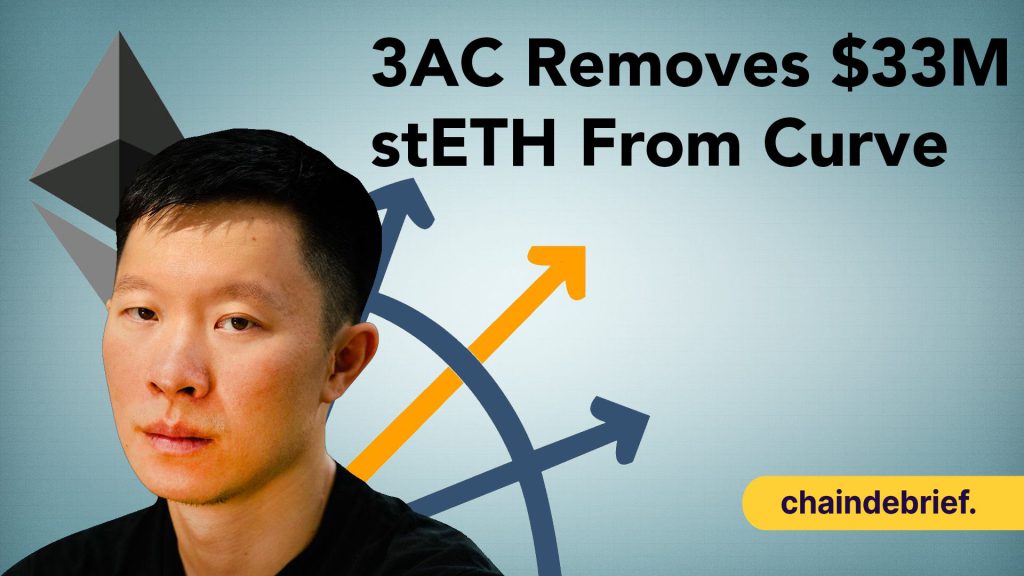 According to on-chain data, the wallet associated with insolvent crypto hedge fund Three Arrows Capital has removed nearly 20,946 stETH worth around USD $33.7 million from the Curve liquidity pool on September 6.

During the same period, the hedge fund also removed 203 WBTC worth USD $4.02 million, 4.05 million USDT worth USD $4.05 million, and 2,462 WETH worth $4.11 million in liquidity from Convex, a platform used to boost rewards for Curve stakers and liquidity providers.

The wallet, marked as “Three Arrows Capital” by Nansen, has been inactive for 10 days since it unwrapped USD $9 million worth of wrapped stETH.

Three Arrows Capital was one of several firms that crashed during this year’s crypto bear market. According to a court filing published in July by its liquidator Teneo, the firm owes its creditors a whopping USD $2.8 billion following a series of highly degenerate leveraged trades with regards to the Terra network that collapsed in May.

On August 24, New York based Teneo secured an important court decision in Singapore that allows it to probe 3AC’s local assets there. At the time, Teneo had control of at least USD $40 million of the firm’s assets.

Could there be another liquidity crisis due to stETH withdrawal?

The last liquidity crisis in June triggered a contagion effect that caused insolvency and bankruptcy of a few big crypto companies. These include Three Arrows Capital, Celsius Network, Babel Finance and Voyager amongst others.

The liquidity crisis was sparked by the withdrawal of stETH from liquidity pools. As a result, the stETH deviated from a 1:1 peg to ETH. Up till today, the peg between stETH and ETH has not been restored due to the crypto market crash and other macroeconomic factors.

Moreover, the stETH is crucial for the PoS Ethereum that is about to come. A further deviation could have severe consequences for the merge and Ethereum.

There doesn’t seem to be any reasoning behind the withdrawal and the public is still unsure of the firm’s next move.

Just last week, Three Arrows Capital moved nearly 10k ETH and over 1.5 million USDT from one of its wallets. The address transferred over 1.6 million USDT to OKX, Huobi, and Binance wallets subsequently.

Could this be a sign that the firm is withdrawing its assets back to exchanges again to possibly offload them?

Should you be interested in being the first to know, you can track all of 3AC’s wallet addresses and their portfolio here. The total value of the portfolio currently sits at USD $87.68 million.