Astroport Vs. TerraSwap: Which Is The DEX On Terra Offering Higher Yields? 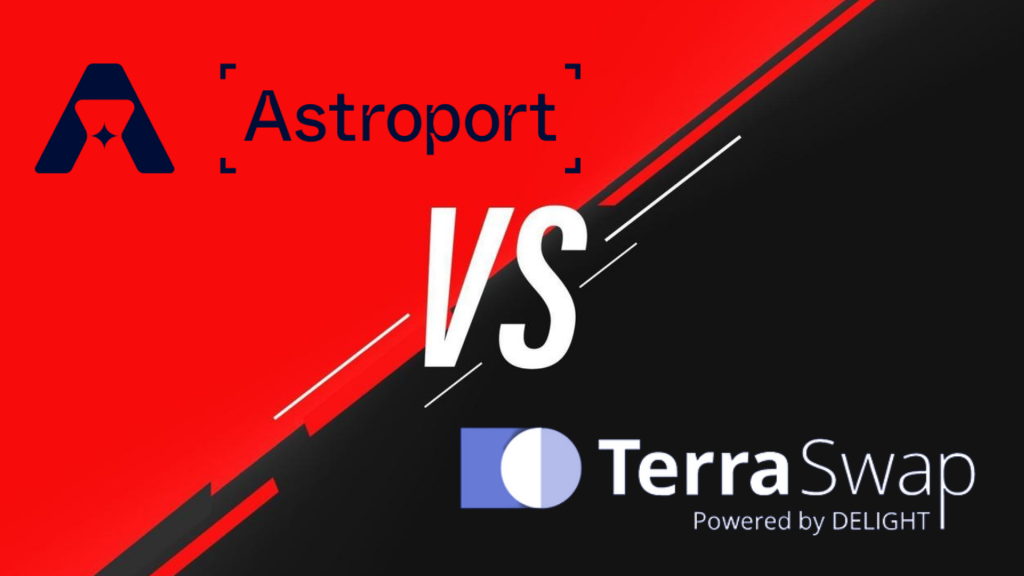 Terra seems to be winning the war of the crypto ecosystem. It recently flipped Solana and Cardano, to become the seventh largest cryptocurrency by market capitalisation.

The fast-growing Terra ecosystem is now flourishing with a multitude of projects ranging from the famed Anchor Protocol to synthetic assets trading platform, Mirror Protocol.

The two biggest Decentralised Exchanges (DEX) on the Terra ecosystem is TerraSwap and Astroport. Here’s a quick article that compares both DEX to see which is superior.

Launched in November 2020, TerraSwap is the first native decentralised exchange (DEX) on the Terra ecosystem that allows users to trade assets directly on-chain.

Like many decentralised exchanges in the crypto space, TerraSwap too uses the Automated market maker (AMM) model pioneered by Uniswap. The pools make prices based on the constant product invariant formula of X*Y = K.

As one of the first Decentralised Finance (DeFi) applications on the Terra ecosystem, it quickly gained support from the community and became a liquidity hub for the ecosystem.

Like most DEXs, TerraSwap also charges a base fee of 0.3% for every trade on the platform. The trading fee would then be distributed to the corresponding liquidity providers.

The design philosophy behind Astroport is simple: to enable decentralised, non-custodial liquidity and price discovery for any asset. To achieve this, Astroport prioritises flexibility above all else; combining various specialised pool types and routing seamlessly across them.

Astroport is a next-generation automated market maker DEX built on the Terra ecosystem. It is widely known as the successor to TerraSwap with many game-changing features.

It was developed by a joint venture of some of the biggest names in the crypto scene from fintech giant Terraform Labs to leading crypto research firm Delphi Digital.

The three key features that set it apart from TerraSwap is:

Other than the traditional constant produce pools, it also introduces two other pools — stableswap invariant pools and liquidity bootstrapping pools.

Another groundbreaking feature of Astroport is its dual liquidity mining. Users will be able to receive both $ASTRO tokens and the third party tokens by farming the LP tokens on the Astro generator.

Astral Assembly is the Decentralised Autonomous Organisation (DAO) of Astroport. Users can stake $ASTRO to get xASTRO which give them the right to vote on proposals and shape the future of the protocol.

Disclaimer: The recorded yield is for the LUNA-UST pair only

At the time of writing, TerraSwap is offering a generous estimated APR of 68.77% and Astroport APR is only at 51.48%.

TerraSwap is clearly outperforming Astroport as it is offering higher APY for LUNA-UST pair liquidity providers.

Does higher APR mean it is better?

Both protocols are very similar in nature and to determine which DEX is superior, we have to look into two important metrics:

TVL is one of the most important metrics used to assess an automated market model DEX because it measures the liquidity of the protocol.

Due to the way the AMM formula works, swapping an asset on an AMM DEX would inherently cause price impact. The higher the TVL of the DEX, the lower the price impact is.

At the time of writing, the current TVL for TerraSwap is over US$500 million and Astroport has more than double the TVL of TerraSwap at over US$1.2 billion.

If we do a side-by-side comparison of both DEXs, we can see that Astroport is the better DEX as it incurs a lesser price impact compared to TerraSwap. This is largely due to the high TVL of Astroport.

At the end of the day, users would choose to trade on Astroport rather than on TerraSwap as it is leading in TVL and the price impact is lower.

Now let’s look at the second metric which is the transaction volume.

Disclaimer: The recorded trading volume is for the LUNA-UST pair only

If we look at the numbers, Astroport is doing significantly better than TerraSwap. There is a large gap in trading volume and Astroport generated over US$150,000 in trading revenue compared to TerraSwap of about US$40,000 only.

Astroport is currently leading as the number one DEX on the Terra ecosystem. Based on the data, it is clear that Astroport is leaps and bounds ahead of Terraswap in terms of both TVL and trading volume.

Furthermore, it is worth noting that Astroport is constantly innovating and adding new features to the protocol while progress in TerraSwap looks stagnant. With that being said, if this situation persists TerraSwap would soon be a thing of the past.

Also Read: What Is Loop Finance? All You Need To Know About This DApp Built On The Terra Blockchain