Ready To Build Your First Web3.0 Application? Thirdweb is Helping You Do Just That 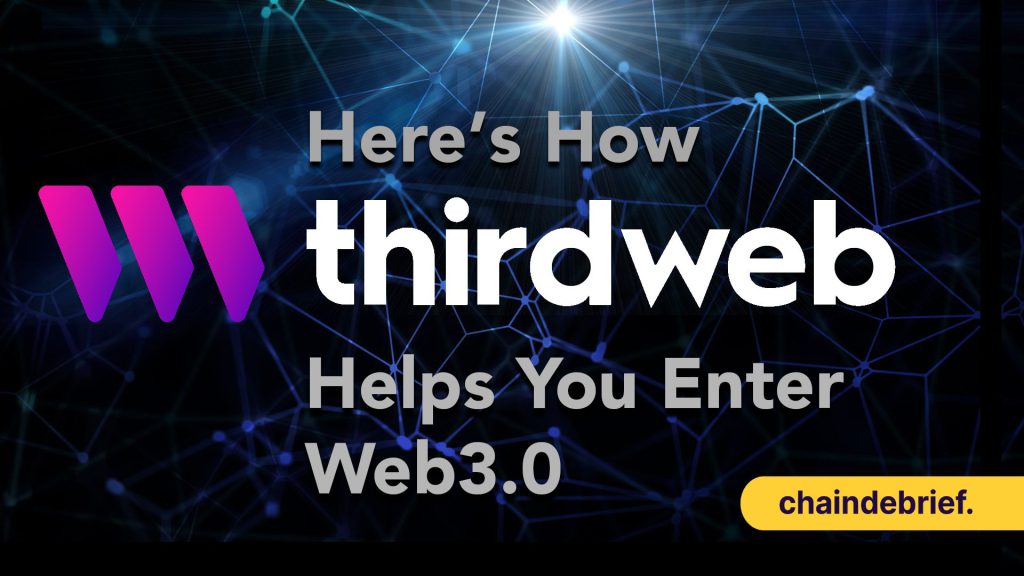 Launched in 2020, Thirdweb offers a framework for developers to build, manage and analyze web3.0 apps. This allows quick and easy building, with or without coding knowledge.

Fast-forward to August 2022 and they recently raised $24M in a Series A funding round which included investors like Coinbase Ventures, Shopify, Polygon, and more. Currently, they have over 55K developers who have deployed over 200K contracts across multiple chains.

Also Read: We Reached Out To Mark Cuban – Here’s What He Has To Say About Crypto

Meet The Team At Thirdweb

Led by Furqan Rydhan and Steven Bartless, Thirdweb has just under 30 employees, including some of the top minds from Web2.0 companies.

Furqan Rydhan (Founder) – Serial entrepreneur who got started selling computer cooling and modification accessories, eventually venturing into technology as the CTO of projects like AppLovin and Bebo.

Steven Bartlett (Co-Founder) – Serial entrepreneur specializing in social media prior to becoming an investor. Founded The Social Chain in 2014 and grew it to over 1,000 employees and a market cap of $500M before making his exit as CEO. Steven runs his own podcast (Diary of A CEO) on Spotify and is also involved in venture capital investments.

Thirdweb – Now Anyone Can Build a Web3.0 App

Thirdweb has the following products:

Prebuilt Contracts – Thirdweb offers a wide range of prebuilt open source contracts which are free to deploy (exc. gas fees), and regularly audited by Macro, whose clients also include Frax or Synthetix.

NFTs – Thirdweb offers contracts for NFT drops on the common ERC721 standard, or even ERC721A and ERC1155.

Tokens – Contracts for creating your own cryptocurrency or arranging a token drop or claim phase.

Marketplace – Contracts that allow you to buy/sell NFTs such as Opensea or Rarible.

Vote – Contracts designed for DAOs to vote on proposals.

Splits – Contracts that allow you to determine a revenue or royalty split between team members.

Thirdweb’s interface is extremely simple to use and allows even non-tech savvy individuals to launch crypto projects by doing just a bit of research. All of these contracts can be managed in their dashboard.

SDKs – Short for “Software Development Kits”, SDKs are essentially a bundle of tools that allow developers to create an end product.

For example, if you want to bake a cake, an SDK provides you with all the ingredients needed.

Thirdweb’s SDK provides developers with all the tools needed to develop web3 applications in various programming languages such as JavaScript, Python or Solidity and SDKs for both front-end development and back-end development

Dashboards – Dashboards are the central place to create, manage and interact with either prebuilt smart contracts built through thirdweb, or externally built contracts.

Connecting a wallet to the dashboard allows projects to access all their contracts in their web3.0 apps. Thirdweb is also supported by Gnosis Safe which adds Multi-sig capabilities for projects with multiple stakeholders.

With Thirdweb being a project that is literally revolved around “selling” smart contract, audits are necessary to ensure no flaws or loopholes in the code that may result in funds being lost for projects using these prebuilt contracts.

Thirdweb used to charge 5% in royalties of whatever deployed contracts earned, but have since removed it, essentially becoming a free-to-use platform to launch web3 apps.

They do receive fees from some enterprise customers, but none of the $1.5M in revenue generated weekly from projects that used thirdweb’s smart contracts.

As a developer, the only fees they have to foot would be the deployment gas fees.

Comparing Thirdweb to BaaS (Business-as-a-Service) is like comparing Wix to Web development service providers in web2.0.

As a straightforward comparison, we’ll use the business services trilemma involving cost, quality and speed.

Cost – Right off the bat, Thirdweb wins in terms of cost, as it is completely free to use their smart contract platform, except for the deployment gas fees.

Quality – In terms of quality, Thirdweb and BaaS providers are pretty on-par with each other when comparing smart contracts.

It is arguable that Thirdweb’s contracts have an edge considering the team is focused only on their smart contract offerings while for BaaS providers, they have to deliver an end-product which also involves customizing the contracts for each customer.

Speed – Speed depends on what the end-product is, but if we ignore the expertise of the developer using Thirdweb, BaaS providers have an edge in terms of speed.

Logically speaking, BaaS providers who developed their library of smart contracts know exactly what to edit for each client.

For developers using Thirdweb, they would have to read through the documentation to learn different parts of their contract and how to use their platform.

While it is unclear how Thirdweb currently monetizes its services after removing the 5% royalties, it definitely seems like its leaning towards a Freemium model after they announced the potential introduction of advanced paid features in the future.

Additionally, with investments and partnerships with Platforms such as Shopify, its only a matter of time before Thirdweb SDKs are implemented into Shopify after they introduced NFT stores and token-gated stores.

It is possible that Thirdweb earns a small cut on each NFT sale or product sale on token-gated stores too.